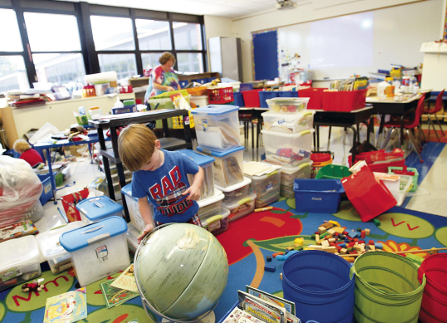 Jonah Hilgert plays as his mother, first-grade teacher Toni Fry-Hilgert, gets her classroom ready for the first day of school, in Alton, Ill., this fall. Federal aid to schools is among the items that could be hit by a federal government shutdown. (AP)

With the federal government on the brink of a shutdown next week, states are bracing for fallout that could mean big disruptions in some programs, particularly if the shutdown continues more than a week, according to two agencies that monitor state government.

Much of the assistance states get from the federal government goes to mandatory programs that would not be suspended, including Medicaid and Social Security. Other programs, which already have received their funds, also would not be affected, including Title I education grants, special education grants and Workforce Investment grants to train young people, according to a report from the Federal Funds Information for States (FFIS).

But some major programs would be affected by the shutdown, FFIS said, including:

“All discretionary programs (anything not mandatory) could definitely be affected,” said Melissa Loeb, who prepared the FFIS report. “There won't be new funding provided (during a shutdown). Whether states have the ability to keep the programs running without federal funding is a different issue. What that means for states in practical terms varies on a state-by-state and program-by-program basis.”

One of the most difficult things about the looming shutdown is the uncertainty it creates at the state level, said the National Association of State Budget Officers in a brief. That makes planning difficult and can also have “negative economic effects, which are difficult to measure,” NASBO said.

Although federal spending varies widely across the states, as shown in a recent Pew report, some states that are more dependent on federal contracting and federal employees say a shutdown, depending on its length, could cost them dearly in lost tax revenue and economic activity.

Virginia, for example, with its large number of federal contractors in the Washington, D.C., suburbs, is anticipating a significant loss of revenue, according to Gov. Bob McDonnell. He told area radio station WTOP that a shutdown is “not the right way to go.” His office issued a memo counseling state agencies to come up with budget-cutting plans to prepare for the possibility of losing federal funds. In Maryland, also heavily dependent on federal money, budget officials estimated the state could lose $5 million in revenue a day, and businesses could lose $15 million a day.

The rollout of the new Affordable Care Act can continue, NASBO said, because the federal government will still have funds available from past appropriations to continue with that work past any shutdown. States are preparing to launch their health insurance exchanges Tuesday where those who don't now have coverage can compare and purchase insurance.