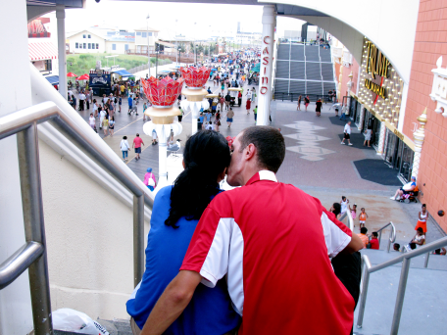 A couple shares a kiss on the steps of the Taj Mahal Casino Resort in Atlantic City, N.J. All 12 casinos in Atlantic City are teaming up with Internet gaming companies in anticipation of legalized online gambling there. (AP)

Nevada was the first state to legalize online poker earlier this year, but New Jersey is poised to rake in a bigger jackpot from Internet gambling when Atlantic City's 12 casinos offer a whole menu of legal online table games along with slots later this fall. Meanwhile, Delaware's three casinos are set to offer cash winnings for online slots, poker, blackjack and roulette by the end of October.

The three states are jockeying to see which one can best capitalize on this next frontier in gambling —and gambling revenue. All three will allow anyone within their borders to use their computers to gamble online at state-sanctioned websites.

And don't forget smartphones. Nevada gamblers can already use their smartphones to play online poker, and Atlantic City players will be able to bet on their games that way later this year. Wagers in Delaware will have to wait until 2014 to use their phones.

Estimates vary widely on how much online betting is occurring and how much money states could collect by legalizing and taxing it. By one count, Americans spent $2.6 billion on illegal offshore gambling websites in 2012, according to research by H2 Gambling Capital, a gambling research firm that looked at the issue for the American Gaming Association.

The amount states collect will depend on how they tax and regulate these operations, and each one has a different plan.

“New Jersey is truly on the threshold of breaking through a brand new industry,” said Israel Posner, executive director of the Lloyd D. Levenson Institute of Gaming, Hospitality and Tourism at the Richard Stockton College of New Jersey.  Nevada's online gambling law is too limited, he said, and Delaware's market is too small.

These states legalized online betting after the U.S. Justice Department reversed its ban on Internet gambling in December 2011. Several other states, including California, Illinois, Iowa, Massachusetts and Texas, considered proposals related to online gambling this year, but none legalized it.

Keith S. Whyte, executive director of the National Council on Problem Gambling, said states already strain to handle the estimated $7 billion annual social cost of gambling-related addiction, bankruptcy and crime. All of these problems could be exacerbated by legalized online gambling without proper consumer protections and extra funds to help those with gambling problems, he said.

Up to 9 million adult Americans have problems with gambling as do some 500,000 adolescents between the ages of 12 to 17, Whyte said.

While Nevada gamblers are already playing online poker for money, only two gaming companies are offering it so far. Station Casinos rolled out Ultimate Poker at the end of April and is near dealing out its 20-millionth hand of legal online poker. Caesars Interactive just last week launched its World Series of Poker website.

Delaware's three casinos in late August opened web portals on Facebook that offer slots, poker, blackjack and roulette, but no cash for winners. The state said this “free play is a prelude to the start of the first state-authorized online gaming systems in the country,” targeted to launch by Oct. 31.

Once Delaware's full online gaming goes live, gamblers will go straight to gaming websites. First, though, they will be required to go through verifications to ensure that players are of legal age and are physically within the state borders when they play.

Atlantic City Gears Up for Nov. 26

The stakes are expected to be big in New Jersey, where all 12 casinos in Atlantic City have already teamed up with Internet gaming companies to help them offer online gambling this fall.

Tropicana Atlantic City, for example, announced in August it is working with Gamesys, which became the first company in 2012 to offer real cash wager games on the Facebook platform in the United Kingdom

Lisa Spengler, a spokeswoman for the New Jersey Division of Gaming Enforcement, said the state must approve these agreements between the casinos and Internet gaming partners. She declined to say how many the state has already approved, saying that information will be available closer to the “go-live date.”

New Jersey hasn't scheduled a launch date, but the statutory deadline is Nov. 26.

Looking Ahead to “Compacts”

The three states plan to seek “compacts” with the other states that approved online gambling so that bettors can play the games across state lines. The compacts will determine how the states will split revenues.

“I can't enter into any compacts or agreements with other states until the Gaming Control Board and Gaming Commission adopt regulations to allow me to do so,” Nevada Gov. Brian Sandoval said earlier this month on VegasInc.com, a news website that covers Las Vegas. Sandoval said Nevada has had preliminary conversations with other states, “but there is nothing I can do until the regulations are adopted, which I understand may happen next month.”

Spengler in New Jersey said reciprocal agreements will be addressed in the future once online gambling gets up and running.

Likewise in Delaware, Cook, the finance secretary, said the state will look into compacts with other states in 2014.

Gambling revenue is a source of revenue for all states but Hawaii and Utah, which do not allow casinos or lotteries. The first legalized gambling in the U.S. started in the deserts of Nevada and on the Jersey boardwalks, but later competition has hurt these two states.

As Stateline reported, for the fourth year in a row, Nevada collected the second-highest amount of tax revenue from casinos in 2012, nearly $869 million, following Pennsylvania's $1.4 billion, according to the latest report from the American Gaming Association (AGA), a trade group that represents the commercial casino industry.

The amount states could collect on Internet gaming will depend on how they tax and regulate online gambling. So far, the three states that have approved it are taking different tactics:

These different approaches are one of the reasons the AGA and others are urging Congress to pass federal legislation. “Americans account for nearly 10 percent of the global online gaming marketplace at a time when the business is illegal in all but three American states,” Geoff Freeman, the group's president, said in a statement.  “It is past time for policymakers to put necessary safeguards in place.”