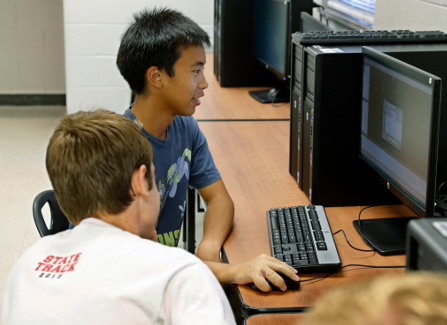 Alex Tu works on a computer during a computer science class at Carl Albert High School in Midwest City, Okla. Average SAT scores have dropped by 20 points since 2006. (AP)

Fewer than half of the students who took the SATs in the class of 2013 were academically prepared to take college-level courses, according to new figures released by the College Board, which administers the college entrance exam.

Only 43 percent of those who took the test received a total score of 1550 or higher out of 2400. According to the College Board, students who score at least 1550 are likely to earn a grade point average of B- or above in the first year of college. The percentage of students deemed ready for college has remained essentially stable over the last five years.

College Board President David Coleman said the stagnant scores should be considered a call to action.

“We must dramatically increase the number of students in K-12 who are prepared for college and careers,” Coleman said. “Only by transforming the daily work that students do can we achieve excellence and equity.”

Coleman was one of the principle architects of the Common Core State Standards, which are reading and math standards that have been adopted by all but a handful of states establishing what students should know by the end of each grade level in order to graduate from high school ready to enter college or the workforce.

Critics of the SATs argue the exam serves better as an indicator of a family's income level than as a predictor of a student's future success.

Bob Schaeffer, of the National Center for Fair and Open Testing (FairTest), which is critical of standardized tests including the SATs, said that average SAT scores have dropped by 20 points since 2006, when the exam began to include a writing section. He also said gaps between racial groups have widened since that time.

Support for the Common Core State Standards, Schaeffer said, is “based on the false notion that the way to make kids jump higher academically is to raise the bar, yell at them and threaten to punish their teachers. How much more evidence do policymakers need that this is a failed strategy?”

According to the College Board, the number of underrepresented minority students taking the SAT grew slightly from the previous year. African-American, American Indian and Hispanic students made up 30 percent of SAT takers in the class of 2013, up from 27 percent five years ago.

In addition, the percentage of African-American students who scored 1550 or higher rose from 14.8 in 2012 to 15.6 percent in 2013. For Hispanic students, the percentage meeting the benchmark grew from 22.8 percent to 23.5 percent.