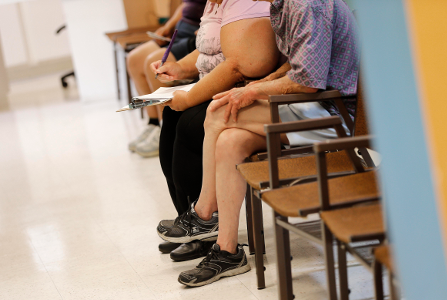 Uninsured patients fill out paperwork at Wesley Health Center in Phoenix. HHS released its projections about the cost of insurance on the new health exchanges that launch Oct. 1. (AP)

The cost of health insurance on the Affordable Care Act exchanges shows monthly premiums varying widely from state to state, depending on the kind of plan purchased and whether an individual or family qualifies for government subsidies.

In the 36 states in which the federal government will run the exchanges, the Department of Health and Human Services said Wednesday the average cost of the benchmark “silver plan” was lower than expected, at $328 a month. But averages are misleading, since virtually no one will pay that exact price.

The exchanges  – essentially a marketplace for health insurance plans – are scheduled to launch next Tuesday.

“I can tell you right now that in many states across the country, if you're, say, a 27-year-old young woman, don't have health insurance, you get on that exchange, you're going to be able to purchase high-quality health insurance for less than the cost of your cellphone bill,” President Barack Obama said Tuesday at a health care forum in New York City with former President Bill Clinton.

The administration projected that if that 27-year-old was a low-earner and qualifies for a subsidy from the government to buy the mid-range “silver” insurance, it would cost an average of $145 a month in almost every state. That could drop further if the individual chose a plan with fewer benefits. Without the subsidy, the premiums for the “silver” plan range from a high of $342 in Wyoming to a low of $161 in Tennessee. Low-coverage “bronze” plans could be had for premiums of less than $100 in most states, with subsidies.

For a family of four making $50,000 annually that does not qualify for subsidies, the monthly premium for the “silver” plan ranges from a high of $1,237 a month in Wyoming to a low of $584 in Tennessee. However, if the family qualifies for government help, the cost could drop to as low as $282 monthly.

HHS provided several charts, by states and large cities, breaking down the estimated average monthly premiums for a 27-year-old earning $25,000 and for a family of four earning $50,000, both with and without federal subsidies.

Here's another example: In Texas, the “silver” plan would cost $727 for a family of four without subsidies. That drops to $282 after subsidies. But if the family opts for a low-cost “bronze” plan, and gets the subsidy, the cost would be only $57 monthly. In Mississippi, one of the higher-priced states, the “silver” plan costs $1,069 a month for a family of four. That drops to $282 after subsidies. But it could go as low as $28 a month, under a subsidized “bronze” plan.

However, some of the low-end plans have high deductibles or co-pays. The variations in price by state are due to the cost of health care, competition among insurers and many other variables like family size, age and tobacco use.

Not all families will choose the middle-of-the-road plan. So-called “gold” plans will cost even more.

Subsidies are available to those who do not have health insurance through their jobs and whose income is between 100 percent and 400 percent of the federal poverty level. That's between a low of $11,500 for a single person up to $94,000 for a family of four. The amount of the subsidy varies with income.

Critics say all the variables will make the program hard to navigate. Obama's launch of the program was the first foray into a six-month-long campaign to sell the plans to consumers. Meanwhile, conservative Republicans, led by Sen. Ted Cruz, R-Texas, are fighting to “defund” the ACA altogether.

In addition to premiums, consumers will have to evaluate co-payments and deductibles in choosing their plans. The administration touted the choices available to consumers, noting that there is an average of 53 “qualified health plans” across the states. But some states have far fewer choices. Alabama has only seven plans, while New Hampshire and West Virginia have just 12. By contrast, Arizona has 106 plans available.