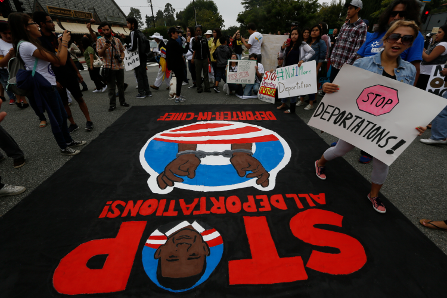 Advocates for immigrants have gained ground in the last six months in their long fight against a U.S. policy allowing federal immigration officials to screen suspects in local jails. Now they are close to notching their biggest victory yet.

In California, the home of nearly 2.5 million unauthorized immigrants, lawmakers this month once again passed the so-called Trust Act, which would block local police from holding suspects for immigration agents when they would otherwise be free to go.

Gov. Jerry Brown, a Democrat, has until mid-October to decide whether to sign the law. The governor vetoed a similar measure last year because, he said, the proposal did not include enough exceptions for suspects charged with violent crimes. This year legislators worked with the governor's staff to address Brown's concerns. Brown has not said publicly whether he will sign it.

Other states, counties and cities across the country also have pushed back against the federal immigration enforcement program known as Secure Communities, which has led to the deportation of 280,000 people in nearly five years.

When a person is arrested, local police send fingerprints and other information to U.S. officials so they can determine whether the person in custody is wanted for any other crimes. The Secure Communities initiative allows the federal government to use that information to check a suspect's immigration status.  If immigration officials determine that the suspect is in the country illegally and dangerous, they can ask police to hold the suspect for up to 48 hours until federal agents can bring them into custody.

“We're finally seeing the tide turning against the idea that it is good to use police as deportation agents,” said Chris Newman, legal director for the National Day Laborer Organizing Network, which supports the local limits.

But Jessica Vaughan, director of policy studies at the Center for Immigration Studies, a group that supports tighter controls on immigration, worries the trend will compromise public safety.

“It is definitely concerning, especially for people in these communities. The result is going to be that fewer criminals are going to be removed from the United States,” Vaughn said.

Liberal states and localities have fought Secure Communities since its introduction five years ago.

The latest phase started when the home counties of Chicago and San Jose, Calif., announced two years ago they would only honor the Immigrations and Customs Enforcement “holds” in very narrow circumstances.

Since then, the idea has spread to other cities and, this year, to statehouses:

Critics say the jailhouse screenings lead to the deportation of some people who pose little threat to the public. But the Obama administration says Secure Communities and related programs remove dangerous immigrants from the country.

ICE “has implemented clear priorities that focus on convicted criminals and other public safety threats, on those who repeatedly violate our immigration laws,” said ICE spokeswoman Dani Bennett.

“The federal government alone sets these priorities and places detainers on individuals arrested on criminal charges to ensure that dangerous criminal aliens and other priority individuals are not released from prisons and jails into our communities,” Bennett added.

Vaughan, from the Center for Immigration Studies, said she thinks the reactions against Secure Communities are more of a “fad” on the local and state scene than a trend. Many localities will reverse themselves, she predicted, once they face controversies over crimes committed by released immigrants.

State and local officials will also see their actions have little effect on the number of deportations nationally, she said.

“It's kind of a statistical blip nationally, but … in a neighborhood it's not, if that person is wreaking havoc as a gang member or a drunk driver,” Vaughan said. “If that's your neighborhood, you care a lot.”

California legislators listed several concerns about Secure Communities in the measure they sent to the governor.

They said it added more work to local police agencies, did not cover local costs, discouraged witnesses and victims from reporting crimes for fear that they or members of their families would be deported, and did not provide enough legal protections for detainees.

Newman, the advocate for the day laborers, said federal immigration officials have repeatedly changed their story about the goal of the program.

ICE initially signaled the program was voluntary. But when Illinois, Massachusetts and New York tried to withdraw, federal officials said states and localities had no choice but to submit the fingerprints of criminal suspects for screening. Later, Newman said, the agency said the program was aimed specifically at dangerous offenders. But it had to overhaul its criteria because too many low-level suspects were targeted.

The latest confusion is over the options for states and localities once ICE determines it wants to take custody of a suspect.

California Attorney General Kamala Harris, a Democrat, announced last December that local police agencies “can make their own decisions” on whether to comply with ICE holds. If the holds were mandatory, she said, they would violate states' rights under the U.S. Constitution's 10th Amendment.

Harris' memo gave proponents of the Trust Act legal backing for their renewed push in the legislature this year.

The California State Sheriffs' Association is leading the opposition to the Trust Act. Several law enforcement groups and leaders dropped their objections this year, as legislators made changes to allow more suspects to be detained. But the sheriffs' group still wants a veto.

“This would require offenders that have been subject to prior removal orders, previously deported from the country, or have been charged with serious and violent felonies to be released into the community,” the sheriffs said in a statement.

Young immigrants staged a protest and sit-in at the association's Sacramento offices last week, and four people were arrested.

“They needed to hear from us, immigrant youth and our families, because by opposing the bill, we believe they are then supporting the deportation of our families,” said Neidi Dominguez, the campaign manager for the California Immigrant Youth Justice Alliance, which organized the demonstration.

Dominguez said the sheriffs should not be concerned with suspects who have no previous criminal convictions, even if they have had prior immigration violations. “It has nothing to do with criminal due process but everything to do with immigration, which is not what their job is,” she said.

But other law enforcement leaders have lined up behind the Trust Act. David Bejarano, police chief of Chula Vista, a city south of San Diego, urged the governor to sign the bill.

Bejarano said he worries victims and witnesses will not report crime to local police if they worry they might be deported as a result. In domestic violence situations, for example, police must often question both the accuser and the accused.

“Law enforcement agencies, especially along the U.S.-Mexican border, we've been very successful in keeping our cities safe,” the police chief said in an interview. “A big part of that is the … relationship we have with everyone in the community, regardless of their immigration status.”

RELATED
Topics
Justice Immigration Federal Impact
About Stateline
Stateline provides daily reporting and analysis on trends in state policy.
About Stateline
Media Contact
Grace Jensen-Moran
Senior Associate, Communications
202.540.6804
Sign Up
Sign up for our daily update—original reporting on state policy, plus the day's five top reads from around the Web.