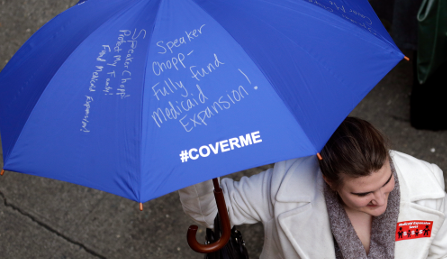 Demonstrators in Seattle opened umbrellas in unison to show their support for expanding Medicaid coverage under the new federal health law. A new report says the expansion will lead to a spike in spending next year, but states will be spared for the first several years. (AP)

Medicaid spending will climb next year by more than 12 percent to $490 billion, largely because of expanded eligibility under President Barack Obama's new federal health law, according to a new report.

The state and local share of the increase (Medicaid is a joint state-federal program) will be minimal, because under the new health care law the federal government will cover 100 percent of the costs of the Medicaid expansion for three years. After that, however, the federal contribution will taper off until it reaches 90 percent in 2020.

The annual report by the Centers for Medicare and Medicaid Services (CMS) predicts that state and local spending on Medicaid will increase next year by just half a percent, from $187.6 billion to $198.1 billion. However, by 2022, state Medicaid costs are expected to rise to $340 billion, an increase of about 81 percent.

CMS took into account the fact that so far, fewer than half the states have elected to expand Medicaid. Its estimate assumes that in future years, at least some additional states will choose to do so.

CMS predicts that by 2022, federal, state, and local governments will spend $2.4 trillion on health care, accounting for 49 percent of all U.S. health spending, public and private. In 2012, the government share of overall health spending was 45 percent. Those figures include Medicare and other government health programs in addition to Medicaid.

In addition to expanding Medicaid eligibility, the new health care law will require most Americans to have health insurance. The report projects that 11 million currently uninsured Americans will become insured next year, most of them through Medicaid or new state health insurance exchanges where they will be able to buy private, federally subsidized health insurance.

CMS also cites an improving economy and an aging population for the expected higher growth rate in health spending.