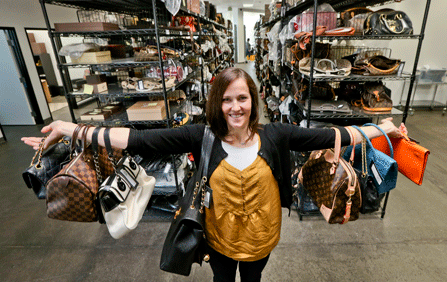 Sarah Davis poses with bags at her Internet company's warehouse in Carlsbad, Calif. Her business could be forced to collect sales taxes for online purchases if legislation passes Congress. (AP)

“We're very pleased by the leadership Chairman Goodlatte is showing on this important and bipartisan issue,” said Neal Osten, director of the National Conference of State Legislatures' Washington, D.C. office.

A Virginia Republican, Goodlatte had been skeptical of the legislation, which passed the Senate 69-27 in May, concerned that collecting the sales taxes might be burdensome for small Internet businesses. He outlined a list of principles Wednesday for any legislation on the issue, including making the tax collections simple and inexpensive, particularly for small Internet sellers. He also called for no new taxes to be established by the act and for protection of consumer information.

The National Governors Association, which backs the legislation, praised Goodlatte's move. NGA officials say consumers have been getting away with not paying taxes on Internet purchases.

“The National Governors Association applauds Chairman Goodlatte for his focus on this critical state-federal issue and for making it a priority of the committee,” the NGA said in a statement. “Marketplace Fairness is common-sense legislation that upholds the principles of federalism and levels the playing field between Main Street and e-street. It helps states, encourages competition and preserves Main Street jobs.”

The Internet sales tax issue stems from a 1967 U.S. Supreme court decision that said companies need a physical presence in a state for that state to impose taxes on its sales. But in the Internet age, when purchases increasingly are made online, stores with a physical presence are losing business to online competition. Not collecting sales taxes gives a price advantage to online retailers, backers of the Marketplace Fairness Act say.

The legislation, supported by President Barack Obama, would allow states to require remote retailers to collect state sales taxes. Online retailers had been the biggest opponents of the legislation, but that has begun to change with the decision of Amazon and Walmart to support the bill. The big companies say it's unfair to require businesses to collect sales taxes only in states where they have a physical presence.