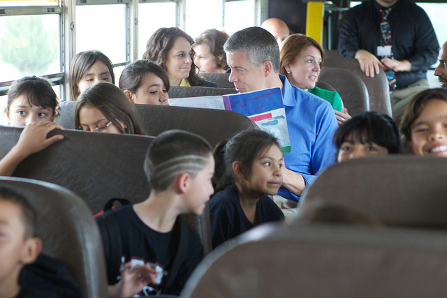 COLUMBUS, N.M. — When classes end for the day at Columbus Elementary School in this tiny desert town, roughly three-quarters of the students board buses to return to their homes — in Mexico.

On the other side of the customs station three miles away, waiting parents crowd the main street of Palomas, Mexico.  Crossing guards from the school block all traffic along the highway going south, so that students can safely walk through the checkpoint.

The students are U.S. citizens, even though many of their parents are not. Many of the children were born in a nearby New Mexico hospital, because the closest Mexican hospital to Palomas is an hour and a half away.

“Those children … have dual citizenship until they are 18. Well, which citizenship do you think they are going to ask for? The United States. Would you rather have them educated and come and work here, or on welfare?” asked New Mexico state Rep. Dona Irwin, a Democrat who represents the border region.

New Mexico is unique in how openly its schools embrace American children living in Mexico, but all along the U.S.-Mexican border, children cross international lines on their way to school every day.

The children's commute illustrates the complexities of life in border regions — complexities that seldom get mentioned in national debates over immigration and border security.

“You have something I've just never seen before,” said U.S. Education Secretary Arne Duncan in a video, taken shortly after he visited the Columbus school last week as part of his tour to kick off the school year. “For parents to have the courage to drop their 6- and 7- and 8-year-olds off, to send them here to chase the American dream… It's a remarkable profile in courage.”

“Whatever we can do to support this great work, we want to do it,” Duncan said.

In Columbus, the back and forth between Old Mexico and New Mexico is routine. Locals from both sides cross regularly to work or shop. Sightseers visit Columbus to see the state park commemorating Mexican revolutionary general Pancho Villa's attack on the town in 1916. Then the tourists often head south to Palomas, where they can dine or shop for Mexican souvenirs.

Illegal immigration in these parts is rare, though it may look otherwise: Ranchers have added barbed wire to the low-slung border fence just a few miles from the port of entry. But the barbed wire on top is there to keep out Mexican cattle, not to keep out immigrants.

A nearby processing plant for Carzalia Valley Produce depends heavily on Mexican workers, who legally cross the border every day, to get its signature sweet onions to American consumers.

And for generations, students from Mexico have crossed the border to go to school in Columbus. Irwin, the state legislator, recalled that her son was the only one in his eighth-grade class who did not grow up in a Spanish-speaking household.

“I wouldn't trade what they got there for anything,” she said, noting that both of her children are bilingual. “We're proud of that.”

Hipolito Aguilar, deputy secretary of the New Mexico Public Education Department, said the state's constitution requires school districts to educate all school-age children. A state law specifies those children “shall have a right to attend public school within the school district in which he resides or is present.” That includes students who cross into the district from Mexico.

“We believe it is so important to educate children that, if they show up for it, we'll provide it to them,” Aguilar said.

The same open door applies to students from Arizona and Texas, he said, who sometimes live closer to schools in New Mexico. New Mexico allows school districts to charge out-of-state students tuition, but that decision is up to the local jurisdictions.

The state's school funding system gives local officials few reasons to turn away additional students. The money comes from the state, and it depends largely on how many students are in class on key dates, Aguilar said. There is no penalty for out-of-state students.

But the students from Mexico can make teaching more difficult, and the Columbus school received low state marks because of its low performance on standardized tests. The border crossers are often poor and start school with little exposure to English, teachers told Duncan, according to the Las Cruces Sun.

Steven Camarota, the director of research at the Center for Immigration Studies, a group in Washington, D.C., that favors more restrictions on immigration, said New Mexico's funding mechanism helps defuse what could be a more controversial practice in Columbus.

“That school's funding sources are so decoupled from the local community, that whatever the burden these kids create doesn't become much of an issue. If it was locally funded, it would be,” he said.

He also said it was a reminder of the consequences of U.S. immigration policy, which gives babies born in the country citizenship.

Other border states have strict residency requirements.  In California and Texas, for example, parents must prove they live in the school district when they register their children.

Texas relies on local districts to enforce their residency requirements, said DeEtta Culbertson, a spokeswoman for the Texas Education Agency. But in Arizona, where students have more freedom to attend schools outside of their home district, the state has taken a more active role.

As Arizona lawmakers debated a sweeping measure to combat illegal immigration in 2010, the Arizona Department of Education cracked down on border-crossing students.

The agency, then headed by a Republican candidate for attorney general, tried to recoup $1.2 million in state aid from the tiny Ajo School District, because, it said, the state paid the district to educate between 78 and 108 students over the previous three years who were not state residents.

The penalty would have been nearly half of Ajo's annual budget. The district fought the state agency and eventually settled for $600,000, said Ajo superintendent Robert Dooley. The fine came out of additional taxes, not out of the schools' budget.

Dooley said the school district lost 25 to 30 of its450 students after tighter residency checks were put in place.

Experts do not know exactly how many students come from Mexico to American schools every morning. But they agree it is a significant number.

“Thousands of students from Ciudad Juarez, Chihuahua cross on a daily basis to El Paso, Texas to go to school,” said Olga Bashbush, a spokeswoman for the U.S. consulate in Juarez. Some of those students are U.S. citizens, but others are Mexican citizens who use visas to cross the Rio Grande to attend private schools, she noted.

Gabriel Flores Viramontes, a legislator in the Mexican state of Chihuahua and the outgoing chair of the Border Legislative Conference, knows the drill well. He graduated from a public high school in El Paso, where his family owned a house, before getting degrees from Loyola University in New Orleans and then from Harvard University.

Now, Flores Viramontes takes his three children to parochial school in El Paso, which requires a daily wait of up to 45 minutes to cross the bridge into the U.S. He wants them to learn English. His wife's father and grandfather also went to school across the border, he noted.

“If you know English, it opens a lot of doors,” the legislator said.