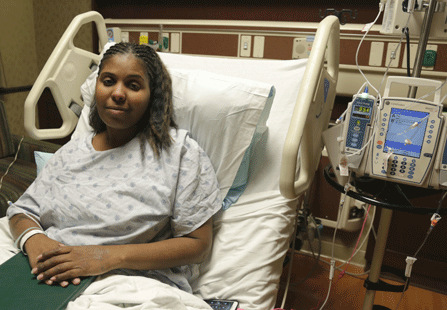 An Illinois Medicaid recipient rests in a suburban Chicago hospital. The number of people without health insurance is expected to drop dramatically in 2014, driven in part by an increase in the number of people covered under Medicaid and other government programs. (AP)

On the eve of the federal health law's launch date, a new report from the U.S. Census Bureau shows a small decline in the number of people who lack health insurance and an increase in the number insured by public programs, including Medicaid and Medicare.

Overall, the percentage of people without health insurance declined to 15.4 percent in 2012 from 15.7 percent the year before, while the total number of uninsured people fell to 48 million from 48.6 million in 2011.

Children were the biggest winners: The uninsured rate for people younger than 18 dropped to 8.9 percent in 2012 from 9.4 percent in 2011.  Young people from 19 to 24 also saw big gains in coverage. Starting in 2010 when the Affordable Care Act was signed, young people up to age 26 were given the option of staying on their parents' insurance policies. The biggest surge in coverage came the first year, but there were further gains between 2011 and 2012.

Aging baby boomers helped swell the ranks of those insured under Medicare, which covers people who are 65 or older. But enrollment in Medicaid and the state Children's Health Insurance Program (CHIP), both of which cover low-income Americans, also increased significantly. In 2012, Medicaid enrollment hit 50.9 million and Medicare rolls rose to 48.9 million.

Since 1999, private insurance, including employer-sponsored coverage, has dropped from 73 percent of total coverage to 63.9 percent, while public insurance has risen from 24.2 percent to 32.6 of total coverage. The uninsured rate during that time period rose from 13.5 percent to 15.4 percent.