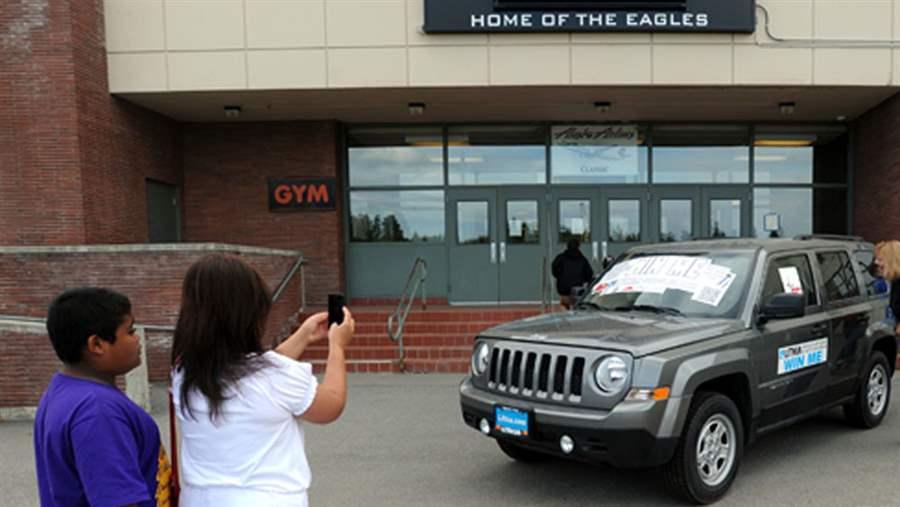 Students and parents take a look at a Jeep Patriot an Anchorage, Alaska, school district will award to a student with perfect attendance. A growing number of school districts and states are increasing their focus on students who are chronically absent from school. (AP)

School attendance is about more than figuring out who is playing hooky.

Now a growing number of states and school districts are increasing their focus on students who are “chronically absent” from school—whether the absences are excused or unexcused.  States have different definitions of chronic absence, but it is often defined as missing at least 10 percent of the school year for any reason.

Chronic absence is a key indicator for problems such as dropping out and lower academic achievement, according to recent research, so educators are hoping to identify students early enough to intervene.

“When it comes to instructional time, a day missed is a day missed,” said Hedy Chang, the director of Attendance Works, a national and state initiative promoting awareness of chronic absence. “If you're not there, you can't benefit from instruction.”

A study last year by Robert Balfanz and Vaughan Byrnes at Johns Hopkins University's School of Education estimated that 10 percent to 15 percent of U.S. students, or between 5 million and 7.5 million of them, are chronically absent.

Chronic absence is far more prevalent among children from low-income households—the very students who benefit most from attending school, research shows.  In poor, urban areas, as many as one-third of students can be chronically absent. Data from Florida suggest the problem is most pronounced in a small number of schools, according to the Johns Hopkins study. In Florida, 15 percent of schools have half of the chronically absent students in the entire state.

The impact of chronic absence is significant. Research has shown, for example, that chronic absence in kindergarten is associated with lower academic performance in first grade; students who were chronically absent in Pre-K and kindergarten in Baltimore were more often absent in later grades and more likely to repeat a grade; and in Georgia, a 3 percent improvement in attendance, or five more days, would have led more than 55,000 students to pass standardized tests.

Advocates note that all the school reform in the world won't help students who aren't in school.

Chang says states can play an important role in investigating chronic absence by helping school districts monitor it, identifying where there is a problem and developing effective interventions.

In Providence, R.I., for example, when teachers learned that parents working the overnight shift were failing to bring their children to school because they were falling asleep, a school created an early care and breakfast program to allow parents to drop off their children before they went to bed. In Springfield, Mass., schools created walking school buses – groups of children walking to school together led by parents and teachers – to help children get to school safely.  States can also encourage schools to report attendance data to families, who may not be aware of the significance of missing school days, particularly for the youngest students.

Chang said that states that investigate chronic absenteeism are often surprised at the extent of the problem.

According to a policy brief to be released Monday by Attendance Works:

Among the states that are taking action to identify and address chronic absence:

Individual school districts across the country also have tackled chronic absence, many quite successfully. In New York City, Mayor Michael Bloomberg convened an Interagency Task Force on Truancy, Chronic Absenteeism and School Engagement, which has launched a wide-ranging campaign to get children to school, including wake-up calls from celebrities, mentors to encourage and help students to attend school daily, and attendance meetings where teams of administrators and community partners work to boost attendance.

For example, when social workers visited the homes of about 250 elementary school students in Baltimore who had missed at least 40 days of school, they learned that about a third of the children had asthma but no inhalers. Students have made videos and posters to encourage students to attend school. Volunteers contact chronically absent students and their families to see if they can help, and every school now has the technology to track attendance for both the school and individual students.

So far, those efforts have helped reduce chronic absenteeism among middle grade students from 34 percent in 2007 to 16 percent in 2011, although elementary and high school numbers have not changed significantly.

Despite the progress across the country, most states still do not collect statistics on chronic absence.

“There's no silver bullet,” said Fred Jones, legislative associate for the Alliance for Excellent Education, a nonprofit advocacy organization based in Washington that focuses on at-risk secondary school students. The key, Jones said, is to uncover the reasons behind the absences – whether the student has to care for a sick parent, feels unsafe traveling to school, or has to work to help support the family.  Only then can the school intervene effectively.

Brad Strong, senior director of education policy at Children Now, a nonprofit children's organization in California, said that while school officials often agree that chronic absence is a critical issue, doing something about it is more difficult. School officials must find out whether students need mental health services, better nutrition, safe routes to school or health insurance, then tap the right people to solve those problems.  “If [students] are in school, if districts do this, if schools do this, you're going to see achievement gains across the board,” Strong said.