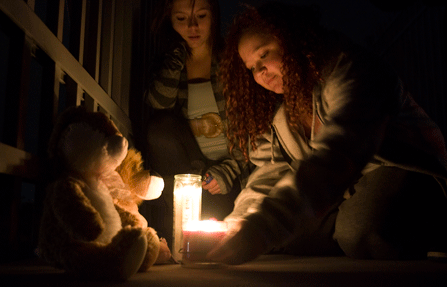 Junior high students in Taylorsville, Utah attend a vigil for a classmate who committed suicide on a pedestrian bridge near their school. Utah lawmakers have passed four bills in recent years aimed at preventing youth suicides. (AP)

After three students took their own lives in one year at his children's middle school, Utah state Rep. Steve Eliason wracked his brain for a response.

“One of the students came to me and said, ‘We know something is happening, but no one is talking about this.' I talked to the principal and said there needed to be more dialogue,” recalled Eliason, a Republican.

The school scheduled a seminar for parents on teen mental health issues, sparking conversations between students and parents. In the next week, two students were diagnosed with severe depression and hospitalized. The seminar idea turned into a model for state legislation and a passion for Eliason.

“It's incumbent on legislators to address suicide, since it's a public health problem,” Eliason said.

A growing number of state lawmakers are putting that view into practice.

Since 2007, Utah and 11 other states have approved versions of the Jason Flatt Act, which requires states to provide suicide awareness training to school employees, including teachers, nurses, counselors, school psychologists and administrators. The law is named for a 16-year-old Tennessee student who took his own life in 1997.

Some state legislatures also are trying to cut down on the rising number of adult suicides by encouraging stiffer gun safety measures and mandating more extensive training for social workers.

Every day, more than 100 people commit suicide in the U.S.  Suicide is the second-leading cause of death for people between the ages of 25 and 34, and the third-leading cause of death among those between 15 and 24. Between 2008 and 2010, there were twice as many suicides as homicides, according to the Suicide Prevention Resource Center. Still, in many areas of the country, suicide-prevention efforts are virtually nonexistent.

“We hear from teachers that they're afraid of hearing that a student is having a hard time and not knowing how to help them,” Flatt said. “But once you empower a teacher to know that they're competent to handle the situation, they are more assured about what to do.”

So far, more than 152,000 school employees nationwide have been exposed to the Jason Foundation's training materials, Flatt said.

In Ohio, Rep. Marlene Anielski sponsored the Jason Flatt Act in honor of her son Joseph, who committed suicide three years ago. Anielski also worked to put locked mailboxes in schools where students can deposit anonymous notes alerting administrators to students who might be at risk.

“Having blinders on and not talking about it does not help anyone,” Anielski said in an interview with the Sun News of Ohio.

At the federal level, the Garrett Lee Smith grant program provides $30 million a year to states and tribes for follow-up care for youth who have attempted suicide or to cover training for teachers, coaches, juvenile justice workers or other people who work closely with teens. More than 600,000 people have been trained through these programs, according to the Suicide Prevention Resource Center.

Reaching suicidal adults is trickier than reaching students in school. Suicide rates among adults ages 35-64 increased 28 percent from 1999 to 2010, according to the Centers for Disease Control and Prevention.

This year, Kentucky and Washington passed legislation that requires training for social workers and counselors to help them recognize suicidal tendencies, which can range from someone talking about wanting to die to displaying extreme mood swings. And earlier this week, Maine Gov. Paul LePage issued an executive order directing state agencies to create a policy on suicide awareness and prevention for state employees.

Other states are focusing on guns. Of the more than 30,000 gun deaths in 2010, the most recent year that data is available, about 61 percent were suicides and 35 percent were homicides, according to the CDC (the rest were the result of accidents, police shootings, or unknown causes). In the U.S., more than half of all suicides are gun suicides.

In Utah, where more than 500 people killed themselves last year, Eliason is working on building support for legislation to require gun-safety education for gun owners applying for concealed carry permits.  He also plans to provide free trigger locks and information pamphlets for doctors to give to their patients. “For instance, if a parent brings their child to a doctor because he or she is depressed, the doctor can say, ‘Here's a trigger lock, go home and put this on your gun,'” Eliason said.  Guns are also the most lethal means of suicide, since there is no time for someone to reconsider their decision to take their own life.

In a study of youth suicides in 2001 and 2002 in Connecticut, Maine, Utah, Wisconsin, Allegheny County, Pa., and San Francisco, researchers from the Suicide Prevention Resource Center found that 82 percent of youths who committed suicide with a firearm used one belonging to a family member. Another recent study from the Harvard Injury Control Research Center found that states with higher rates of gun ownership had higher rates of firearm suicide, but not non-firearm suicide.

The challenge is separating gun safety from the politically fraught issue of gun control, said Catherine Barber, one of the co-authors of the study.

“It's really important to figure out an approach that sidesteps gun control issues, because the audience to reach is gun-owning families,” said Barber. “If they see their family member struggling, that's when we want it to cross a gun owners minds to say, ‘Maybe it would be safer to ask my friend to hold onto my guns, or store them in a locker at the hunting lodge, or even ask the guy at the gun shop to hold onto them for a while.'”

This strategy has been successful in New Hampshire. Under the direction of the New Hampshire Safety Coalition and Harvard researchers, nearly half of all gun store owners in the state have voluntarily displayed educational fliers advising gun owners to keep their firearms locked away from anyone who might be suicidal. Tennessee is also rolling out a gun safety and suicide prevention campaign with gun store owners this year.

Restricting access to guns for suicidal people may well help to reduce suicides, said Dr. Richard McKeon, chief of the suicide prevention branch of the U.S. Substance Abuse and Mental Health Services Administration, but it's not the only thing that can work.

“What's needed is a comprehensive approach to suicide prevention using multiple interventions, not just one,” McKeon said.  That could include restricting weapons access, training or building general awareness, he said.

“It's a multifaceted and complex issue,” Eliason said. “We're doing pretty well at bringing down the number of violent crime deaths, even cancer death, but suicide rates continue to climb. It's not like there's going to be a polio vaccine to fix this.”

Suicide prevention experts urge that if you or someone you know exhibits any of these signs to seek help by calling that national suicide prevention lifeline at 1-800-273-TALK (8255) or visit suicidepreventionlifeline.org.