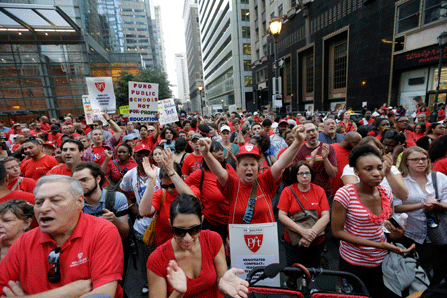 Demonstrators in Philadelphia call for increased funding for public schools. A new study shows that most states are spending less on K-12 education than they did before the recession. (AP)

Although state revenues are slowly recovering from the recession, most states still are spending less per-pupil in K-12 schools than they did before the recession hit in 2008, according to a new study.

The survey by the Center on Budget and Policy Priorities, a left-leaning think tank, found that in the current school year, at least 34 states will spend less per pupil than they did before the recession. In 13 of those states, spending has declined by more than 10 percent.

About a third of states are spending less on K-12 education this year than they did last year. Local school districts cut 324,000 jobs between 2008 and August 2013, according to the report.

In addition to many states' continuing budget challenges, rising student enrollment has helped to depress per-pupil spending: This year there are 775,000 more K-12 students than there were in 2007-08.

State money accounts for about 44 percent of total education spending in the U.S. School districts also have been dealing with reductions in spending from federal and local sources.

The authors of the study, Michael Leachman and Chris Mai, warn that the education cuts could have serious consequences for both students and for the economy.

“At a time when producing workers with high-level technical and analytical skills is increasingly important to a country's prosperity, large cuts in funding for basic education threaten to undermine the nation's economic future.”

Alabama and Oklahoma made the deepest cuts to K-12 education, with each reducing per-pupil funding by more than 20 percent, compared to before the recession. North Dakota, which has benefitted from a boom in oil production, has increased per-pupil spending the most, increasing it by $1,116 since 2008. The next closest state, Iowa, increased per pupil funding by $552.

The study was based on funding distributed to schools through the states' major education funding formulas and does not include local funding, such as property tax revenues.