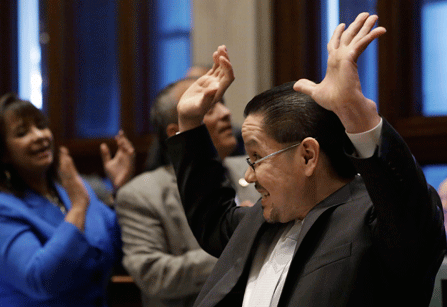 Immigration climbed back onto state legislative agendas this year, following a year in which it attracted relatively little attention from lawmakers, according to a new report.

The number of immigration-related measures signed into law increased 28 percent in the first six months of this year, compared to the same time last year, reported the National Conference of State Legislatures.

This year's activity is still less than it was in 2011, when numerous states followed Arizona in enacting sweeping laws designed to curb illegal immigration.

These days, the measures that end up in the law books are less ambitious, in part because the U.S. Supreme Court struck down several key provisions of the Arizona law, said Ann Morse, director of NCSL's Immigrant Policy Project. “The omnibus bills are gone,” she said. “We're not seeing people revisit that effort.”

In reaction to the high court's ruling last year, lower courts blocked laws with similar provisions in several other states.

Lawmakers held off on many immigration-related measures last year, Morse said, because they were waiting for the Supreme Court to decide the Arizona case.

Since the decision, states have largely passed laws reducing restrictions on immigrants, rather than imposing them.

In addition, many states began issuing licenses to certain young immigrants who qualified for the federal Deferred Action for Childhood Arrivals, or DACA, program.

The Obama administration created the program last summer. Immigrants who qualify—typically students or veterans—receive work authorization and a Social Security cards. Those documents, in turn, allow the immigrants in many states to qualify for driver's licenses.

Licensing measures accounted for nearly a quarter of the immigration policies that passed this year, according to the NCSL report. The category is not just limited to driver's licenses. It also includes professional, hunting and gun licenses.

Three states (Colorado, Minnesota and Oregon) decided this year to allow unauthorized immigrants to qualify for in-state tuition rates at public schools. That brings the number of states with similar polices to 15.

The Democratically-controlled U.S. Senate passed a broad immigration package this summer, but the Republican-held U.S. House has focused its attention on smaller measures.

RELATED
Topics
Immigration Federal Impact
About Stateline
Stateline provides daily reporting and analysis on trends in state policy.
About Stateline
Media Contact
Jeremy Ratner
Director, Communications
202.540.6507
Sign Up
Sign up for our daily update—original reporting on state policy, plus the day's five top reads from around the Web.

The Most Remote Islands in the Atlantic Ocean Need Protection