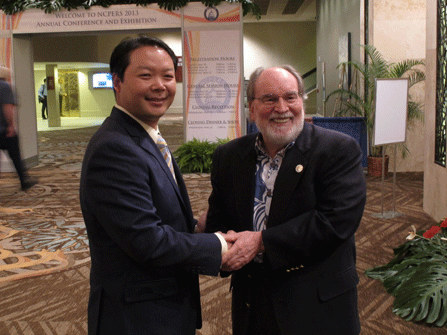 Hawaii Gov. Neil Abercrombie, right, poses with Hank Kim, executive director of the National Conference of Public Employee Retirement Systems, in May during a conference of public pension officials in Honolulu. The governor defended the conference after many officials were criticized for taking the trip at a time when public pension costs are rising. (AP)

Gov. Neil Abercrombie had wanted to host the nation's governors for their annual summer meeting in two years. He found out Wednesday the governors will be going to West Virginia instead. The problem? Hawaii is one of the world's most exotic destinations but also a place where public officials go at their own risk.

Few states depend on one industry to fuel their economy as much as Hawaii relies on tourism. Yet state officials must constantly defend Hawaii as a venue for conferences involving public officials who are vulnerable to criticism back home that they took a taxpayer-financed junket.

“It is patently unfair,” Abercrombie says. “There are 50 states in this country.”

Abercrombie and other chief executives got no flak when they journeyed to Milwaukee in August for the National Governors Association summer meeting. The fun times there included riding Harley Davidson motorcycles, eating and drinking Wisconsin cheese and beer and listening to Republican Gov. Scott Walker sing “If I Could Hold You Tonight” with a cover band. But put a lei around the governors' necks, hand them a Mai Tai, guide them through a hula dance, lead them in a round of “Aloha ‘Oe” and brace for the fallout.

“We're very keen as policymakers to our own constituents saying we took a junket, so we understand this reaction,” said state Rep. Ryan Yamane of Oahu.

Cedric Cook, chairman of the public pension fund in bankrupt Detroit, learned the hard way about traveling to Hawaii. He says he lost his city job last month in part because he and three other Detroit pension trustees spent $22,000 attending a six-day conference of public pension fund officials in May at a Waikiki Beach resort. Detroit's pension systems are underfunded by about $650 million.

The judges of the nine-state Ninth Circuit Court of Appeals  postponed this year's summer conference after GOP members of Congress scolded them last year when they held the $1 million meeting at a posh spa and resort on Maui. “In hindsight, had we foreseen the nation's current fiscal problems, we may have chosen a different site,” chief judge Alex Kozinski told the lawmakers.

Criticism has not stopped California lawmakers from taking trips each year to Hawaii financed by undisclosed interest groups seeking support for legislation. Seventeen senators and representatives went last fall, many accepting up to $2,800 for rooms at the oceanfront Kea Lani resort on Maui.

“Are legislators really going there to sweat the fine points of public policy?” asked American politics professor John J. Pitney, Jr. of Claremont-McKenna (Calif.) College. “It's hard to think that they are saying to themselves, ‘I'm heading to Hawaii so I can get some real work done!' If the point were to focus the lawmakers on serious policy deliberation, these events would occur in places such as Rancho Cucamonga (California), where there aren't quite as many distractions.”

Abercrombie stood up for Hawaii as a meeting destination while speaking to Cook and about 650 members of the National Conference on Public Employee Retirement Systems at the Hilton Hawaiian Village in Honolulu in May. “Hawaii's beautiful scenery and weather may blind some to the fact that we are home to a thriving, sophisticated and contemporary government and business community,” the Democratic governor told the group.

He fearlessly posed for pictures with the group's executive director, Hank Kim, who acknowledged many attendees skipped the Hawaii trip because of “headline risk.”  That's what happened to three board members of the Ohio School Employees Retirement System who canceled their $12,000 Hawaii plans after state lawmakers protested.

Abercrombie, House Speaker Joseph Souki and other political and business leaders said in interviews with Stateline that Hawaii should stand on its own merits as a center of business and commerce just as any other state. They tout its strategic economic importance to the U.S. as the crossroads of the Pacific and point to President Barack Obama's selection of Hawaii as host for the 2011 Asia Pacific Economic Cooperation summit as validation of the state's significance.

“We've done too great a job promoting Hawaii as only a tourist destination,” said Max Sword, a vice president of Outrigger Hotels and Resorts.

Brian Lynx, a vice president of the Hawaii Tourism Authority, said the agency is trying to eliminate the “boondoogle” perception by stressing the state as a place to conduct business as well as have fun. More than half of the business groups hosting meetings there so far this year, he said, are repeat clients, a high percentage in the tourism industry. Tourism is a $14 billion-a-year industry in Hawaii, compared to $10 billion in Wisconsin. Visitors spend an average $214 a day on Oahu.

Conferences involving public officials should not always be held in New York, Los Angeles or Chicago, Abercrombie said. Having the governors in Milwaukee was good, he added, because it exposed them to the strengths of a city they otherwise might not have seen. Hawaii deserves the same recognition, the governor said.

Still, convincing public officials to book a conference in Hawaii will likely face continuing challenges. “It's something we are constantly fighting,” Lynx said.

Detroit emergency manager Kevyn Orr characterized the city pension officials' trip to Hawaii as “a monumental lack of judgment.” There is no danger of the same reaction to next year's conference. Instead of a tropical isle, the pension folks chose a safer venue: San Antonio.