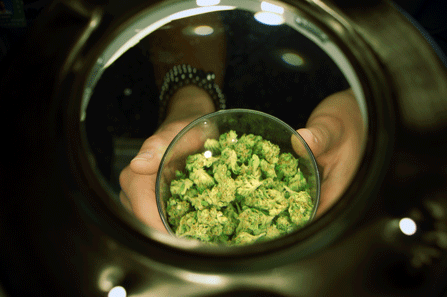 The federal government is taking a hands-off approach to state marijuana legalization schemes, at least for the time being. But as Washington and Colorado begin to create the regulatory framework for legal marijuana, they may require some federal help.

Specifically, under the federal Controlled Substances Act, any bank that takes money from an illegal enterprise can lose its FDIC coverage and potentially be prosecuted. This means that unless Congress amends the law, marijuana businesses must be cash-only, creating a potentially dangerous situation in which they must keep thousands of dollars in cash on hand.

At a Senate hearing on Tuesday, Democratic Sen. Richard Blumenthal of Connecticut asked Deputy U.S. Attorney General James Cole to clarify to U.S. Attorneys how they should treat money from marijuana businesses in states where it is now legal.

The sheriff responsible for Seattle also asked Congress to work with the Department of Justice and the Internal Revenue Service to open up banking to legal marijuana businesses.

For the Justice Department, protecting public safety in a legal marijuana state means prosecutors should aim to stop marijuana sales to minors; prevent gangs from receiving marijuana sales revenue; prevent marijuana from spreading to states where it remains illegal; and enforce a moratorium on growing marijuana on public lands. Those priorities were outlined in a memo from Deputy Attorney General James Cole sent to all 94 U.S. Attorneys last month.

“The Department's guidance…rests on its expectation that states and local governments that have enacted laws authorizing marijuana-related conduct will implement effective regulatory and enforcement systems that will protect federal priorities and the health and safety of every citizen,” Cole said at the hearing.  “A jurisdiction's regulatory scheme must be tough in practice, not just on paper.”

Whether or not states can actually meet those expectations was called into question at Tuesday's hearing. Iowa Republican Sen. Charles Grassley repeatedly mentioned that Iowa's law enforcement officers have seen dramatic increases in Colorado marijuana being sold in Iowa.

Additionally, a recent audit found that Colorado's public health department has not adequately monitored doctors prescribing medical marijuana. The study found that just 12 doctors wrote prescriptions to over 50 percent of the state's 108,000 medical marijuana patients.  Another audit of the state department of revenue's work at regulating marijuana businesses revealed that the state's vision for a “seed-to-sale” tracking system does not yet exist, nearly three years after passage of legislation to create the system.

“Why has the Department of Justice decided to trust Colorado to effectively regulate recreational marijuana when they haven't regulated medical marijuana?” Grassley asked.

Cole said that the department is taking a “trust but verify” approach and reserves to right to sue the state in the future, should the regulations run afoul of the Justice Department's enforcement priorities.

“We've put the governors of Washington and Colorado on notice that they need to have a robust regulatory system,” Cole told the Senate panel. “And we reserve the right to preempt those laws if necessary.”

Colorado Gov. John Hickenlooper's chief legal counsel Jack Finlaw told the committee that the state's medical marijuana regulation had failed largely because of lack of funding. Colorado voters will decide this fall if they want to impose a 15 excise tax and an initial 10 percent sales tax on marijuana sales, which will fund the regulation of the industry.

Despite Grassley's skepticism, Colorado and Washington officials expressed confidence that their systems would be up to the task. "I have no problem with the Justice Department enforcement priorities whatsoever and Washington can meet those," Urquhart said. “Washington's law honors these values by separating consumers from gangs, and diverting the proceeds from the sale of marijuana towards furthering the goals of public safety.”

In total, 21 states and the District of Columbia have relaxed their marijuana laws to allow marijuana use among medical patients, decriminalize the possession of small amounts, or fully legalize it for all adults.