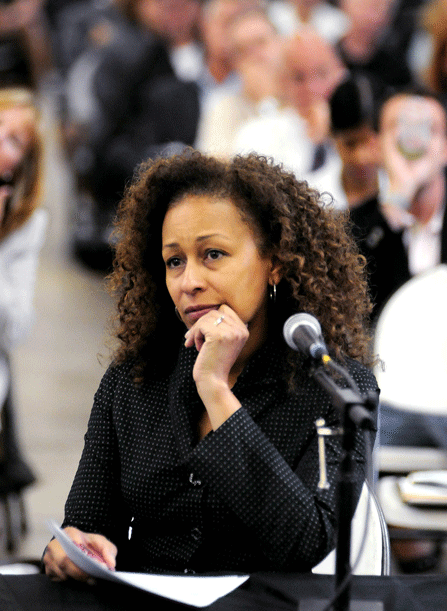 Tamara Tunie, a cast member of "Law & Order: Special Victims Unit," attends a public hearing on tax incentives at a warehouse in Secaucus, N.J. where the television series "Mercy" was filmed. Entertainment industry representatives say the state's 20 percent tax credit has attracted millions of dollars in business and tax revenue to the state. (AP)

While states continue to question whether tax incentives do enough to boost economies and jobs, New Jersey Gov. Chris Christie threw his support behind a bill to consolidate and expand the state's main tax incentive programs.

The state Assembly  Monday approved the minor changes the governor requested on an overwhelming vote. The Senate will consider the bill later this week. Christie praised its main provisions, but asked the legislature to strike a provision requiring businesses that get the tax credits to pay prevailing wages for maintenance workers at their facilities.

"This bipartisan approach will help keep New Jersey's economy growing and on the right track, and I commend lawmakers on both sides for all their hard work," the Republican governor said in a statement.He said the bill will streamline the economic development programs and “boost our economy.”

While New Jersey is set on expanding the tax incentive programs, other states are questioning whether they work as advertised to increase jobs and expand economic growth.

Maine, for example, has set up a task force to find $40 million in savings within the state's tax incentives. Its first meeting is scheduled next week. Without the savings, the state faces cuts to municipal revenue sharing.

“All of our efforts, from our tax code to our policy making, need to be focused on strengthening our economy and growing jobs,” Senate President Justin Alfond, a Democrat, said in a statement. “It makes good sense that the committee take this opportunity to look at what's working and what's not and align our tax incentives to our economy.”

Other states are also taking a look. In North Carolina, for example, a study found that many of the state's tax breaks geared to attracting business were counter-productive, either because they encouraged a business to relocate within the state or because the jobs that were created in the move didn't last.

The state's recent tax reform scrapped many of its tax incentives in favor of a broad lowering of individual, corporate and business taxes, as recommended by the report. The corporate tax went from 6.9 percent to 6 percent in 2014 and then to 5 percent in 2015.

Brent Lane, director of the Carolina Center for Competitive Economics in North Carolina, told a webinar on the subject that a 10-year (1996-2006) state study showed that while tax incentives designed to create jobs, the reality was entirely different.

“The reality is very little of the tax credits were going explicitly for job creation,” he said at the webinar, sponsored by the National Conference of State Legislatures and the Pew Charitable Trusts, Stateline's parent organization. He noted that that 66 percent of the incentives were going for investment, 15 percent for research and development and only 18 percent for job training and new employees. He added that only 14 percent of the total was going to the state's most distressed counties.

Half the companies, regardless of when they got the incentives, had added jobs in the 10-year period (of the study); the other half had shed jobs or not added any, he said.

Another report presented at the webinar found that Minnesota's JOBZ tax incentive program was poorly administered and its results were often not as good as reported.  Done by the Minnesota Office of the Legislative Auditor - Program Evaluation Division the report found that many businesses would have grown or expanded without the tax incentive program.

Also, incentives sometimes subsidized some businesses that compete with other Minnesota businesses for the same customers and employees, the study found. The program was expanded to include almost all Minnesota counties, obviating the goal of directing business to distressed areas.

“The majority (of businesses which got the tax breaks) relocated from elsewhere in the same city or a nearby city,” David Kirchner, analyst at the evaluation office said in presenting the report. “Only 5 percent came from another state.”

Also, most of the businesses were tied to the area – farm implement stores or animal hospitals, for example – and not ones that were likely to go elsewhere without the tax incentives, he said.