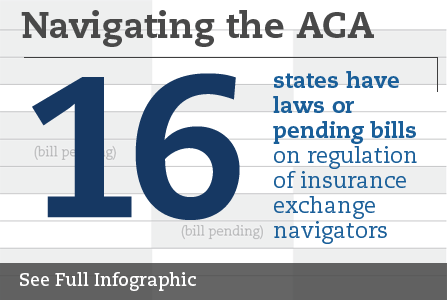 For millions of Americans, the face of health reform will be a friendly, eager-to-please customer service representative on the health insurance exchanges whose title will be “navigator.”

These helper-bees have always been envisioned as an essential cog in the foremost function of Obamacare — educating and enrolling 16 million uninsured Americans either in Medicaid or private insurance plans. They are modeled after similar personnel at the federal State Health Insurance Assistance Program, which has operated in Medicare for more than 20 years.

With the health insurance exchanges set to open for business Oct. 1, thousands of these navigators are now in training. They have also become the latest target in the continuing partisan war over health reform.

Many Republican-leaning states and GOP congressmen are demanding more oversight of these Affordable Care Act workers in the name of protecting wary consumers.

At least 16 states have passed or are considering laws to regulate navigators' work. Many have imposed their own certification and licensing requirements, a process that critics say could hinder the availability of navigators. Georgia's insurance commissioner, for example, has said he will require navigators to pass the same test as insurance brokers, even though federal law makes a clear distinction between navigators and brokers.

Some Republican legislatures have also passed laws that restrict what navigators can do, which some critics believe could conflict with the duties the administration expects the navigators to perform.

Meanwhile, 13 Republican state attorneys general have raised concerns that inadequate training could result in private information ending up in the wrong hands, subjecting consumers to fraud.

And in the latest turn, Republicans on the U.S. House Energy and Commerce Committee are demanding that 51 community-based organizations in 11 states that received $67 million in federal grants to assemble and train navigators submit detailed documentation on training, procedures, monitoring and responsibilities of the navigators. They are also asking for communications between those organizations and federal agencies and groups that promote Obama's health reform.

Rep. Henry Waxman of California, the ranking Democrat on the committee, charged that the purpose of the GOP demand “was not to enlighten the Committee but to intimidate and divert resources from the effort to implement the law.”

Noelle Clemente, a spokesman for the Energy and Commerce Committee, said the questionnaire was aimed at protecting taxpayer dollars and the privacy of consumers.

"This particular program is now $13 million over budget, ballooning 25 percent before it even started,” she said. “Despite repeated concerns voiced by House Republicans about inadequate training, (the Department of Health and Human Services) decided to proceed with the program before even finalizing what that training would be. There is no reason basic questions cannot or should not be answered." 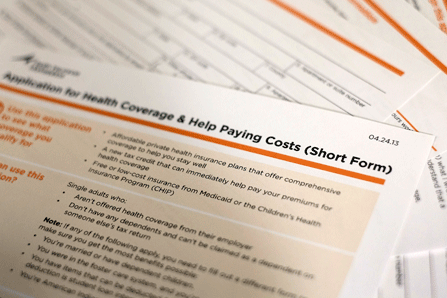 The Obama administration unveiled new application forms for health insurance benefits last April in an attempt to simplify signing up for benefits under the federal health care overhaul. States are weighing in on federally provided “navigators” who will help consumers. (AP)

Beginning Jan. 1, Obamacare will require almost all Americans to have health insurance or face tax penalties. Every state will have its own insurance marketplace where uninsured Americans can compare and purchase private health insurance, choosing from plans that meet federal specifications. These exchanges will also inform people if they qualify for a federal subsidy to pay for their coverage and whether they also qualify for Medicaid benefits and how to sign up for those. Navigators are intended to help with all these functions.

Who runs exchanges in the states will vary. All states were given the opportunity to run their own, but 34 have chosen to let the federal government do so or to partner with the feds. In those states, the federal government is responsible for navigator training (which covers issues of privacy and security of information) and certification.

But the federal law doesn't bar states from passing their own laws on navigators, including those that have set up their own exchanges, as long as they don't interfere with the implementation of the reforms.

Supporters of the health care law suspect that some of these actions are meant to stymie the reforms. “We don't think the laws that are being passed are necessary,” said Christine Barber, a senior policy analyst with Community Catalyst, a nonprofit advocacy organization promoting affordable health care. “The standards have been passed at the federal level. The laws passed at the state level …will slow down the process.”

Proponents of these state measures disagree. To Jason Rapert, a Republican state senator in Arkansas, state licensing is a matter of consumer protection for his constituents. He sponsored legislation requiring state licensure of navigators even though the exchange in his state will be run in partnership with the federal government.

“If we are going to have to endure the Affordable Care Act,” Rapert said, “then we need to make sure that people aren't taken advantage of.”

Some of the state laws are meant to supplement the navigators' federal training with state-specific education. ACA advocates say other state-required training seems to be the same as the federal training.

The new certification and licensure requirements in a number of states, including Georgia, Nevada and Utah, leave little time to get those programs up and running before the Oct. 1 start date. “Absolutely that is a concern,” said Elaine Saly, a health policy analyst with Families USA, which is aligned with the Obama administration.

To some advocates, these laws reflect a misunderstanding of the functions of navigators as laid out in federal law. Unlike agents and brokers, navigators receive no compensation from insurance companies. They are also barred from promoting one insurance plan over another. The navigators are meant to be impartial guides who will help individuals or small businesses find the insurance plan that best fits their needs.

Navigators will be paid with federal funds by the community organizations that employ them. Agents and brokers will be able to sell policies on the insurance exchanges, but they cannot present themselves as navigators. A major source of model state legislation regulating the navigators came from industry associations representing insurance brokers and agents, who are concerned that the navigators will take business away from them.

A few states – Missouri and Ohio are two – have passed laws that restrict navigators from giving advice about plans and benefits.

Supporters fear that these prohibitions might prevent navigators from giving consumers information they need to make their selections. For example, a navigator might ask a consumer if he would like to continue seeing a specific doctor when enrolled in a new plan. If so, the navigator might direct the consumer to a plan that includes that doctor in its provider network. Similarly, if a consumer needs particular brand-name drugs, the navigator could point out which plans cover those drugs. The state laws could consider this information advice or promotion of a certain plan.

“That is pretty gray area,” said Sarah Lueck, senior policy analyst at the Center on Budget and Policy Priorities.

HHS is quietly working with states to make sure their new laws will not impede navigators' work on exchanges. But referring to the House committee's request for documentation of training programs in the states, agency spokesman Erin Shields Britt said, “This is a blatant and shameful attempt to intimidate groups who will be working to inform Americans about their new health insurance options and help them enroll in coverage.” 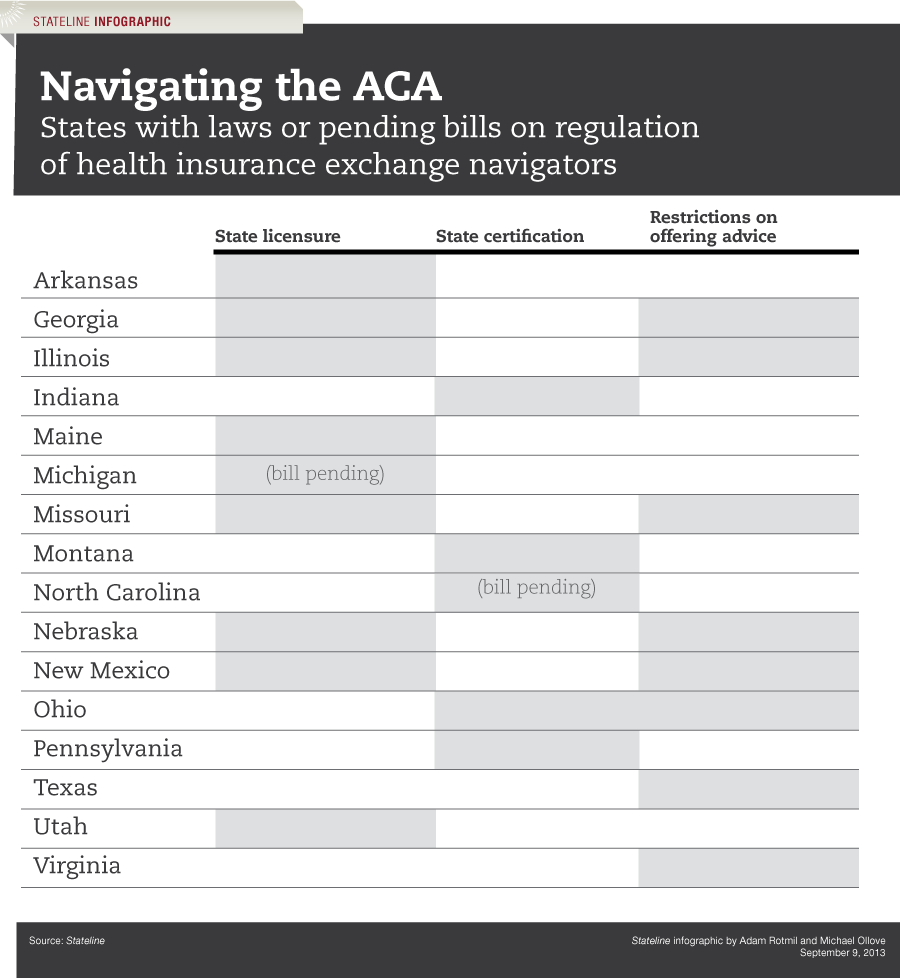