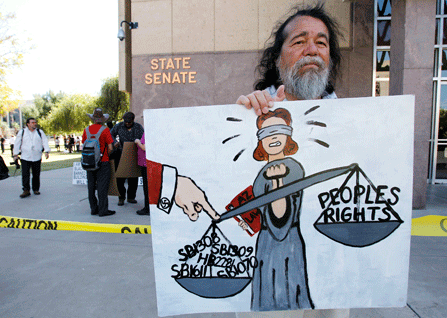 A protester decries state budget cuts outside the Senate building in Phoenix. Even as revenues rebounded, Arizona and other states socked away millions of dollars in rainy day funds rather than restoring spending for education, health care and social services. (AP Photo/Rick Bowmer)

The Great Recession taught states that they should set aside plenty of money for a rainy day. It also gave them a crash course in providing services with fewer people—a lesson they are being forced to put into practice even as the crisis slowly recedes.

The collapse of the national economy led to a collapse in state tax revenues. States' nominal revenues totaled $670 billion in fiscal year 2008. That total plunged to $632 billion in fiscal 2009 and to $604 billion in 2010. To close budget gaps, many states had to shrink their workforces and cut programs and services.

But states that had a substantial amount of money socked away in so-called “rainy day funds” were able to soften the blow. Now states that didn't are trying to learn from their mistakes.

“The (rainy day funds) worked the way they were supposed to,” said Scott Pattison, who heads the National Association of State Budget Officers (NASBO). “It rained, it poured, it stormed.”

He added, “The lesson learned is that ‘Wow, in a downturn you really need those reserves.' We needed what we had in the reserves and much, much more.”

Four states recently increased the amount of money budget writers are allowed to hold in reserve. Georgia, Oklahoma and Virginia all raised their caps from 10 percent to 15 percent of the total state budget, while South Carolina raised its cap from 3 percent to 5 percent.

Hawaii used to require any extra revenues in excess of 5 percent of the total budget be returned to taxpayers as refunds. In the wake of the recession, the state has altered that rule so legislators can opt to put the extra money in the rainy day fund. In Washington state, voters took charge and approved a ballot measure diverting to the rainy day fund any revenue increase that exceeds the state's five-year average by more than a third.

Other states are taking a hard look at how they fill their reserve coffers. Taxes on income and capital gains are most sensitive to broader economic conditions, so they are more volatile than other revenue sources, such as sales taxes. That is especially true of capital gains taxes, which are closely tied to boom and bust cycles in the stock market. In Massachusetts, which is heavily reliant on capital gains taxes, the state now will transfer to its rainy day fund any capital gains revenue in excess of $1 billion.

For its part, Vermont has enacted changes aimed at easing the use of its reserves during the next recession. During the last one, various legal restrictions prevented the state from dipping into any of its multiple reserve pools.

In Connecticut, Indiana, Michigan, Nebraska and New York, there are automatic withdrawals from the rainy day fund when anticipated revenues or other economic indicators fall below specified levels. And in 15 states, there are rules requiring states to replenish the money in a timely fashion.

In addition, at least 27 states require deposits into the reserve fund when revenues exceed a certain measure, according to Todd Haggerty, policy analyst with the National Conference of State Legislatures. North Carolina, for example, requires a transfer of 25 percent of any “unobligated balances” at the end of the fiscal year into the reserve fund. Utah also calls for transfer of a quarter of any “general fund surplus” into the rainy day pool.

Despite those requirements, state officials are finding there are political pitfalls to replenishing reserves, especially following a recession in which they had to make deep cuts in education, transportation and infrastructure.

“Are there competing demands? You bet there are,” said Barry Anderson, deputy director of the National Governors Association. “The cuts were deeper than a lot of governors wanted to make. Now you've got some money coming back, and now the demands are disproportionate to the amount of cuts.”

In California, for example, an unexpected windfall in state tax collections – driven by an improving economy and people selling investments in 2012 to avoid higher taxes – provided the state with a large surplus.

Gov. Jerry Brown estimated the surplus at $1.2 billion while the legislature's number was $4.4 billion. The lawmakers went along with the governor's smaller number, but that didn't stop advocates from clamoring for more spending. The budget signed by Brown put money in the state's rainy day fund, made a substantial payment on the state's debt, and funded some of the Democrats' legislative priorities. It diverted some money from wealthier school districts to poorer ones and included funds for welfare, university tuition assistance, mental health and dental care for poor adults.

The NGA's Anderson suggested that Brown had the credibility to cut that deal because he's been through all of this before—he also served as California governor from 1975 to 1983. “Gov. Brown said ‘We have to save some money for the next recession,'” Anderson said. “I'm sure Gov. Brown and other governors would have liked to have satisfied more of their constituents.”

In North Dakota, Senate Majority Leader Rich Wardner, a Republican, said many people looked at the state's huge upturn in energy revenues and called for spending “more money here, more money there.” The state increased spending on infrastructure, K-12 education and human services, and cut some property taxes. Meanwhile, the state's rainy day fund for general budget emergencies is a healthy $583 million. That is separate from an oil-windfall related “legacy fund” which is expected to swell to $3 billion by year's end.

Like Brown, Wardner has been around long enough—22 years in the legislature—to know that the economy is cyclical. “We've got a lot of money. We have been blessed again and again. But we're not sure how long this will last. We remember what it's like to be on the other side,” he said.

State and local governments shed more than 680,000 jobs since August 2008, according to the Nelson A. Rockefeller Institute of Government. Those jobs aren't coming back anytime soon—if ever. Despite revenue growth over the last three fiscal years, 21 states have enacted fiscal 2013 budgets with lower nominal revenues than in fiscal 2008. (See Stateline chart)

“We are looking at smaller state government for the foreseeable future,” said Don Boyd, senior fellow and co-author of the Rockefeller report.

Some states have learned, from necessity, that by boosting productivity they can provide services with fewer people. Michigan, for example, has cut costs by making some work rules more flexible. Following Gov. Rick Snyder's call for greater efficiency, thousands of Michigan state workers started working from home or from the field late last year, saving on office and infrastructure costs. Departments such as the Michigan State Police, Human Services and Management & Budget tested ways to increase worker productivity and cut costs, such as communal work stations and doing more jobs remotely.

Other states have discovered they can use contractors for projects, such as information technology improvements, that have a specific end point.

When revenues were tight, many states embraced significant labor changes, such as scaled-back health and retirement plans along with pay freezes, salary cuts and furlough days. NASBO said in its post-mortem report on the recession that in many cases these changes wouldn't have been made without the dire fiscal stress caused by the recession. Wisconsin's financial distress, for example, was cited as a key reason for Gov. Scott Walker's move to curtail collective bargaining rights for state workers.

Many of those changes may be here to stay. “Political leaders are not talking about raising the revenue that would be required to restore those cuts,” said Michael Leachman of the Center on Budget and Policy Priorities.

NASBO suggests the hard lessons learned during the recession are likely to benefit states in the long run.

“The lessons learned from the economic downturn cannot only help states in periods of budget instability, but these principles can also encourage long-term realignment for today's limited resource environment,” its report said. 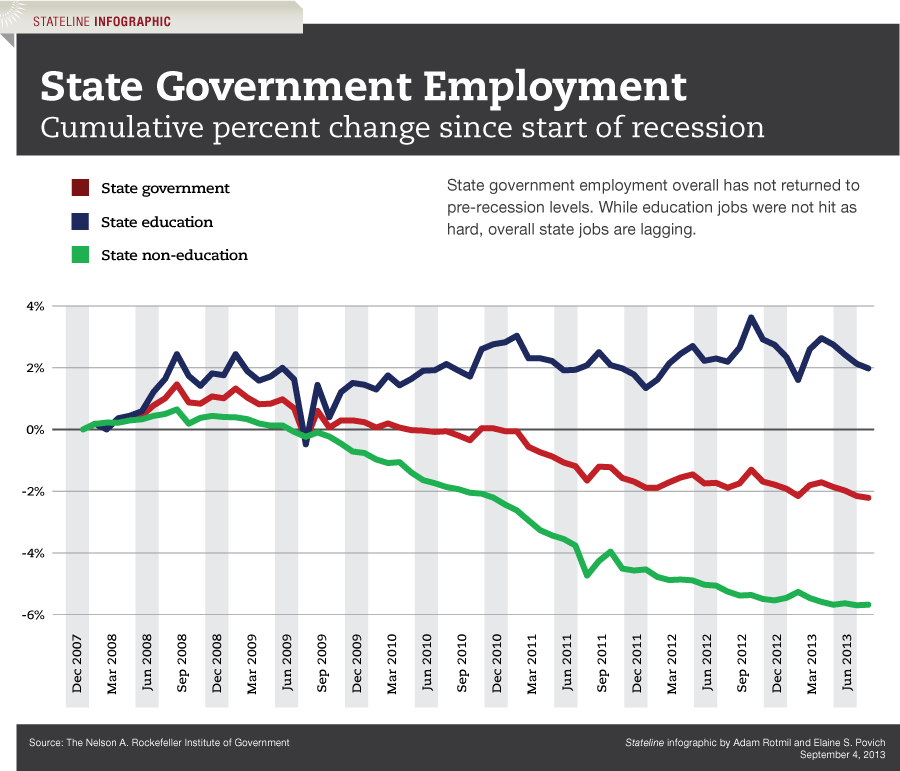