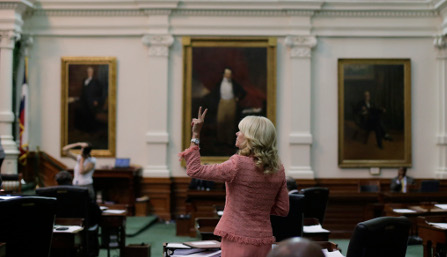 Texas state Sen. Wendy Davis attracted national attention for her 13-hour filibuster of an abortion measure during a special session in June. Several states are having special sessions this year for reasons ranging from sentencing laws to abortion and disaster aid. (AP)

Most state legislatures have adjourned for the year. So when Kansas lawmakers were summoned for a rare September session to address a murder sentencing law, Gov. Sam Brownback threw a barbeque for a little spice-flavored fellowship with them.

“It was an informal, casual affair,” Sara Belfry, a spokesman for the Republican governor, said of the Sept. 3 evening barbeque at the governor's official residence. On the menu: hamburgers, hot dogs, potato salad and lemonade.

Kansas is among several states where lawmakers have been called back to work, months after they already adjourned. Only eight states meet all year-long; most statehouses are shuttered for the year by May, according to Stateline's 2013 Legislative Calendar.

Special sessions tend to conclude with little fanfare, but not this year in Texas. State Sen. Wendy Smith Davis, clad in pink running shoes, was thrust into the national spotlight this summer with her 13-hour filibuster of a measure restricting abortion after 20 weeks. She is now considering a run for the Democratic nomination for governor. The abortion restrictions that Davis tried to stop in the June special session were later upheld in a second special session in July. Texas has had three special sessions this year.

A special session that did not happen likewise generated national headlines. Florida lawmakers and Republican Gov. Rick Scott rejected calls for a special session to reconsider the state's “stand your ground” law.  Various civil rights groups and several Democrats of the GOP-controlled legislature sought the session in the wake of the July verdict finding George Zimmerman not guilty in the shooting death of Trayvon Martin.

Kansas and Oklahoma also reconvened the first week of September because of court decisions, but far less controversial than the Zimmerman verdict. The reasons for special sessions in other states vary from redistricting to bond measures. Contrast that with the years that followed the recession when many states had to convene special sessions to patch holes in their budgets.

Here's a look at some recent special sessions:

Minnesota leaders are discussing a possible special session the week of Sept. 9 that would focus on disaster relief to those affected by recent storms there. Oregon Gov. John Kitzhaber is mulling a Sept. 30 special session to tackle pensions and more funding for schools.