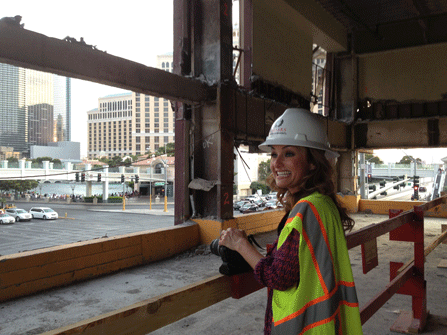 Celebrity chef Giada De Laurentiis at the construction site of her new restaurant in Las Vegas. Construction is one of the weak links in the economic recovery five years after the crash. (PRNewsFoto/Caesars Entertainment Las Vegas)

Five years after the 2008 financial crisis sent the U.S. economy into a tailspin, only a handful of states are charging full steam ahead. Four states' economies are the shakiest and one of them, Delaware, is in danger of slipping back into recession.

For the first time in five years, Moody's Investors Service in August revised its overall outlook at the state level from “negative” to “stable,” due in large part to improving labor and housing markets that have boosted consumer confidence.

In a sign of how precarious and uneven the recovery is, Moody's will later this week lift three states from being at risk of falling into recession to edging into recovery: Alabama, Illinois and Wisconsin. But those recoveries are the weakest in the country,  Steven G. Cochrane, managing director of Moody's Analytics, told Stateline.

Delaware remains at risk because of slow growth in the drivers of its economy, including banking, credit cards, pharmaceutical, chemical and business services, he said.

Delaware, however, has taken issue with Moody's assessment.

“We believe Delaware's future is more promising than Moody's report would indicate,” says state Finance Secretary Tom Cook.  He says employment will pick up this year as Bank of America has promised 500 new jobs over the next three years and Capital One has promised to hire 500 employees there by year's end.

Across the states, Cochrane points to a “clear divide” between the robust recovery of states generally in the West and South, compared to states in the Northeast and Midwest, where growth is slower.

September marks five jittery years since the financial crisis unraveled the U.S. economy. At its peak, it pushed nearly 9 million Americans into the unemployment lines and more than 2 million homes into foreclosure.

States generally have bounced back, with state tax collections growing for 13 straight quarters, according to figures from the Nelson A. Rockefeller Institute of Government. But the recovery is uneven. And factors well beyond state borders play a big role in recovery, including growth of the overall U.S. economy, fiscal problems in Europe and even a military strike in Syria that could create havoc in oil markets.

The U.S. is generating jobs at a pace of roughly 192,000 a month so far this year. At that rate it will take more than seven years to make up for the jobs lost by the recession, according to an analysis from the Brookings Institution. “It's been a very weak recovery, there's no two ways about it,” said Gary Burtless, senior fellow at Brookings.

Nationwide, 11.5 million Americans are still out of work, but that number nearly doubles when factoring in people who want to work but are so discouraged they have stopped looking (988,000) and adding the people who are working part-time because they cannot find full-time jobs (8.2 million).

By using this broader definition from the Bureau of Labor Statistics, Nevada would have a 19 percent unemployment rate, compared to its “official” jobless rate of 9.5 percent. California would see an 18.3 percent unemployment rate, rather than 8.7 percent. And Illinois and Michigan would reach 16.1 percent if the discouraged and part-timers were included, compared to their 9.2 percent and 8.8 percent official rates, respectively (see chart).

Oil-rich North Dakota and Texas cranked out jobs throughout the recession, but the Council of State Governments estimates just 13 states currently have employment at or above pre-recession levels. (The figures do not account for population growth.)

The fracking boom in North Dakota helped boost jobs there by a whopping 23 percent from December 2007 through June 2013, followed by Texas at 6.6 percent.

Texas and North Dakota accounted for only 8 percent of all U.S. jobs in 2009, but between them produced 18 percent of employment growth between 2009 and 2013, according to an analysis by James D. Hamilton, an economics professor at the University of California, San Diego. 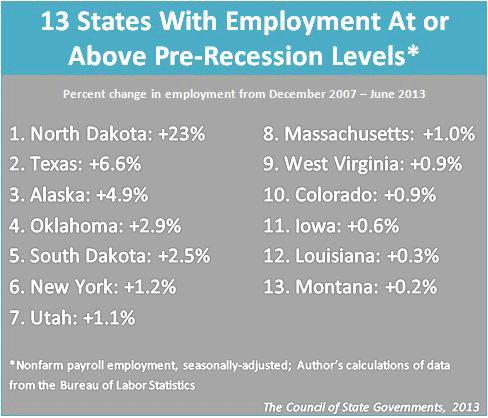 California, once maligned for its never-ending budget deficits and surge of foreclosures, is rebounding in spectacular fashion, leading the country in job creation last month. The state has added more than 800,000 of the 1.37 million jobs it lost during the downturn, according to an analysis from Beacon Economics, a research and consulting firm in Los Angeles.

“It's pretty clear that California is pretty close to the top in terms of overall economic activity,” said Christopher Thornberg, founding partner of Beacon Economics. He credits a rebounding housing market and the state's famed technology sector, the largest in the country.

But the recovery has been painfully slow elsewhere. “Even the worst delays at the airport don't compare to the length of time we have been waiting for Florida's economy to gain altitude,” Sean Snaith, director of the Institute for Economic Competitiveness, recently said.

Florida is outpacing national job growth and its unemployment rate is lower than the U.S. average, but the state ranks first in foreclosures and is second only to Nevada with the most mortgages underwater. Snaith said Florida's economy could take off in 2014 if housing continues to improve.

Nevada is lagging, primarily because of its reliance on gamblers and tourists. While gambling revenue nationwide is above its pre-recession peak, collections are down on the Las Vegas Strip, and the recovery in tourism has been weak, said Ryan T. Kennelly, an analyst with the Center for Business and Economic Research at the University of Nevada in Las Vegas.

And while Phoenix is rebounding, the entire state of Arizona has recovered only 47 percent of the jobs lost during the recession, said Lee McPheters of the W. P. Carey School of Business at Arizona State University.

Construction nearly came to halt in these four states during the worst of the housing crisis. Here, too, the recovery is uneven. Construction jobs in Nevada are still 65 percent below peak construction employment in 2006, the biggest climb for any state, according to an analysis of federal labor data by the Associated General Contractors of America.

Arizona and Florida are both just under 50 percent from peak construction hiring in June 2006 while California is doing better at just 36 percent below its peaks in February 2006.

Most states are still struggling to regain all the jobs lost in construction, which along with manufacturing accounted for nearly one of every two jobs lost during the recession.

Michigan has gained more than 90,000 manufacturing jobs in the last five years, the most of any other state, helped in large part by the federal government's bailout of the auto industry. Michigan is still 70,000 below its 2007 level of manufacturing jobs. Indiana and Ohio also saw increases for the same reason, but are still below pre-recession employment levels.

No state has recovered to pre-recession employment levels in manufacturing through the end of 2012, according to the National Association of Manufacturers.

Even with some turnaround in the sector, changes in technology and automation make it unlikely that manufacturing will regain, let alone surpass, the 2 million jobs lost in the recession.

“We're never going to have the kinds of numbers, in terms of employment, that we saw even 10 or 15 years ago in manufacturing,” said Sujit M. CanagaRetna, a CSG senior fiscal analyst who recently looked at the manufacturing resurgence, particularly in the South.

Housing is important to a state's economy because the sale of every new single‐family home supports more than four jobs, not just in construction and manufacturing, but also financial services and retail as new homeowners splurge on appliances and furnishings.

During the housing bubble, housing was overvalued and many people borrowed money for homes they couldn't afford.  When housing prices fell, home building and home purchases likewise fell. Many people were stuck with mortgages they could no longer pay, forcing a wave of foreclosures.

At the height of the foreclosure crisis in 2010, Nevada led the country with one out of every 76 homes in some stage of foreclosure, including default notices, auctions and bank repossessions, according to RealtyTrac.

Florida leads the country now, with a rate of 1 in every 328 properties in foreclosure. But California, Arizona and Michigan, all hit hard by foreclosures early on, are now out of the top 10 list. Instead, a new wave of foreclosures is hitting different states, largely because their laws require foreclosures to go through the courts.

“Foreclosures are continuing to boil over in a select group of markets where state legislation and court rulings kept a lid on foreclosure activity during the worst of the housing crisis,” said Daren Blomquist, vice president at RealtyTrac.

In the meantime, U.S. companies are sitting on nearly $2 trillion in cash and other liquid assets, waiting for the economy to reach more solid footing before they hire or invest in capital. Once they do, that activity would boost national and state economies.

But businesses continue to hold off in large part because of the uncertainty, not only in the U.S. economies, but in Washington as lawmakers gear up for another round of fighting over the U.S. debt limit and federal spending. 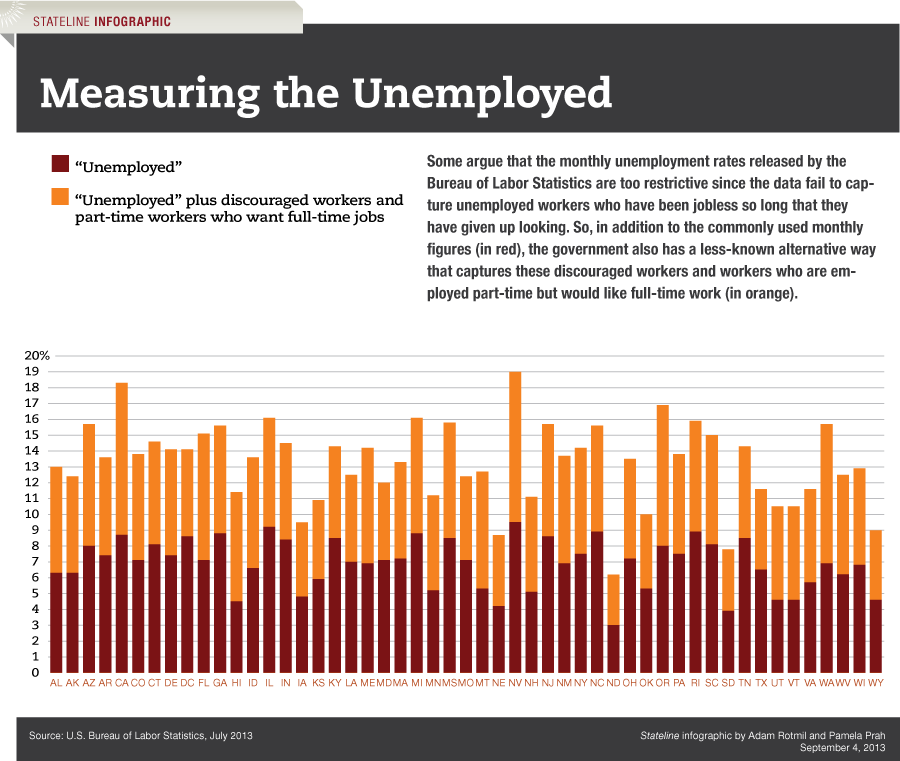