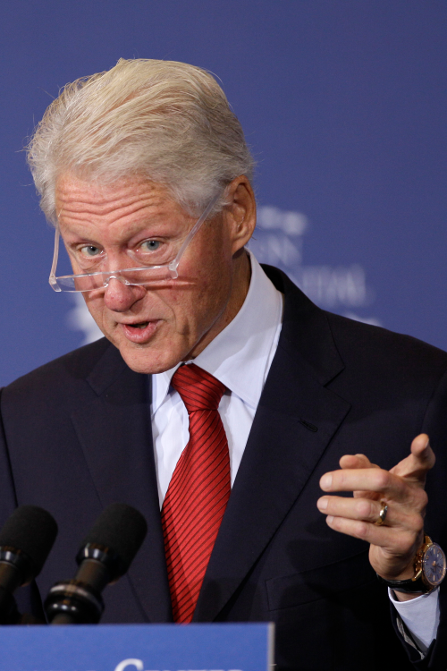 Former President Bill Clinton calls on states to fix a major problem in the Affordable Care Act during a speech at the Clinton Presidential Center Wednesday in Little Rock, Ark. (AP)

Former President Bill Clinton Wednesday championed the new Affordable Care Act, but urged Congress and the states to fix its worst problems. Speaking to an invitation-only audience at his presidential library in Little Rock, Ark., Clinton touted the law's early successes and future benefits, while pointing out glitches he said need to be addressed.

With less than a month before the ACA's health insurance marketplaces open for business across the country, Clinton spoke as part of what the White House has billed as a celebrity outreach effort to help Americans understand what the law has to offer them. At the same time, he pointed out its biggest challenges.

One of the law's worst problems, he said, is an unintended consequence of the Supreme Court's ruling upholding the health law but making the expansion of Medicaid optional for states. As a result, the poorest Americans who live in states that have not expanded Medicaid will not be eligible for any health care assistance. Meanwhile, people in those same states who make higher incomes will get federal tax subsidies to help pay for health insurance.

In about half of the states, governors and lawmakers have chosen not to expand Medicaid to low-income adults with incomes up to 138 percent of the federal poverty level.

In those states, Clinton explained, working people with incomes below the federal poverty level ($11,490 for an individual) will not be eligible for Medicaid or federal subsidies. “So you get the worst of all worlds,” he said.  “You're working 40 hours a week, but you're too poor to get help. Not too rich, but too poor.”

Although most Medicaid expansion states are led by Democrats, Michigan will soon become the third GOP-controlled state after Arizona and North Dakota to accept federal funds to expand Medicaid as the state House gave final approval Tuesday.

Under the ACA, which did not envision an optional Medicaid expansion, federal tax subsidies are extended to people whose incomes are at least a dollar more than the federal poverty level, but no more than four times that level ($45,960 for an individual).

The assumption was that all states would expand Medicaid, so everyone with an income lower than 138 percent of poverty ($15,860) would be covered by Medicaid. People with incomes just above the poverty line and up to 138 percent would have a choice of federal tax subsidies or Medicaid. But in states that do not extend the program to low-income adults, now uninsured people with incomes below the poverty level will get no help.

“This is a problem that only states can fix,” Clinton said. While not offering a specific solution, he said states are “going to have to talk about it.” Besides leaving the poorest Americans without health coverage, he said, states' decisions not to expand Medicaid will hurt the hospitals within their borders that end up caring for the poor.

“It seems to me that the benefits (of the law) can't be fully realized and the problems can't be solved unless supporters and opponents work together to implement it and address the issues that arise whenever you change a system that is this complex,” Clinton said.