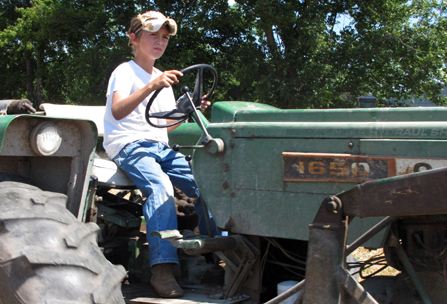 Ten-year-old Jacob Mosbacher drives a tractor through a bean field on his grandparents' property near Fults, Ill. The Obama administration dropped proposals to limit farm work by children as young as Jacob. (AP)

In most states, a girl or boy as young as 12 could work long hours in the broiling summer sun picking the fruits and vegetables for your Labor Day picnic—and it's legal.

Federal child labor laws set a minimum work age of 16 for most occupations, but the laws exempt minors who work in the agriculture and entertainment industries. Unless states pass their own rules, children who are 12 can work seven days a week outside of school hours picking fruits and vegetables. Age, hour, overtime and minimum wage provisions of the federal Fair Labor Standards Act that protect young workers in other fields don't apply.

There are exceptions. Washington allows 12-year-olds to hand-harvest berries, bulbs, cucumbers and spinach when they're not in school. In Hawaii, 10-year-olds can harvest coffee.

The federal government and 10 states set no maximum on the number of hours per day or week a young person can work on farms. Generally, farm workers under 20 receive a lower federal minimum wage of $4.25 an hour for the first 90 days of employment, although hand-harvesters of all ages are often paid by the number of containers filled.

Under federal law, only workers under 16 are prohibited from hazardous tasks on farms while the law protects workers under 18 in non-farm jobs. Teens from 15 to 17 working on farms are four times more likely to die on the job than teenagers in all other jobs, the Bureau of Labor Statistics reports.

“Somehow people have developed this cultural myth that the work ethic has to be developed early and we should put children at risk,” said Mary Miller, child labor specialist in the Washington State Department of Labor and Industry, who has worked in child labor since the early 1990s.

“I'm constantly skunked that there's no constituency for child workers,” she said. “They don't vote.”

Where there are laws to protect child farm workers, enforcement is spotty because of budget cutbacks, labor officials say.

“Interest in child farm labor has really fizzled out on the state level,” said Colleen White, director of Missouri's Division of Labor Standards for 12 years and now a consultant. “All the states are doing more with less.” She said her state used to conduct random inspections to make sure child protection laws were enforced, but now most inspections occur only after complaints of suspected violations.

Meanwhile, a child labor agricultural law signed this year in Missouri makes it legal for children under 16 to work on a farm owned or operated by a relative or, with parental consent, on any other farm. The bill was a reaction to an Obama administration proposal, since withdrawn, that critics said threatened to limit the work children under 16 could do on farms.

“These proposed rules in Washington (D.C.) would limit the types of chores young people could perform on farms, such as prohibiting them from using lawnmowers and power tools, from baling hay, and from performing basic animal husbandry practices,” Democratic Gov. Jay Nixon and Blake Hurst, president of the Missouri Farm Bureau, said in a joint statement.

The Missouri measure was the only farm measure enacted of 25 child labor bills introduced around the country in 2013.

The Obama administration tried in 2011 to update the Fair Labor Standards Act of 1938 and revise the list of hazardous duties children could perform. Farm-state legislators, farmers and ranchers declared war, claiming the new rules would make it illegal for a teen to use a flashlight on a farm.

Under pressure, the administration withdrew the proposed regulations—and also promised they were dead for the duration of Obama's second term.

“I felt like I'd been punched in the gut,” Miller said.

In Congress, Rep. Lucille Roybal-Allard, a California Democrat, recently reintroduced the Children's Act for Responsible Employment (CARE Act), which would prohibit children younger than 14 from working for wages in agriculture. It would also raise to age 18 coverage under the Labor Department's hazardous orders list, which covers 17 dangerous tasks such as operating heavy equipment, climbing a ladder more than 20 feet high and applying hazardous chemicals.

“It would be a great bill. It would go a long way toward protecting the kids,” said Zama Coursen-Neff, director of the Children's Rights Division of Human Rights Watch. It's not given much chance of passage.

But, said Coursen-Neff, “States could right now decide to protect kids in agriculture with these same provisions. There's no excuse to take one class of children, the poorest in the United States, and say you're going to have fewer protections than any other class of children.”

Working conditions for agriculture workers vary by state. For example, only California and Washington state have heat-stress rules requiring rest breaks and access to shade and water for workers of all ages. No such requirement exists on the federal level, Miller wrote last year in the Journal of Agromedicine.

Reid Maki, director of the Child Labor Coalition, part of the National Consumers League, blamed indifference. “For over a decade, we've been trying to spread the word that a 12-year-old can work unlimited hours as long as school is not in session, under harsh conditions in the fields — and nobody seems to care,” he said.

For the farming community, the issues are how to protect a way of life and ensure a reliable workforce. 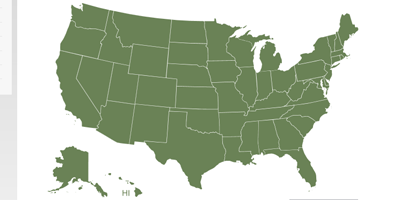 “These are our sons and daughters and our grandchildren. We want them to be safe but we also need a healthy dose of common sense,” said Dale Moore, executive director for public policy for the American Farm Bureau, an advocacy group for farmers and ranchers.

“Standards need to be uniform and based on something other than a feeling,” Moore said.

Barbara Lee, director of the National Children's Center for Rural and Agricultural Health and Safety, works with growers on improving safety and conditions for young workers. The center is funded by the National Institute for Occupational Safety and Health.

It's difficult to know how many children work in the fields. The latest numbers from NIOSH suggest the ranks of hired workers under 20 on farms are shrinking. An estimated 258,835 youth under 20 were hired on farms last year, according to the just-completed 2012 Childhood Agricultural Injury Survey. Of these, about 41,310 were under the age of 16. Further, the survey found that 22,635 youth under 16 worked in livestock operations and 3,314 under 16 worked in fruit and vegetable fields.

Child labor advocates believe the numbers of child and teen farm workers are far higher. “Our closest number estimate is that 400,000 to 500,000 kids are working in the fields,” said Norma Flores Lopez, director of the Children in the Fields Campaign of the Association of Farmworker Opportunity Programs. Many children work “off the books,” she said.

Lester Claravall, director of Oklahoma's Child Labor Unit and the incoming president of the Interstate Labor Standards Association, a group of state labor officials, said the Obama administration's pullback on new regulations makes it more important to focus on the state level.

“We want the kids to work,” Claravall said. “It's the negative consequences we don't want.”

Oklahoma, with no state child labor law for agriculture, lacks the threat of fines, so Claravall uses the carrot of education and outreach, working with school districts, businesses, teens, tribes and farm groups.

Two teenage boys each lost a leg while working in a grain elevator in Kremlin, Okla., in 2011. The tragedy devastated the town and shocked the state, and Claravall was put in charge of the child state's labor effort. He is the sole state employee responsible for child labor protection in all 77 counties.

“We were already doing safety programs, but we realized we had to do more,” he said. Claravall launched a “Speak out for Workplace Safety!” public service announcement video contest for high schools. Winners received iPads and gift cards.

“When you hear about Obama putting everything on hold until 2016,” Claravall said, “you can't sit around and do nothing. You have to do what you can.”

Likely provisions include adult supervision on site, not elsewhere on the farm or in town; no workers under 14; no youth on the overnight shift; only workers with driver's licenses driving or operating equipment; and only authorized workers in the fields. Farmworker parents without daycare options often bring their little ones to the fields. The children can get hurt or start imitating their parents at work and that can result in a labor law violation for the employer, Gasperini said.

“We'd like to be heading toward voluntary practices. That way, when federal legislation is proposed again, we'll have a foundation to work from,” he said.