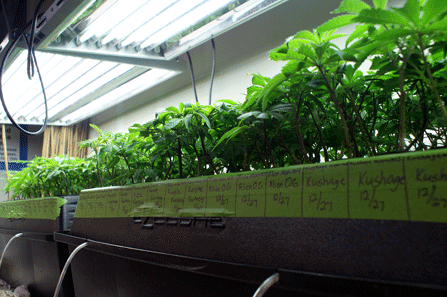 The federal government said Thursday it will not sue Colorado and Washington to stop their efforts to legalize and regulate recreational marijuana.

Rather than squelching the state-regulated legal marijuana schemes, which were approved by voters in the November 2012 elections, the Justice Department will focus on stopping drug sales to minors, preventing drug profits going to gangs and stopping the spread of legal marijuana to other states where it remains illegal.

Attorney General Eric Holder made the announcement in a conference call with the governors of Colorado and Washington on Thursday.

“We recognize how difficult this issue has been for the Department of Justice and we appreciate the thoughtful approach it has taken,” said Colorado Gov. John Hickenlooper in a statement. “Amendment 64 put Colorado in conflict with federal law. Today's announcement shows the federal government is respecting the will of Colorado voters.”

The state is continuing to work on the rules for retail sale and regulation of legal marijuana.

Washington Gov. Jay Inslee welcomed the decision. “We want to thank the attorney general for working with the states on this and for finding a way that allows our initiative to move forward while maintaining a commitment to fighting illegal drugs,” Inslee said in a joint statement with Washington Attorney General Bob Ferguson.

“The news today is an affirmation of good work by the state Liquor Control Board as it has devised a responsible system of implementing our voter-approved law,” Inslee and Ferguson wrote. Washington's Liquor Control Board is expected to have regulations ready for the state's legal marijuana market by Dec. 1.

Holder's decision not to sue Washington and Colorado is in line with his directive earlier this month that U.S. attorneys should stop prosecuting low-level drug users and instead divert them to drug treatment.  It also reflects the reality that the Justice Department would likely be unsuccessful if it tried to stop state marijuana legalization in court, according to a Congressional Research Service report issued earlier this year.

Just how this new enforcement mindset will play out is dependent on the 94 U.S. attorneys spread across the country who make decisions on enforcing the Controlled Substances Act, which classifies marijuana as a schedule one drug, alongside heroin and LSD. In a memo to U.S. attorneys, Deputy Attorney General James Cole advised them not to bring suits against state-regulated marijuana businesses, but instead focus on stopping drugged driving and preventing the growth of marijuana on public lands.

“The Department's guidance…rests on its expectation that states and local governments that have enacted laws authorizing marijuana-related conduct will implement strong and effective regulatory and enforcement systems that will address the threat those state laws could pose to public safety, public health, and other law enforcement interests,” Cole wrote in the memo.

Should the state regulations not work to keep kids and gangs from getting access to marijuana, the U.S. attorneys could still bring charges, Cole wrote.

Colorado and Washington are committed to that not happening. “We are determined to keep marijuana businesses from being fronts for criminal enterprises or other illegal activity,” Hickenlooper said, “and we are committed to preventing the exportation of marijuana out of Colorado while also enhancing efforts to keep state roads safer from impaired drivers.”

The announcement was cheered among marijuana policy activists. “The Department of Justice's decision to allow implementation of the laws in Colorado and Washington is a clear signal that states are free to determine their own policies with respect to marijuana," said Dan Riffle, director of the Marijuana Policy Project.

The Marijuana Policy Project is working on building support for marijuana legalization in Rhode Island, Alaska, Oregon, Maine and California this year.