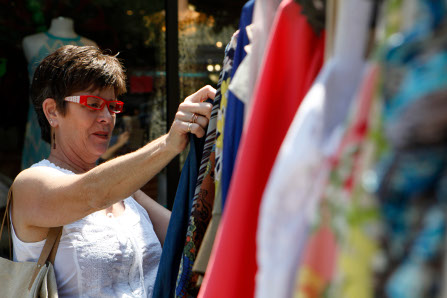 Jani McAllister browses through a sales rack outside a boutique in Atlanta. Georgia's combined state and local sales tax rate is just under 7 percent. All but five states have sales taxes, along with many local governments. (AP)

Tennessee has the highest combined state and local sales tax rate in the country at 9.44 percent and Alaska the lowest at 1.69 percent, according to a new report from the Tax Foundation, a conservative think tank.

The combined sales tax rates were calculated by combining the state sales tax rate with an average of local sales taxes, adjusted for population, the research organization said in its report released Wednesday.

Alaska has no statewide sales tax, along with four other states (Delaware, Montana, New Hampshire and Oregon), but allows its localities to charge sales taxes. High local rates in municipalities like Juneau and Kodiak (5 percent and 6 percent, respectively) give most Alaskans some sales tax to pay.

After Tennessee, the states with the highest average combined rates are Arkansas (9.18 percent), Louisiana (8.89 percent), Washington (8.87 percent) and Oklahoma (8.72 percent).

After Alaska, states with the lowest average combined rates are Hawaii (4.35 percent),

Not counting local sales taxes, California ranks first in state sales tax rates. The state raised sales and income taxes in a November 2012 ballot initiative, bringing the sales tax to 7.5 percent. That rate includes 1 percent the state collects and distributes to localities, according to the Tax Foundation.

Of the states that have sales taxes, Colorado has the lowest at 2.9 percent. Seven states have 4 percent: Alabama, Georgia, Hawaii, Louisiana, New York, South Dakota and Wyoming.

Some states adjusted sales taxes just this year. For example, Virginia increased sales taxes from 5 percent to 5.3 percent, and some Northern Virginia localities charge a 6 percent combined rate. Neighboring Washington, D.C. is scheduled to lower its sales tax from 6 percent to 5.75 percent on Oct. 1, making it lower than Virginia's. “That's never been the case,” said Scott Drenkard, a foundation economist, who authored the study.

As a way to ease the burden on consumers, 18 states scheduled sales tax holidays this year, including Tennessee.

States constantly evaluate their tax rates in comparison to neighboring states, Drenkard said. An example is Vermont, with a 6 percent state sales tax, 16th highest in the nation, and neighboring New Hampshire, with no sales tax. “They (Vermont) worry about leakage all the time,” he said.

“There's a highway that goes through Vermont, near the border with New Hampshire,” he said. “Someone there told me that the highway is on the Vermont side and all the retail is on the New Hampshire side, caused entirely by taxes.”