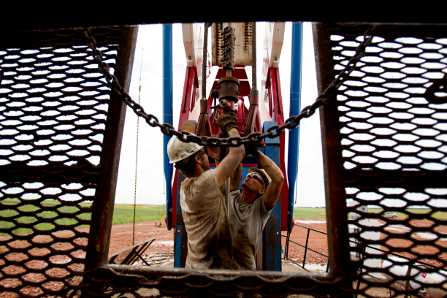 Workers toil on an oil derrick outside of Williston, N.D. West Virginia sent a delegation to North Dakota last week to learn more about its savings account for oil and gas revenues. (AP)

A savings account North Dakota created to preserve a portion of its oil and natural gas tax dollars for the future has exceeded growth estimates in its first two years and could swell to $3 billion by the time state lawmakers decide how to spend it.

State officials predicted the Legacy Fund would accumulate about $600 million by this summer. Through August, officials said, the fund has grown to $1.3 billion. It will continue building revenue until June 2017, when lawmakers are allowed under law to begin tapping the account for such things as education.

“It is growing very fast. It's going to become much bigger,” Republican Gov. Jack Dalrymple told Stateline in an interview. He said the fund added a record $92 million in July.

This type of windfall is unthinkable in most states, which bring in little tax revenue from natural resources. But mineral-rich states like North Dakota can afford to set up special trust accounts tied to generous revenue from energy taxes, often called severance or extraction taxes, or from money they get from oil and gas royalties and leases. In this way, states safeguard a portion of the riches they enjoy today from a resource that will likely run out in the future.

Alaska's $45 billion Permanent Fund is the largest and best known because it supports annual cash dividends to residents — $878 apiece last year. Texas's $14 billion Permanent University Fund is the nation's oldest. Created in 1876, it uses the proceeds from oil and gas production on publicly owned land to finance higher education. New Mexico uses its $11 billion Severance Tax Permanent Fund to pay down interest and principal on bonds it sells. Some of Wyoming's $6 billion Permanent Fund pays in part for scholarships to the state's colleges and universities.

More states are joining the trend. Last fall, Utah voters approved a ballot measure requiring officials to deposit a portion of severance taxes into a trust fund instead of the general fund starting in 2016. West Virginia, with increasing natural gas production, sent a group of lawmakers to North Dakota last week to learn about the Legacy Fund so they can propose a similar account in the coming legislative session. Additional states may take a look at these trust accounts depending on the success of fracking technology, in which natural gas is extracted from shale.

The evolution of North Dakota's fund says as much about the state's Nordic heritage as it does its status as the nation's second-ranked oil-producing state. A third of North Dakota's residents are of Norwegian descent, the highest percentage of any state, and Norway is one of the world's top oil and gas producing countries.

Dalrymple and lawmakers say they patterned the Legacy Fund after Norway's $740 billion sovereign wealth fund, the world's largest. Because the supply of energy is limited and its prices fluctuate with the economy, Norwegian officials conceived their fund to capture revenue today that may be needed in the future. 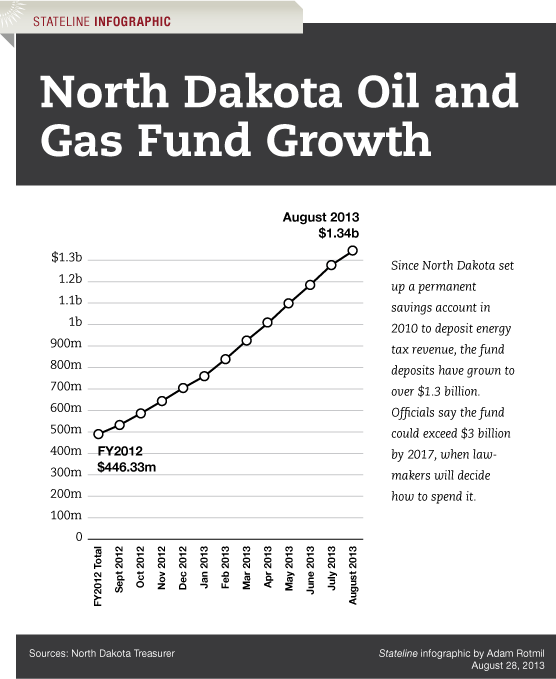 North Dakota lawmakers used the same rationale when they first proposed the Legacy Fund in 2008 as the state's oil production was taking off. The oil bounty helped North Dakota come through the recession better than any other state. It has consistently run huge budget surpluses, and its 3 percent unemployment rate is the nation's lowest.

“I'm a firm believer that when you harvest a one-time, finite resource, you have to put away some of that wealth for future generations,” said North Dakota Sen. Dwight Cook, a Republican from Mandan.

But voters rejected the first attempt to establish a fund. That proposal called for the first $100 million of oil and gas revenue to go into the state's general fund, and anything above that amount would have been deposited into the Legacy Fund. Opponents, led by educators and school advocates, thought that measure gave lawmakers too much money to spend without restrictions. “We probably were a little too greedy,” Cook concedes.

With support from the education community, the measure was approved on the second try in 2010.

Lawmakers agreed to keep 30 percent of yearly oil extraction and production taxes in the Legacy Fund, and restrict spending from the account until after 2017.  Two thirds of both houses must approve any spending of principal, and no more than 15 percent of the principal can be disbursed over a two-year state budget cycle. Interest earned after 2017 is assigned to the general fund.

The $1.3 billion accumulated so far in the Legacy Fund could have been higher if state officials had invested the money more aggressively. Consistent with North Dakota's fiscal conservatism, state officials initially built a portfolio of short-term, fixed-income investments averaging 2 percent a year in returns. Financial consultants advised officials that a return of at least 6.6 percent was needed to preserve the fund's future purchasing power. Based on that, state officials voted in May to allocate half of the Legacy Fund in stocks and the rest in fixed-income and real estate.

Though the first dollars will not be spent for four years and economic conditions could change, lawmakers are beginning to consider how to spend the money. Education is always popular with lawmakers, and House Majority Leader Al Carlson said he likes Wyoming's college scholarship program financed from its permanent fund. It is unlikely, Carlson and others said, that North Dakota, with a much smaller fund than Alaska, would write annual dividend checks to residents. “You have to be very careful about this. It's a one-time resource,” said Carlson, a Republican from Fargo.

The governor noted that Norway, which has “the granddaddy of all endowment funds,” has not determined what to do with its energy bounty. “They've really been accumulating money for 20 years, and they're still trying to decide whether to run the country on the money, to give the money back to people, invest a whole lot of money in infrastructure, eliminate all taxes,” Dalrymple said. “If you have a state endowment fund, how do you manage it? We're not really far along either. We're really just beginning to talk about what we're going to do with it.”