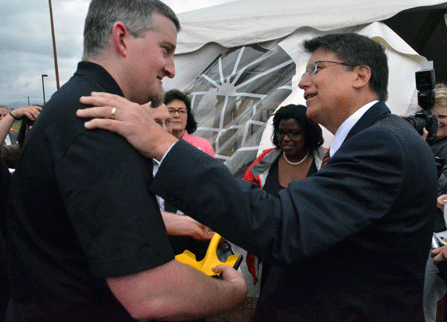 State civil service rules originated a century ago to prevent incoming governors from replacing state workers with their political supporters. Now a handful of governors are working to change those rules, saying they make it difficult to hire and retain the right employees and to fire anyone — even the worst underperformers.

"I've got a $20 billion operation I've got to run, and you can't run it with your managers' and your executives' hands tied,” North Carolina Gov. Pat McCrory said in an interview with Stateline.

McCrory, a Republican who worked for 28 years for Duke Energy, wants public sector employment to be more like employment in the private sector. But some experts say significantly altering the current civil service system may bring back the widespread cronyism of the early 20th century.

Rick Kearney, a professor of public administration at North Carolina State University's School of Public and International Affairs, worries the changes will make public employment a less attractive option for highly skilled workers. “The whole idea was to take politics out of the public bureaucracy and make it merit-based through job protections and objective performance appraisals,” he said. “To be successful, you have to insulate public employees from politics.”

Some Republicans, who are often at odds with public employee unions, also counsel caution. Louisiana Gov. Bobby Jindal is among them. “When you think about the powers you'd like as governor or in any of these elected offices, you always have to imagine: ‘Would you want your political adversaries to have those same powers?' That's a good check on how much power you can trust,” Jindal said.

Jindal said he benefitted greatly from the expertise of his state's civil service employees during his first job in state government, as head of the Department of Health and Hospitals. “I was very grateful for the continuity and the knowledge and the experience of the state civil service employees that I had there,” he said. “If the previous administration had gotten rid of that previous expertise and knowledge, we wouldn't have been able to hit the ground running.”

In Arizona, Republican Gov. Jan Brewer made shifting the state's workforce system to an “at-will” model the centerpiece of her 2012 legislative agenda. Florida, Georgia and Indiana all have “at-will” systems, which give state officials the discretion to hire, reward and fire workers.

“Our state employees were just stuck,” Brewer said. “You could never reward them for performance, so you take that natural instinct away from people because there's no place for them to really move up.”

Now new Arizona employees are now required to accept “uncovered” status, foregoing traditional civil service protections. Managers have the flexibility to reward or discipline such employees as they see fit.

Some current employees were automatically transitioned to “uncovered” status. Others were offered a 5 percent one-time bonus in exchange for voluntarily giving up their “covered” status, and 5,276 of 13,761 eligible employees chose to do so. In total, at least 71 percent of Arizona's state workforce is now uncovered.

Brewer said she isn't worried that future administrations will fire state employees who don't share their political affiliations and sensibilities. “Anybody that's in charge of any kind of people that are working and producing, you don't fire those people, you reward those people,” she said.

In North Carolina, McCrory signed a law last Wednesday that increases the number of positions exempt from civil service requirements from 1,000 to 1,500. Even under traditional civil service rules, governors are allowed to fill a number of high-level positions with political appointees. But as recently as two years ago, North Carolina had only 400 exempt positions.

The McCrory administration has come under fire in local media for appointing two 24-year-old former campaign aides to high-level positions in the Department of Health and Human Services with salaries that top $85,000.

In Tennessee, a key result of months of difficult negotiations with the Tennessee State Employees Association was the elimination of the practice of “bumping.” Bumping allows employees whose positions are being eliminated to force others with less seniority into lower positions, or even out of the workforce altogether. Critics say the practice often pushes employees into positions that are a poor match for their skills, forcing the state to retrain them.

As a result of the changes, salaries and layoffs in Tennessee now are based on performance evaluations, rather than seniority.

Colorado is one of four states with personnel rules that are detailed in the state's constitution, so its personnel overhaul required both legislation and a ballot measure. The system hadn't been changed significantly in 92 years, despite at least four unsuccessful attempts.

Colorado is phasing out its bumping system by restricting it to senior employees who are close to retirement. It also is offering help to workers who are bumped from their jobs. State human resource teams either search for a suitable job for the displaced worker somewhere else in state government, or offer tuition help, severance pay, extended health benefits or placement on a re-employment list.

Democratic Gov. John Hickenlooper drew on his own experience in pushing for the changes, noting that early in his career he was laid off from his job as a geologist. “It turned out I wasn't as good a geologist as I thought, and I was forced to find something else,” he said, referring to his second career as a successful restaurant owner. “When I found that something else, the first day I opened my restaurant, I walked into that place and I was alive.”

“I realize not every story has a happy ending, but in many cases that disruption of your life often leads to good things if you're open to it and you have a little support,” Hickenlooper said.

Colorado also is relying less on tests in hiring state workers. Before a ballot measure was passed last November, the state had to hire applicants based on their scores on written or oral exams, a requirement that forced it to hire skillful test-takers instead of the best overall candidates, according to Kathy Nesbitt, executive director of Colorado's Department of Personnel and Administration.

Eliminating testing requirements has been more controversial in New Jersey. The Civil Service Commission there is considering a “job banding” system that would give managers broad discretion to promote employees within certain groups of positions. Currently, employees must take a test in order to be considered for promotion, and are put on a list of eligible candidates for managers to draw from.

The legislature has passed a resolution aimed at blocking the move, which the Civil Service Commission had proposed as an administrative rule change that would not require legislative approval.

"They are attempting to really gut the system, because this would change it from a system that is based on something very objective to something that could very well be based on patronage,” said state Sen. Linda Greenstein, a Democrat.