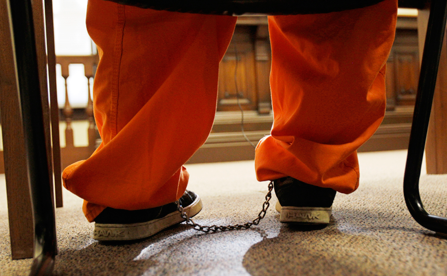 A 10-year-old boy, charged with murdering his mother, sits with leg irons in a courtroom in Millersburg, Ohio. The Supreme Court last year struck down mandatory life without parole sentences for juveniles, prompting varying reactions from states. (AP)

In 1980, Henry Hill was convicted of murdering a man in a Saginaw, Mich., park and sentenced to life in prison without parole, the mandatory sentence for the crime. He was 16 years old and functionally illiterate.

Last year, the U.S. Supreme Court ruled in Miller v. Alabama that mandatory life sentences for offenders under 18 are cruel and unusual punishment, and therefore unconstitutional. In the wake of that decision, a federal court this month ruled that Hill and more than 300 other Michigan juvenile lifers are entitled to a parole hearing.

Michigan is one of at least 11 states that have revisited their sentencing laws in response to the Supreme Court decision (see Stateline chart). Generally, juvenile killers in those states will be eligible for a parole hearing after serving a mandatory minimum sentence of about 25 years.

Still, there are at least 15 states that have not yet eliminated mandatory life without parole sentences for juveniles. In many states, legislatures and courts aren't sure how the Miller decision should apply to offenders such as Hill who are already serving such sentences. Nationwide, there are more than 2,000 prisoners in 43 states serving life without parole sentences for crimes they committed as juveniles.

That confusion reflects the nuance of the Miller v. Alabama decision, which struck down mandatory life without parole sentences for juveniles, but not all life sentences for those offenders, said Doug Berman, a law professor at Ohio State University.

“There's been a dynamic set of reactions, and that reflects that the decision will have different impacts on different jurisdictions,” said Berman. “In some states where it's only a couple sentences, the courts are saying ‘OK, we'll think about resentencing (all prisoners serving juvenile life without parole sentences),' but in other states where they have lots of these sentences, they're more resistant.”

For instance, in Pennsylvania, which has largest number of inmates whose sentences are covered by the Supreme Court ruling, the state Supreme Court has been considering the retroactivity question for over a year. The court's decision could lead to the resentencing and eventual release of over 400 convicted murderers. 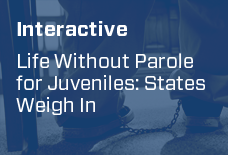 The Supreme Court's Miller v. Alabama decision reflects a broader rethinking of the tougher sentencing practices that proliferated in the late 1980s and 1990s. Earlier this month, U.S. Attorney General Eric Holder announced that the Justice Department would no longer pursue mandatory minimum sentences against many low-level nonviolent drug crime offenders. That thinking is applicable to youth as well, said Jody Kent Lavy, director of the Campaign for the Fair Sentencing of Youth.

The super-predator theory, popular in the early 1990s, predicted a wave of juvenile violent crime in the following decade. States reacted by treating many juvenile offenders as if they were adults. Between 1992 and 1995, 48 states increased penalties for juveniles convicted of violent crime, according to the Department of Justice. But that wave never came: Juvenile crime started to drop in the early 1990s, and it has continued to decline in the years since, as has adult crime.

The harsher juvenile sentencing laws likely were not a factor in the decline, since data show there was no difference in the crime rate for states with mandatory life without parole sentences and those without. Crime has declined nationwide, and across all demographics. “We need to take a second look at these laws—that's what the Supreme Court directed us to do,” Lavy said.

In Miller v. Alabama, Justice Elena Kagan and four other justices ruled that instead of imposing mandatory sentences on juvenile criminals, courts must consider each one individually, taking into account family background, education or history of violence.

For instance, after Hill was arrested in 1980, his psychological evaluation showed he had the mental maturity of a 9-year-old. The court psychologist said Hill was “motivated by instant gratification and desire to be accepted and secure,” according to court documents.  Because of Michigan's mandatory sentencing structure, the court had no discretion to consider any mitigating factors in Hill's case.

The Miller v. Alabama decision and the Michigan federal court ruling that followed it was a wake-up call, said Deborah LaBelle, the lead counsel for the Michigan juvenile lifers. “Miller said you can't ignore the family and community environment where a child grows up,” said LaBelle. “Youth don't have choices about where they live and they can't just get up and leave.”

Considering youth as a mitigating factor is part of the Supreme Court's broader move toward treating kids differently than adults. In two decisions banning the death penalty for juveniles for both homicide and non-homicide crimes, the justices relied heavily on neuroscience showing that brains are still growing and changing well through the teenage years, meaning that juveniles are likely to grow out of their criminal behavior, especially if they're put in a rehabilitative setting.

“Families were told that (the killers) would never be paroled, and that could have been 20 or 30 years ago,” Yearout said. “Now the families are being told that's not true anymore and that's very frightening. It's very important to have truth in sentencing so that victims have assurance that the sentence will actually be what's set.”

Schuette has said he will appeal the Michigan federal court decision.

Most of the 11 states that have changed their laws to comply with Miller v. Alabama have either discouraged the use of life without parole sentences for juveniles, or scrapped them altogether.

Despite the uncertainty, advocates are determined to push the court's logic that kids are different to its fullest extent. “In the end, this decision impacts more than just criminal justice, since it recognizes the linkage between environment and criminality,” said LaBelle.

But Yearout of the Michigan attorney general's office said altering the sentence of any convicted murderer would be devastating for victims' families.

“These new, additional parole hearings would send victims' lives into upheaval, forcing them to re-live the crime that took their loved one away forever,” Yearout said. “That cannot happen.”