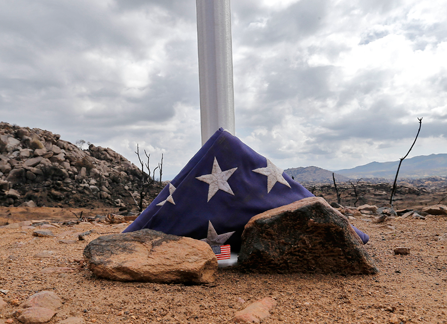 A flag sits at the base of a flagpole at the site near Yarnell, Ariz. where 19 firefighters died battling a wildfire on June 30. Arizona Gov. Jan Brewer, a Republican, said President Obama's rejection of a federal disaster declaration was “misguided.” (AP)

Earlier this summer, a wildfire near Yarnell, Ariz., killed 19 firefighters and destroyed 109 homes at an estimated cost of $6.8 million. When Gov. Jan Brewer asked President Barack Obama to declare a federal disaster, he turned her down.

A few months earlier, a fertilizer plant explosion leveled the town of West, Texas. In that case, Obama did declare a disaster—albeit after an appeal from Texas Gov. Rick Perry. After Hurricane Sandy rocked the eastern U.S. last October, the feds declared landlocked West Virginia and several other states to be disaster areas—but not Florida.

The Federal Emergency Management Agency (FEMA) is supposed to follow specific guidelines when it advises the president on whether to approve federal disaster aid for a state or individuals.

But experts in the field say the disaster standards are unclear—and often ignored. The result is that disaster decisions can seem arbitrary or politically motivated.  FEMA's public explanations typically do not shed much light on its rulings, leaving governors to wonder why they missed out on federal help.

“The damage to uninsured private residences from this event was not of such severity and magnitude as to be beyond the capabilities of the state, affected local governments and voluntary agencies,” Craig Fugate, FEMA administrator, wrote to Brewer in a typical denial.

Between 1991 and 2011, presidents approved more than 85 percent of governors' disaster requests. During that period, the states most likely to be denied disaster declarations were Connecticut (39 percent), Arizona (37 percent), Texas (35 percent) and Rhode Island (33 percent), according to a Stateline analysis of documents obtained under the federal Freedom of Information Act.

Brewer, a Republican who has clashed repeatedly with the Obama administration, called the denial of the Arizona request for the wildfires “misguided.”

“Local residents are under enough emotional stress as they work to pick up the pieces and put their communities back together. Wondering how or if they will recover their losses should be the last of their worries,” she said.

The wildfires were especially devastating for Yarnell, because it is an isolated town with no major services and only a dozen local businesses, the governor noted in her disaster application.

Brewer has not yet decided whether to appeal the decision, Arizona officials said.

Perry won an appeal to Obama earlier this month, after the president initially rejected a disaster declaration for the fertilizer plant explosion in West, which destroyed 142 homes and killed 15 people.

The Republican governor used both formal channels and public appeals to make his case.

“The day of the West memorial service, President Obama stood in front of a grieving community and told them they would not be forgotten,” Perry said after the denial. “We anticipate the president will hold true to his word and help us work with FEMA to ensure much-needed assistance reaches the community of West.”

In its formal appeal, Texas also slightly increased its damage estimate. In its first try, the state pegged total damages at just above $34.5 million. In its appeal, it boosted that to $35.1 million.

“We don't know exactly why the president (or) FEMA changed their mind — whether it was reviewing the facts or input from Congress and the public,” said Perry spokesman Josh Havens. “(But) it was the right thing to do in order to get this community back on its feet and on the road to recovery.”

What is a federal disaster declaration?

A disaster declaration is one of several ways the federal government can step in to help states during crises. States can also ask for declarations for emergencies, to deal with imminent problems, such as an approaching hurricane; an agricultural disaster, to cope with droughts or flooding; emergency relief funds, to repair damaged roads; or fire management assistance, to fight wildfires.

Disasters declarations are for catastrophic situations and, therefore, allow for greater federal help. They are used in situations such as tornadoes, landslides, floods and terrorist attacks.

By one critical measure, the West explosion was a close call for FEMA.

When a governor asks for money for state and local governments, the federal agency does some quick arithmetic to help decide whether a disaster is too big for a state to handle on its own.

It figures a state can afford to pay a certain amount for every resident before needing federal help. This year the number, which is tied to inflation, is $1.37.

For Texas, that means disasters must cost roughly $34.5 million to meet that threshold. The initial estimates of damage in West exceeded that by just $53,946.68.

Congressional auditors say FEMA depends too heavily on the per-capita cost when deciding whether to approve disaster declarations. In a review released last year, the Government Accountability Office said 244 of the 246 of the approved disaster applications it reviewed met or exceeded the threshold.

The auditors said the formula is only a “proxy” indicator of whether a state could handle disaster recovery on its own. They recommended that FEMA use a more comprehensive system to judge states' financial capabilities and disaster preparedness.

“FEMA runs the risk of recommending that the president award federal assistance to jurisdictions that have the capability to respond and recover on their own,” the GAO wrote.

It also pointed out that the Stafford Act, which outlines the disaster declaration process, prohibits FEMA from relying solely on an arithmetic formula.

Even though FEMA's heavy reliance on the formula is well known in emergency management circles, governors still ask for declarations when the damage falls well short of the threshold.

In Texas, Perry asked for a disaster declaration after more than 15 inches of rain fell on the south Texas city of Roma in 2008. Damage assessments pegged the public cost at $1.3 million. That came out to 6 cents per Texan, far below that year's threshold of $1.31.

After Hurricanes Humberto in 2007 and Hermine in 2010, Perry also unsuccessfully petitioned for disaster declarations. The per-person cost for public damages from those storms came out to 32 cents and 63 cents, respectively.

Perry has plenty of company. In Obama's home state of Illinois, Gov. Pat Quinn, a Democrat, pressed for a disaster declaration two years ago for floods along the Mississippi River. The per-capita damages were not even half of that year's threshold.

When it comes to marginal calls, emergency management consultant Lee Helms said it is better for states to handle what they can themselves before turning to the federal government.

Helms, who led the Alabama Emergency Management Agency for eight years, said holding back on close cases builds a state's credibility. That way when FEMA officials get a disaster request, they will know the state is serious.

Politics can also boost or hurt a state's chances of receiving a disaster declaration, Helms said. It is a lesson he said he learned in April 1995 when tornadoes and thunderstorms lashed northern Alabama.

FEMA originally rejected the state's disaster request, but Alabama officials pressed their case. The state congressional delegation successfully urged the FEMA director to view the damage firsthand. Meanwhile, the state took a closer look at its damage report and revised it.

The federal agency reversed its decision, but Helms said the experience taught him the importance of both a thorough initial damage report and strong political support.

“Politics always plays a part in that, if it's a borderline call,” said Helms. “The ultimate decision is made by the president.”