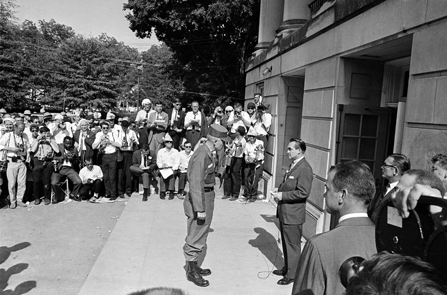 Alabama Gov. George Wallace blocks the entrance of the University of Alabama in 1963 to prevent integration in one of the most dramatic showdowns between the federal government and states in the 20th century. Wallace gave way to the federalized National Guard. (AP)

The Affordable Care Act is the law of the land, but that hasn't stopped a handful of states from doing what they can to gum up its implementation. Take Missouri: The state isn't expanding Medicaid, it isn't opening its own health insurance exchange, and it is barring local and state officials from cooperating in any way with the federal insurance exchange.

Obamacare supporters might be appalled at the refusal of Missouri and a number of other red states to admit defeat and fall into line, but American history is full of examples of state resistance to national authority (see other current examples). Many will remember a certain mid-19th century dust-up when Southern states attempted to excuse themselves from the Union to preserve slavery.

Tension over the relationship between the state and federal governments goes back ever further, to the original meaning of the phrase “the United States of America.”

Before the Revolutionary War was even decided, the Continental Congress in 1777 established their new entity as a cooperative of 13 sovereign states. The national government would have only limited powers, mainly involving diplomacy with foreign countries. It would have a Congress but no chief executive or court system. The states were to be pre-eminent.

The next dozen years convinced the Founding Fathers that the Articles of Confederation needed a rewrite. Avoiding the tyranny of a national government was one thing, but having a federal authority that could not impose taxes, regulate trade, enforce laws, or even compel the states to honor national obligations (such as paying their debts) was unworkable. That led to our Constitution and the founding of a new potent central government. It did not, however, resolve the tensions between the states and the federal government.

Many political scientists believe the 27 states resisting Medicaid expansion under Obamacare eventually will come around, because they will be unable to forgo the federal dollars that come with it. The federal government is going to pay 100 percent of the Medicaid expansion costs in the first three years and 90 percent in later years.

States have turned away federal aid in the past, but nothing of this magnitude. Texas, for example, will miss out on $65 billion in federal Medicaid dollars over a 10-year period, according to the Urban Institute. Florida would wave goodbye to a bit more. Hospitals and business interests in many states have lobbied hard for expansion, noting that the federal money will also create badly needed jobs.

They also point out that taxpayers in the non-expanding states will be paying to implement the ACA, even as 6.4 million of them remain uninsured.

“The fiscal incentive is so overwhelming that it's a testament to the ideological feelings out there that states would leave that kind of money on the floor,” said Paul Posner, professor of public administration at George Mason University.

Even if the logic of not expanding Medicaid eludes some political observers, they agree that the states are within their rights to do so. “I'm no great sympathizer with what the states are doing,” said Andrew Koppelman, author of The Tough Luck Constitution and the Assault on Health Care Reform. “I think turning down this money is nutty, but it isn't on the same level as the Southern states in the civil rights era. They have the right to do it in the same way you have a right to levy high taxes on citizens and throw the money into the sea if that's what you want to do.”

States also have the option of not creating their own state health insurance exchanges, which the ACA contemplated as a place where uninsured individuals, families and small businesses could purchase insurance, usually with a federal subsidy. Under the law, if state officials refuse to create an exchange, the federal government will do it for them. That is exactly what is happening in 27 states, which will have to cede part of their authority over the insurance market to the federal government.

Sometimes states win battles with the federal government. More often, federal muscle and federal dollars are more than the states can overcome. History is replete with examples.

Thomas Jefferson and James Madison, ever skeptical of a despotic national government, floated the idea that states not only had the right but the duty to prevent implementation of federal laws they viewed as wrong. The idea didn't catch hold with other states or the Supreme Court, but it didn't disappear either.

The ardently pro-slavery John C. Calhoun, who served as a senator from South Carolina and vice president under John Quincy Adams, insisted that Southern states declare as null and void federal laws that disadvantaged Southern cotton-growers. Prior to the Civil War, it was Northern states that tried to put nullification into action, passing laws that would undermine pro-slavery fugitive slave laws.

The Supreme Court, however, consistently ruled that states did not have the power to nullify federal law.

Nevertheless, states continued to try to subvert federal law, sometimes quite successfully. After the Civil War, many Southern states effectively nullified the 15th Amendment, which gave suffrage to blacks, by enacting literacy and poll taxes. Some of those measures survived until the 1960s.

Civil Rights Era and Beyond

By then, states rights had again surged to the forefront when Southern states refused to knuckle under to federal authority in the matter of civil rights for African-Americans. In Virginia, state and local officials closed schools rather than integrate. In Alabama, Gov. George Wallace had to be removed from a University of Alabama doorway by federalized National Guardsmen to allow the first black students to enter, as federal law dictated.

For example, in 1965 President Lyndon Johnson and Congress created Medicaid to finance health care for the poor. States weren't required to participate, but if they didn't, they lost out on generous federal matching funds. A year later, only 22 states had come aboard. Gradually, all of the states relented, although it took the last one, Arizona, 17 years to do so.

The states have on occasion found foot-dragging to be a helpful tactic in the face of distasteful federal requirements. In response to the oil crisis in the early seventies, Congress set a national speed limit of 55 mph. Motorists everywhere flagrantly ignored the law, and many states made little effort to enforce it. In 1995, Congress bowed to reality and repealed it.

The 2002 No Child Left Behind law hasn't been popular with many states, either. It requires all public schools to test their students and achieve certain proficiency targets. Poorly performing schools can face a number of remedial actions, including closure. Many states objected to the cost of implementing NCLB, while others complained that it trespassed on state responsibilities. Fourteen years later, more than 30 states have received federal waivers to be excused from the law's full testing requirements.

“What we saw there was a resistance movement emerge, although not as frontally as in Obamacare,” said Posner. “States took the money under No Child Left Behind but in effect they created a rearguard movement of lowering standards and making schools less likely to bear the brunt of regulatory action.”