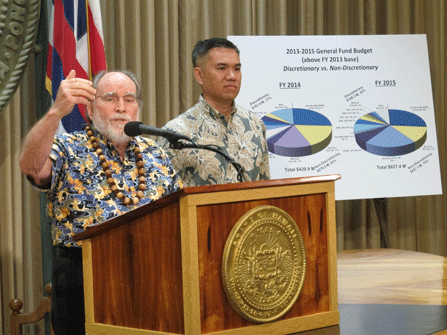 Gov. Neil Abercrombie, left, discusses his budget proposals for the next two fiscal years with budget director Kalbert Young at the state Capitol. The governor predicts another round of sequestration cuts would mean budget holes the state couldn't fill. (AP)

(UPDATED 8/21/2013: Corrects references to $4.2 billion, which is the total domestic spending that will be cut by the sequester; the amount of reductions to the states aren't yet known.)

States have been forced to gear up for a potential second round of across-the-board federal spending cuts after Congress left for its summer recess without a budget deal.

Another round of sequestration would reduce federal spending on everything from Meals on Wheels to Head Start, according to Federal Funds Information for States. FFIS is a Washington group that helps states manage their federal money.

On average, the federal budget accounts for about 30 percent of state revenues, making it the largest single source of money for many states. About 90 percent of the federal dollars come in the form of grants. About three-quarters of those grant programs would be subject to sequestration, according to an FFIS report.

Preliminary estimates by FFIS are that a second round of sequestration cuts would reduce domestic federal spending by $4.2 billion for the 2014 fiscal year starting Oct. 1. Budget analysts are in the process of estimating how much states would lose.

Some of the areas to be cut include: Public housing assistance, money for schools with low-income students, food inspection, scientific research grants, and environmental protection programs.

The total amount of the fiscal year 2014 cuts would be less than the $4.6 billion reduction states experienced in fiscal year 2013. However, this round may be more painful because it comes on top of the earlier cuts. Many states say there's not much left to trim.

Furthermore, because states have already enacted their fiscal year 2014 budgets, a second round of sequestration would force them to make changes on the fly.

“Remember, states already have their fiscal year 2014 budgets in place, so almost anything that happens is likely to upend their spending plans in some way, shape or form,” said Marcia Howard, executive director of FFIS.

Congress went on its summer recess earlier this month with the budget situation unresolved. The House and Senate were unable to pass spending bills that would either conform to across-the-board sequester cuts or at higher numbers set by the 2011 Budget Control Act. The two chambers can't even agree on what the total spending amount for fiscal 2014 should be. The House uses $967 billion while the Senate budget allots $1.058 trillion.

If the impasse is not settled by Oct. 1, the start of the fiscal year, the federal government could shut down, adding to the fiscal bedlam. Without a budget, Congress might have to pass a so-called “continuing resolution,” funding the government at last year's levels, that would allow the sequester cuts to take effect.

Federal government officials acknowledge that states are having a difficult time navigating the uncertain budgetary waters.

“They (states and localities) have a further level of uncertainty,” White House budget director Sylvia Mathews Burwell told a Wall Street Journal breakfast roundtable this month. “Especially because much of their money is in the (federal) grant space.”

Uncertainty “is one of the most damaging things we have right now,” she said.

States in a Bind

Michael Leachman, director of state fiscal research for the progressive Center on Budget and Policy Priorities, said if the sequestration ax falls again, most state legislatures would come back into session early next year facing shortfalls.

“They are already in a difficult spot because they already have imposed major cuts to their schools and other public services,” Leachman said. “If they enter those legislative sessions having to deal with additional cuts in federal funding for schools or law enforcement or clean water or programs that help low-income families, that makes their job even more difficult.”

Pennsylvania budget secretary Charles Zogby said his state managed to get through the first round of sequestration budget cuts without massive cuts in personnel—but that may change. “Thus far, that hasn't been part of the challenge. It may be in round two,” he said.

Pennsylvania and many other states are on a firmer financial footing now than they have been since the recession, but they don't have enough money to compensate for additional federal cuts.

Hawaii, which has a two-year budgeting cycle, set aside a small pot of money in anticipation of possible sequestration in fiscal 2014. Gov. Neil Abercrombie, a Democrat, said the continuing uncertainty is the toughest part.

“I don't want to throw darts or rocks at anybody, I just want to know what the hell the numbers are,” he said at the National Governors Association meeting in Milwaukee earlier this month.

Hawaii officials have set aside $15 million to plug sequester holes. Kalbert Young, the state's budget chief,  said his department is taking applications from state agencies and departments for the extra cash. But they shouldn't count on being made whole, Young said.

“The anticipation is that there will not be enough funds to meet all requests, so the state will have to make a decision on priority as to which programs are going to be supported and at what levels,” he said. “We have already told departments and the public that the expectation is NOT to assume that the state will automatically support programs at their pre-sequestration levels."

The same situation exists in Ohio, according to budget chief Timothy Keen. Keen said his state is anxiously monitoring the situation in Congress, and meeting with agencies to discuss what the impact of sequestration might be.

“We don't contemplate making up with state dollars whatever the federal cuts might be,” he said. “Might there be some cases (where we will add funds), yes. But it's not our policy to backfill with state dollars.”