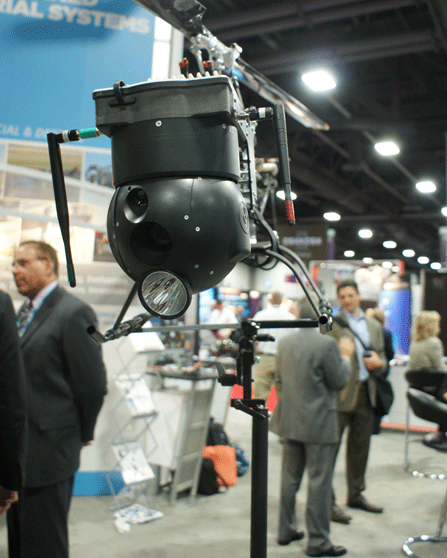 The RAPTR drone helicopter manufactured by Tactical Electronics in Broken Arrow, Okla., is displayed at the Association of Unmanned Vehicle Systems International conference in Washington, D.C. The drone is equipped with heat–sensing cameras, a color video feed and is designed for law enforcement use. (Stateline/Maggie Clark)

In the balancing act over state concerns about drone surveillance and the opportunity for drone-related jobs, economic interests appear to be winning out.

Lured by the possibility of winning one of six Federal Aviation Administration test sites to integrate drones into the national airspace and the aerospace jobs that come with it, at least 16 states presented their credentials to the drone industry and the federal government at the recent Association for Unmanned Aerial Systems International (AUVSI) conference in Washington, D.C.

The jobs created around an FAA test site could be a boon for states—Utah, for instance, estimates a test site would bring at least 23,000 new jobs. Nationally, at least 70,000 jobs will be created in the first three years of drone integration to the national airspace, according to AUVSI.

Tougher privacy laws were seen as a non-starter for states wanting to attract drone jobs and win a test site.

“What kind of message would that send to the selection committee for the FAA site that we wanted to limit drone use and then also wanted the test site?” said North Dakota Republican Sen. Tony Grindberg, explaining how the state legislature defeated a drone privacy bill this year.

At least six states passed laws this year to restrict drone use by law enforcement and set limits on how information collected from a drone, such as photos or videos, can be used.   But more states are doing all they can to appeal to the emerging industry.

Oklahoma's Gov. Mary Fallin has a cabinet-level secretary dedicated to attracting UAV companies to the state. New Mexico has already secured an FAA test site given its long history of military testing. In promotional materials, Utah touts that it is “one of the few states with unified executive and legislative support for UAV testing.”

Even in Virginia, where tea-partiers and civil libertarians worked together to pass a two-year moratorium on drone use by anyone other than the military, the economic temptation of aerospace jobs and an FAA test site convinced the legislature and the governor to all but gut the moratorium in a special session.

“Not only would future job prospects dim, but current businesses and those they employ would be at risk,” warned Peter Bale, chairman of the AUVSI, in a letter to McDonnell. “More than 50 companies that manufacture UAVs have a footprint in Virginia. A moratorium would create an unfriendly environment for these companies, which as a result might look to take their business, as well as jobs, elsewhere.”

In response, Gov. Bob McDonnell added exemptions to the moratorium for researchers and companies to test drones, so long as they are not armed or used for surveillance. Virginia and New Jersey are teaming up to apply for a joint drone test site, competing against 22 other states in vying for one of the spots.

Maine's governor, too, refused to sign a privacy-oriented bill limiting drone use in the state. “This bill will harm any opportunity Maine has to create new jobs in the aerospace industry,” Gov. Paul LePage wrote in his veto message of a bill limiting law enforcement use of drones. “It is the wrong message to send if we want these jobs.” Instead, LePage directed the state Department of Public Safety to create guidelines for law enforcement use of drones.

A model policy from the Aerospace States Association, the Council of State Governments and the National Conference of State Legislatures encourages states to consider requiring a warrant for surveillance of an individual, prohibit the re-use of video or photos collected by a drone for other investigations, and ban weapons from domestic drones.

The FAA will announce the six winners of the test sites in December.