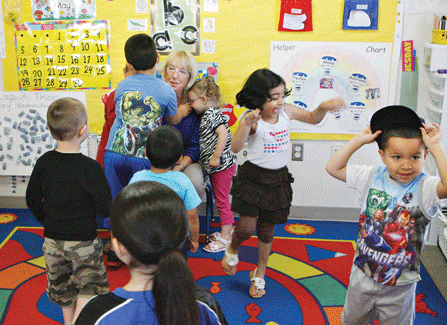 (Updated 8/20/2013: NCSL provided incorrect information about the number of states that appropriate additional funds to supplement Head Start. It is about 20, not at least 30)

Last year about 1 million of the nation's poorest children got a leg up on school through Head Start, the federal program that helps prepare children up to age five for school. This fall, about 57,000 children will be denied a place in Head Start and Early Head Start as fallout from sequestration.

New estimates about the automatic budget cuts were released Monday by the federal government. The cuts have slashed over $400 million from the federal program's $8 billion budget.

Yasmina Vinci, executive director of the National Head Start Association, said sequestration represented the largest hit to Head Start funding in terms of dollars since the program began in 1965.

“The cut has been very painful throughout the country,” Vinci said. Nationwide, about 1,600 grantees, which include nonprofits and local government agencies, receive federal Head Start funding.

The Obama administration had previously estimated that slots for up to 70,000 children would be eliminated as a result of the sequester. According to the latest figures, slots for 51,000 preschoolers were eliminated along with child care slots for 6,000 babies. Children will lose 1.3 million days of service at Head Start centers and more than 18,000 employees will be laid off or see their pay reduced.

The $8 billion Head Start budget is equivalent to how much Americans spent on Halloween last year.

Head Start directors across the country have struggled to pare costs in ways that would minimize the impact on children. Rather than reducing the number of children served, for example, administrators have downsized staff, ordered furloughs, trimmed pensions, shortened school years, ended summer programs and held fundraisers, among other steps.

The Palm Beach Board of County Commissioners voted to eliminate bus service for about 2,300 children in Head Start to avoid cutting slots. In Colorado Springs, the Community Partnership for Childhood Development sold enough chairs representing empty Head Start seats at $500 apiece to re-open a class of 16 students.

In many cases, though, there was no way to avoid shrinking enrollment. In Indiana, at least two Head Start programs used lotteries to decide which preschoolers had to stop attending in March.

“I think it's going to be devastating for families who were hoping that for a year or two before their children got into kindergarten that they would be able to participate in preschool,” said Cheryl Miller, executive director of the Indiana Head Start Association. “These are families that are struggling already. They're not going to be able to pay the cost of some other type of preschool program in their community.”

“For all of us, as a nation, this should be heartbreaking,” Miller said.

The sequestration cuts have also hurt Head Start families, whose incomes must fall below the federal poverty line, or $23,550 for a family of four in 2013, by further eating away at the safety net for the poor. Head Start families who rely on Section 8 to help pay for housing or Special Supplemental Nutrition Program for Women, Infants, and Children, also known as WIC, for example, can be affected in more than one way by sequestration.

Supporters of Head Start say research shows it offers substantial long-term benefits in educational attainment, earnings and crime reduction, for example, while critics argue the benefits of Head Start are insignificant, or that they quickly fade. The Heritage Foundation calls it a failed experiment: "In the interest of children and taxpayers, it's time for this nearly half-century experiment to come to an end."

States with the highest number of children cut from Head Start

Source:Department of Health and Human Services

The cuts come at a time when President Obama and many states – often with bipartisan support – have declared early childhood learning a priority. Obama is pushing a proposal to provide high-quality preschool to all low- and moderate-income 4-year-olds and many states have increased funding for prekindergarten and other early childhood initiatives.

About 20 states appropriate state funds to supplement Head Start, according to Phuonglan Nguyen, policy specialist at the National Conference of State Legislatures. It is unclear how many of the states have approved supplemental funding as a direct response to the federal sequestration cuts.

The California legislature voted in June to increase funding for childcare and early childhood education by $100 million while Ohio will boost early childhood spending by $30 million this fiscal year.

In Chicago, a loss of roughly $6.5 million in federal Head Start funding threatened up to 1,000 slots for Head Start and Early Head Start, which serves children under age three and their families. Mayor Rahm Emanuel ordered the city's Department of Family and Support Services to absorb the cuts by reducing administrative overhead.

Because Head Start programs begin their fiscal years in different months, some felt the impact of the sequestration immediately while others had more time to absorb the cuts.

The Ohio Head Start Association estimates about 2,100 slots for children and babies in Ohio will be cut in fiscal year 2013 because of sequestration, according to executive director Barb Haxton. She estimates the budget cuts have resulted in a loss of 307 staff jobs across the state and prompted programs to cut an average of two weeks per program.

As executive director of Knox County Head Start in Ohio, Peg Tazewell opted to increase class sizes from 16 or 17 students to about 20 rather than reduce the number of spots for children. In addition, she eliminated six positions, including three layoffs, and reduced transportation for students, which means parents will have to drive their children up to six miles to a bus stop rather than have their children picked up and dropped off at their house. Some of the children will now have to ride the bus as far as 20 miles.

Parents of the children at Tazewell's center typically work low-wage jobs with irregular hours in nursing homes, fast food restaurants and construction, Tazewell said. She worries some parents won't be able to make the trip to drop off and pick up their child at a bus stop twice a day when the school year starts in September.

“I think what people should be aware of is that this is a cumulative impact to families,” Tazewell said. The average income for a family of four in her program last year was about $13,000 a year, she said. “Think about what that means as the price of gas goes up, if parents are having to drive 12 miles a day, they tend to have cars with high mileage, their food stamps are being cut. It's like a thousand cuts.”

Minnesota will have about 760 fewer slots for children and babies in Head Start, according to Gayle Kelly, executive director of the Minnesota Head Start Association.

Earlier this year, Rachell Ruiz, 40, of Colorado Springs, feared that her youngest child, a 2-year-old girl, would not be able to get into Head Start after the local program, Community Partnership for Child Development, announced there would be fewer spots as a result of the budget cuts.

Ruiz, who is herself a graduate of Head Start, wanted her daughter to be in the program because of the experience of her older daughter, who is now four. Before Ruiz lost her job as an office manager for a roofing company in March 2012, her older daughter spent her days with Ruiz's mother and rarely had the chance to socialize with other children. There are few children in their neighborhood in Pikes Peak Park, where people from other parts of town are afraid to go “because they think they'll get shot in a drive-by,” Ruiz said.

Now, after a year in Head Start, her daughter is much more social and has learned how to write her name and count to 20.

“Low-income people like me need that place,” Ruiz said of Head Start. “You don't have money to go pay for play dates. You don't have the money to go and pay for them to be in a gym or places like that.” Ruiz eventually learned that both girls would have spots in the coming school year.