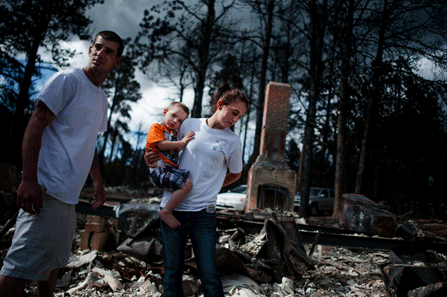 Ritchie Lewis, Brandy Burton and their son Caiyleb Lewis, 2, help sift through the rubble of their family's home that was completely destroyed in the Black Forest Fire, the most costly blaze in Colorado history. As development in the rural West grows, so too have wildfire threats.(AP)

Will wildfires grow ever bigger, more frequent — and deadlier? Those who live in the rugged West are enduring another summer of scorched-earth devastation.

Colorado this year saw the most devastating wildfire in its history, a blaze that killed two people and destroyed 16,000 acres and more than 500 buildings. Arizona is still mourning the deaths of 19 elite firefighters who died in the worst wildfire tragedy the state has ever seen. Californians have fought 43 percent more fires this year than the past four years.

Western state lawmakers have called on the federal government for more help and criticized its management of public lands, where large fires often start and then spread to private and state lands. That's no small issue in a region dominated by federally owned lands, which cover about 70 percent of Arizona and virtually all of Nevada, for example. The U.S. Forest Service labels about 65 million acres of its land “high or very high risk of catastrophic wildfires.”

At the same time, these lawmakers are pondering how to use their own scarce resources. While some conditions, including hotter, drier weather, are beyond their control, states and localities can dictate where people live.

Whether craving rugged terrain or a semblance of solitude, westerners are increasingly settling in communities abutting wilderness that make up what's called the wildland urban interface, or WUI. The population shift has brought in new fire threats and put more people and property in harm's way, while also making firefighting more complicated and expensive.

Fire-prone Texas, Utah, Colorado, Washington and Arizona each rank among the top fast-growing states since 2010, with much of the new population settling in the WUI.

The trend isn't new, but it's snowballing. In the 1990s, some 61 percent of newly built homes in Washington, Oregon and California were considered inside the WUI, according to a study published in the International Journal of Wildland Fires. By 2000, about 42 percent of all homes in those three states fell within such regions. Researchers at Colorado State University expect Colorado's WUI to explode to more than 2.1 million acres by 2030 — triple its 2000 size.

“With the housing market picking up again,” said Ray Rasker, a wildfire expert at Headwaters Economics, a nonpartisan Montana-based think tank, “we're going to see more people building in the fire zones, and the U.S. taxpayers are going to pay for it.”

A major problem Rasker sees is the disconnect between federal and local authorities that few lawmakers appear willing to address. Although state and local leaders play a huge role in fire policy by setting laws on zoning, building construction and property maintenance, it's often the federal government's job to step in to fight the fires or later dole out disaster aid.

“There just aren't financial repercussions for building in dangerous zones,” Rasker said. “You solve that problem and the others will fall into place.”

Some experts suggest that federal and state lawmakers examine broad policy changes that would slow the population shift into the WUI, or at least make its inhabitants more responsible for their decisions.

In fact, that idea surfaced as long as seven years ago in a federal report. “Mandatory zoning and building regulations may be needed to compel landowners to take the actions necessary to protect their homes and property from wildfire,” the U.S. Department of Agriculture's inspector general wrote.

“If state and local agencies became more financially responsible for WUI protection,” the report continued, “it would likely encourage these agencies to more actively implement land use regulations that minimize the risk to people and structures from wildfire.”

Thousands of communities have enacted strong fire-proofing measures, but many more go without protection, or shelve existing plans for lack of money or political will. The same often holds true within WUI communities; while one homeowner might spend thousands of dollars on a fire-resistant roof and property maintenance — clearing fire-fueling dried brush and branches, for instance — a neighbor may neglect nearby property.

“If the WUI residents aren't going to protect their own lives, why are they expecting others to?” said Lloyd Burton, an environmental policy professor at the University of Colorado in Denver.

Some states have taken steps to make these areas safer. California, where about 40 percent of all housing nestles in wilderness, is clearly a leader in this effort, said Burton, who in July published a white paper on state wildfire policy. The state uses its building code and other laws to require more fire-safe housing in the WUI and buffer zones free of flammable shrubs or debris. In 2011, the state also began charging rural dwellers a protection fee of $150 that has netted some $84 million for its strained firefighting budget.

Oregon is another state that requires debris-free WUI property, threatening land owners with fines for violations.

But for the most part, states tend to recommend fire-safe actions, rather than require them. That's the case in Colorado, but it could soon change. Two task forces are discussing protection fees, new insurance regulations, building codes changes and brush-clearing requirements.

Burton of the University of Colorado doesn't mince words when he talks about responsibility in the WUI. When wildfires threaten homes but not lives, he says a firefighting crew's best option is simple: “Just let it burn.”

Many other experts agree. Wildland crews are equipped for work on wide-open swaths of federal land, stopping fires before they reach population centers. Unlike municipal firefighters, they aren't generally trained to put out burning structures. But as more people move into the WUI, the responsibility of these wildland firefighters has blurred.

The 19 Granite Mountain Hotshots, highly trained firefighters who died in the Yarnell Hill fire in Arizona, for instance, were trapped while battling a fire between two suburbs, trying to protect property — a “tragic waste,” Burton said.

In the 1990s, the federal government spent about $1 billion on firefighting and prevention, according to a recent Headwaters Economics analysis. Since 2002, the tab has soared to close to $3 billion each year. In a 2007 survey, some Forest Service managers estimated protecting private property amounted to 50 percent to 95 percent of firefighting costs.

Even so, most WUI in the 11 Western states remains undeveloped. Only 16 percent of those areas have been built on, according to a Headwaters Economics report released in June. Washington has developed 29 percent of its WUI, the most of the states. Wyoming, at 5 percent, had developed the least.

The group called the vast amount of untouched land alarming, saying it means the already dangerous trend has so much potential to grow. 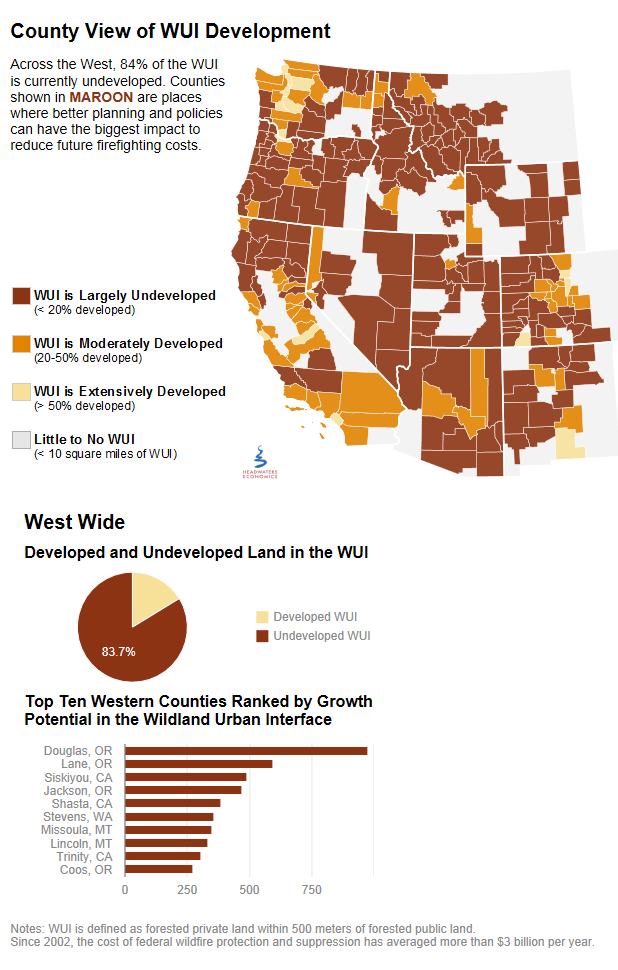