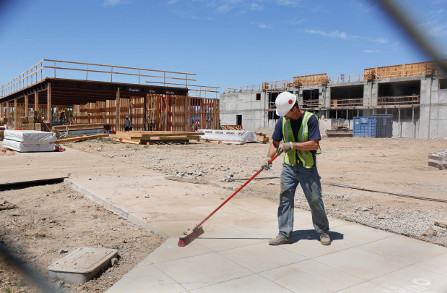 California once again led the nation in job creation in July, but in a paradox, the state also saw its unemployment rate tick up slightly after nearly two years of monthly declines.

California gained 38,000 jobs in the last month, the most of any state, followed by Georgia, which added 30,900, and Florida, which posted an additional 27,600 jobs, the Bureau of Labor Statistics reported Monday.

Nevada's jobless rate inched down to 9.5 percent from 9.6 percent in June, but that rate is still the highest in the country, BLS data show.  Illinois again ranked second with a 9.2 percent rate, above the national average of 7.4 percent.

North Dakota continued to have the lowest jobless rate, 3.0 percent.

California has been steadily gaining jobs so it was somewhat of a surprise that the state's unemployment rate went up two-tenths of a percentage point, to 8.7 percent from 8.5 percent in June.

The slight increase could be a statistical anomaly. The government derives its estimates from a survey of around 60,000 households nationwide, which make the figures subject to month-to-month volatility. Factors such as summer seasonal employment and recent June graduates seeking jobs could have affected the overall number for July.

Otherwise, California appears to be heading in the right direction. The state has added more than 800,000 of the 1.37 million jobs lost during the downturn, inching closer to the state's pre-recession peak, according to an analysis from Beacon Economics, a research and consulting firm in Los Angeles.

All but three categories of jobs actually gained in California last month, according to state figures. Construction posted the largest decrease over the month, down 7,300. Government followed with a decline of 3,900 jobs.

In Nevada, Gov. Brian Sandoval said the latest numbers “point toward stable and modest growth.”  Jobs are up more than 22,000 during the first seven months of this year, the governor said. “The underlying trends remain positive.”

Eight other states and the District of Columbia, with its 8.6 percent jobless rate, had unemployment rates higher than the national average: North Carolina and Rhode Island (both 8.9 percent), Georgia and Michigan (both 8.8 percent), New Jersey (8.6 percent), Kentucky and Tennessee (both 8.5 percent) and Indiana (8.4 percent).

BLS said 17 states had jobless rates significantly lower than the U.S. figure of 7.4 percent and 22 states had rates that were not appreciably different from that of the nation.