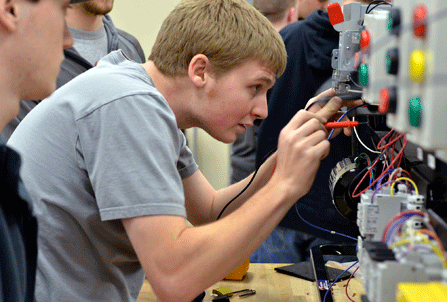 States struggling to rebuild their workforces in the wake of staggering unemployment say they know better than the federal government how to make the most out of limited workforce development and job training dollars.

Governors want more administrative control over programs funded through the Workforce Investment Act, now before Congress for an overhaul. As that discussion continues, the National Governors Association has a wish list.

“We know the federal dollars have been cut, but what's even worse is the fact that we have less flexibility,” Iowa Gov. Terry Branstad, Republican vice chair of NGA's Education and Workforce Committee, said earlier this month. “We're saying that we as governors and our directors of workforce development are much more in tune with what the labor force in our state needs than the people in Washington, D.C.”

In particular, the governors are pushing for restoration of a 15 percent “set-aside” of Workforce Investment Act funds that they used to explore new approaches tailored to their states' workforce needs. In 2011, the federal government cut that to 5 percent. Even with the reduction, states received a total of $120 million in set-aside funds in 2013, so the amount of money at stake is significant.

“With the loss of those funds, we are seeing an elimination of services and a full halt to innovation,” said Joan Wodiska, director of NGA's Education and Workforce Committee. “States are really behind the eight ball at a critical time when we need to be focused on continued economic recovery and job growth.”

Wodiska called the reinstatement of those dollars “a top priority for governors.” She said the 2011 reduction was part of a philosophical shift—cutting across different sectors of federal funding—that moved away from giving large pots of money directly to states without proscribing specific activities.

“They've decided where to spend the money, and they've really broken the trust that we had,” said Connecticut Gov. Dannel Malloy, a Democrat who chairs  committee. “We're trying to restore that trust.”

Wodiska said without sufficient set-aside money, states now are forced to compete with local governments for more of the Workforce Investment Act funds. This process can be expensive and makes it difficult for states and localities to work together, she said.

“You went from just being able to innovate to now sitting across the table from locals competing to create jobs,” she said. “It has really created a difficult position.”

An NGA issue brief provides examples of some of the ways states have used their set-aside funding in recent years:

The set-aside issue is a small piece of a much larger discussion taking place in Congress: How the nation's sprawling workforce development system should work.

A 2011 U.S. Government Accountability Office report found the U.S. spent $18 billion in 2009 to administer 47 jobs programs with overlapping missions and poor tracking of outcomes and effectiveness.

Congress is considering an update or overhaul of the Workforce Investment Act, originally passed in 1998 and scheduled to be reauthorized a decade ago. Instead, programs have continued through annual appropriations.

Over the years, Congress has failed many times to revamp the system, but some observers are hopeful that a deal is within reach this time. The Senate version, passed out of committee July 31, makes less dramatic changes to the current system than the House version, which passed the full chamber in March.

The NGA has not endorsed either version, though the Republican governors of Florida, Michigan, New Jersey, Pennsylvania, Utah and Virginia have individually endorsed the House bill.

Both approaches emphasize the role of states in workforce development. The Senate bill asks states to submit a unified statewide plan to the federal government covering all job training, employment services and vocational rehabilitation programs to help streamline administration of the programs. It consolidates some programs and creates an innovation fund to help identify best practices.

The House version consolidates the current system into a block grant program that centralizes control at the state level. Governors would have more input over local workforce development efforts than they do under the current system.

Critics of the current system say it comes with too much overhead. “You have the money that goes to the states, the state takes their share of it and then it gets down to the locals, and the locals take their share of it, then the locals pass it out to multiple contractors, and they take their share of it,” Todd Gustafson, who oversees workforce development services in three Michigan counties, told a House panel in February. “So by the end of the day, the job seeker or the customer in this case aren't getting served as well as they can.”

But critics of the House bill worry that it would move too much control away from the local level. The National League of Cities, which supports the Senate bill, said the House bill would dismantle the country's workforce development system and starve it of needed funding.

“Like all block grant programs, the workforce development system would be more vulnerable to funding cuts and give states more discretion to pick participants according to the ideological predispositions of their governors, rather than on the basis of need,” Neil Bomberg, the group's program director, said on its website.

Aside from the set-aside issue, the governors don't agree on the details of exactly how the massive Workforce Investment Act and its myriad programs should be structured or even how much money should be spent overall.

Still, they agree on a few key principles, according to NGA. They want increased flexibility to transfer federal funding among programs and to end the eligibility requirements for certain workers. They support a statewide and regional focus, with less local involvement, as a way to reduce administrative costs and leave more money for worker training. They also want more authority to appoint members and direct the work of their state Workforce Investment Boards, which oversee the programs.

NGA's Wodiska is confident that states will regain the flexible funding they have lost. "At this point in time, it's a process question,” she said.  "I couldn't be complimentary enough to the support that the governors have received in both the House and the Senate to correct a mistake that was made. Now it's working through the process to figure out how to fix the mistake."