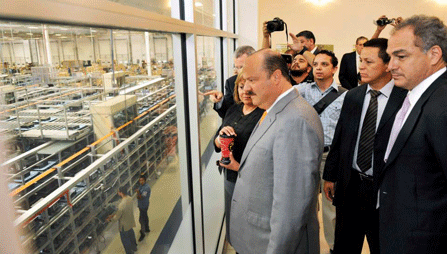 With her Mexican counterpart, Chihuahua Gov. César Duarte, Martinez last week promoted their joint plan for a massive new commercial area straddling the border. Together, they want to build a transportation and manufacturing hub that would capitalize on the recent surge in the Mexican economy.

New Mexico has been working for years to lay the groundwork for development of this desert expanse, which is just west of El Paso, Texas. Its chief selling point is an international crossing free from the traffic bottlenecks of the bridges in El Paso and further east along the Rio Grande.

The New Mexico plan is one of many efforts along the border to lure more business to local crossings. Key ports of entry, including those in San Diego and Nogales, Ariz., are slated for improvements. U.S. Customs and Border Patrol has agreed to increase staffing at checkpoints in California, Texas and Florida if local authorities pick up the bill.

The border crossings are seeing an uptick in traffic, as trade between the United States and Mexico grows. In 2012, a record 5.1 million trucks crossed the border. Trucks carry 80 percent of goods between the countries.

“Trade between our countries has exploded,” said Simon Rosenberg, president of New Democrat Network, a left-leaning think tank based in Washington, D.C. American trade with Mexico now exceeds U.S. trade with Germany, Japan and the United Kingdom combined, he noted.

The boom comes as companies selling to Americans rely more heavily on Mexican factories to produce their goods. Mexico is becoming more attractive, because wages are rising in China and transportation costs are increasing with the cost of fuel.

What happens on the border could affect broad swaths of the U.S. economy, Rosenberg said. Mexico is the third-ranked country for imports into the United States, and it is the second-largest market for U.S. goods abroad. It is the first- or second-ranked destination for exports from 22 states.

But goods often cross the border multiple times before they become final products that reach store shelves or auto dealerships. In fact, American parts make up nearly two-thirds of Mexican products sold in the United States.

New Mexico and the Mexican state of Chihuahua are planning a 70,000-acre economic center that straddles the border near San Jerónimo in Chihuahua and Santa Teresa in New Mexico. (Google Maps)

Even with so much riding on trade with Mexico, Congress has focused more of its attention on border security. Heightened safety measures designed to stop drugs, weapons, terrorists and unauthorized immigrants at the border also slow the flow of trade.

“Mexico is a pillar of the U.S. economy, without a doubt, but we're also working through our security measures on our border,” said Erik Lee, executive director of the North American Research Partnership.

For years, the Border Patrol got a huge infusion of money for staff, vehicles and equipment to patrol the areas between the ports of entry. But while the ranks of their green-shirted colleagues grew by leaps and bounds, the blue-shirted customs officers at the ports got relatively little.

Because of homeland security concerns after the September 2001 terrorist attacks, no new land ports were built between the U.S. and Mexico until 2009, which Lee said posed “huge challenges for both commerce and security.”

The immigration package recently passed by the U.S. Senate emphasizes border security, even though it also addresses border backlogs. It would add 3,500 customs agents, on top of the 22,000 working now. But it would also double the size of the already ubiquitous Border Patrol along the southern border to 38,405 officers.

In the Santa Teresa area, U.S. customs officials are working on a plan to station officers at a Foxconn plant in Mexico, so the computer parts manufacturer can have its trucks clear customs before they even get to the border. Pre-cleared trucks would then be able to use a dedicated lane at the Santa Teresa crossing.

Francisco Uranga, a Foxconn executive who led the governors on a tour of the company's factory last week, said the presidents of both countries supported the idea. But actually putting the program in place has been frustratingly slow, because of security concerns.

“No terrorist that has done any damage to this country came through the Mexican border, but all of the attention is being put on us,” he said.

Cross-border trade is at the heart of plans to transform the region around Santa Teresa, which has already seen significant changes in recent years.

The port itself just underwent an $11 million expansion paid for by federal stimulus funds. The crossing today handles some 400 trucks a day between 6 a.m. and midnight, or about half of its new capacity. New Mexico officials have asked the federal government to keep the port open around the clock.

But the biggest change on the horizon for Santa Teresa is a new $400 million Union Pacific rail yard, scheduled to open in 2015.

Its current facilities in El Paso are hemmed in by the city, but the New Mexico location offers the company plenty of room to grow. The new terminal will let the company fuel its trains, inspect them and switch crews all in the same place.

New Mexico lawmakers helped attract Union Pacific to the area by eliminating the state's tax on locomotive fuel to stay competitive with Texas, which does not have such a tax.

Eventually, the plan promoted by Martinez and Duarte calls for a rail line crossing the border in Santa Teresa.

State officials also gave a boost to the area by raising the weight limit on trucks entering from Mexico within six miles of the Santa Teresa crossing. Jerry Pacheco, executive director of the International Business Accelerator, said the change has attracted seven companies to Santa Teresa in the last two years.

New Mexico officials also set aside $5 million this year to upgrade the area's water and wastewater system. Other infrastructure improvements, such as a four-lane highway connecting the border checkpoint to a nearby interstate highway, are already in place.

“Our motto is to keep infrastructure ahead of development,” Pachecho said.

Coordinating infrastructure on both sides of the border can be difficult, and Santa Teresa's backers say a key selling point for the New Mexican project is the shared plan with the Mexican state of Chihuahua.

New Mexico officials hope the improvements in Santa Teresa will attract more residents to the area, but many of the new jobs will also likely go to Texans. El Paso is closer to the crossing than Las Cruces, the nearest major city in New Mexico.

Union Pacific, for example, expects that building the Santa Teresa rail terminal will create 3,000 jobs during construction. Once complete, the facility will employ 600 people. Between 200 and 250 of them will be relocated from Union Pacific's existing El Paso rail yards, the railroad says.

Bernardo Ayala, Union Pacific's vice president for Mexico markets, said the company does not look at decisions of where to expand as a competition between states.

“It's a region, it's a community. It's well-connected and well-integrated,” he said of the El Paso area. “(Union Pacific's expansion) is going to drive more jobs. Mexico, Texas and New Mexico are looking for that in terms of providing economic stability.”

Texas Gov. Rick Perry, a Republican, for years has publicly wooed companies from other states.

But Texas Secretary of State John Steen, who leads the state's outreach efforts with Mexico, said he was not troubled by New Mexico's expansion in Santa Teresa and Union Pacific's decision to expand there.

“We put a big emphasis on recruiting businesses into Texas, but we don't do it in a negative way,” Steen said. “We enjoy the competition. Sometimes it works in your favor, and sometimes it goes against you.”

But Martinez wants New Mexico to compete with Texas and other states.

“All our states do — and that's what they're supposed to do —compete with one another,” Martinez said. Businesses can “go anywhere in the world. We want them to look at New Mexico.”