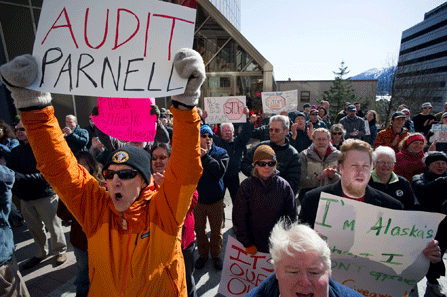 State revenues in 2013 are up 5.3 percent from this time last year, but state officials are worried the gains will dissipate in 2014, according to a new report from the National Conference of State Legislatures.

State revenues in the current fiscal year got a boost from taxpayers who accelerated tax payments on their capital gains to avoid any fallout from the impending “fiscal cliff.” These capital gains taxes generated an 18.4 percent rise in personal income tax collections, according to a report from the Rockefeller Institute of Government.

The absence of that revenue wrinkle in fiscal year 2014, coupled with the still tenuous condition of the U.S. economy, is darkening next year's budget forecasts for states. Additionally, the largest spending categories—Medicaid, higher education and corrections—threaten to outpace revenue growth next year, the NCSL report said.

Even the recent revenue increase is complicating the budget process for some states, because it's hard for them to move from “holding things really tight” to a slight expansion, according to George Naughton, Oregon's budget director and the president of the National Association of State Budget Officers.

“What we are really dealing with now is we are recovering more slowly than expected,” Naughton said. “Now it's positioning ourselves to take advantage of that.”

A number of states raised sales taxes and gas taxes this year to bolster their budgets. Maryland and Virginia increased gas taxes to pay for transportation projects. Other states, including Iowa, Maine and Minnesota, levied sales taxes on their residents' online purchases. Federal legislation that would require online retailers to collect sales taxes is pending in Congress.

States have lost billions in sales tax revenue from online purchases, according to Lucy Dadayan of the Rockefeller Institute. In states that levy sales taxes, they make up about one-third of all revenue, Dadayan said.

Many states also cut taxes this year. In one of the largest tax cuts, Alaska reduced taxes on energy companies to dissuade them from leaving the state for the natural gas boom in the lower 48 states. Alaska's tax cut is being challenged on the 2014 ballot. If it remains in place, the state anticipates a revenue decline of at least 15 percent.

RELATED
Topics
Politics and Campaigns Economy Revenue and Spending
About Stateline
Stateline’s team of veteran journalists provides daily reporting and analysis on trends in state policy.
Learn More
Media Contact
Jeremy Ratner
Director, Communications
202.540.6507
Sign Up
Sign up for our daily update—original reporting on state policy, plus the day's five top reads from around the Web.