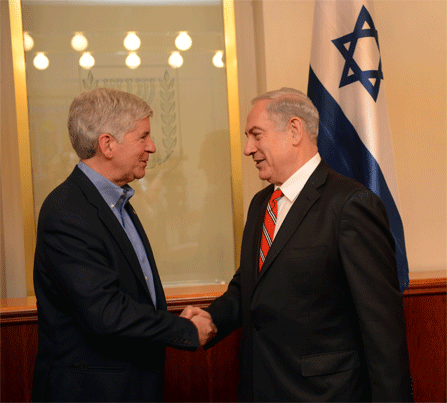 Governors are flocking to Israel as a hub of innovation and potential trading partner. Michigan Gov. Rick Snyder, left, meets Israel Prime Minister Benjamin Netanyahu in Tel Aviv during a visit to Israel this summer to discuss ways to increase trade and investment opportunities. (Photo courtesy of governor's office)

Israel has become a popular destination for U.S. governors hoping to spur their states' economies by tapping into the technology of a country some call “Start-Up Nation.”

States with robust technology sectors such as California, New York and Massachusetts have been particularly active in seeking out business ties with Israel, but so have less likely states such as Delaware and New Mexico.

“Israel is an amazing source of innovation that drives a significant percentage of the American economy in our most important sectors,” said David Goodtree, a consultant who helped organize Massachusetts Gov. Deval Patrick's trade mission to Israel two years ago.

Billionaire investor Warren Buffett has called Israel "the leading, largest and most promising investment hub outside the United States,” while Microsoft founder Bill Gates has said that the “innovation going on in Israel is critical to the future of the technology business.”

Though Israel is a nation of less than 8 million people, it has 65 companies listed on NASDAQ, more than any other country except the United States and Canada. In their bestselling 2009 book, “Start-Up Nation: The Story of Israel's Economic Miracle,” authors Dan Senor and Saul Singer note that Israel has the highest number of startups per capita of any nation in the world.

Senor and Singer attribute Israel's success to several factors, including the social networks and leadership training provided by the country's mandatory military service; the emphasis on questioning and skepticism in Jewish tradition; and an open immigration policy that creates a constant influx of creativity.

Whatever the reasons for Israel's startup success, it has attracted a steady flow of U.S. governors in recent years.  At least four governors have made the trip this year, and at least 11 have visited in the last three years. Texas Gov. Rick Perry is planning a trip in October.

“Michigan offers tremendous opportunities to Israel's many startup tech companies interested in bringing their products to market,” Michigan Gov. Rick Snyder, a Republican, said earlier this summer during his trade mission to Israel.

In many cases, these efforts have borne fruit:

The strong and somewhat surprising connection between Israel and New Mexico is due to Intel Corp., the world's largest semiconductor chip maker. The company is headquartered in Santa Clara, Calif., but it has a facility in Rio Rancho, N.M. that employs 3,500 workers, and several manufacturing and development operations in Israel that employ 7,800 people.

Water technology is another important trade area between New Mexico and Israel, both of which have desert climates, said Jon Barela, secretary of economic development for New Mexico. Some of the defense-related technologies coming out of New Mexico's Los Alamos National Laboratory also hold a “tremendous amount of potential” for doing business with Israel, Barela said.

While increasing exports to Israel is important for many governors, the bigger prize for some is to lure Israeli startups to their states. Israelis ranked second, behind Indians, in starting semiconductor firms in the United States between 2006 and 2012, and tied for second with Canadians and Romanians for the most startups in the United States in the computer and communications fields, according to a report from the Kauffman Foundation of St. Louis, which researches entrepreneurship.

Some 200 Israeli startups are estimated to be located in New York City, said David Bratslavsky, executive director of the U.S. Israel Business Council in Manhattan.

Silicon Valley is also a favorite destination, but Israeli-founded firms made up only 3 percent of the engineering and technology companies in California's large market between 2006 and 2012. By contrast, in Massachusetts Israeli firms comprise 16 percent of the tech total, second only to firms from India, according to the Kaufmann Foundation.

In Massachusetts in 2009, nearly 100 companies with Israeli founders or Israeli-licensed technologies generated $2.4 billion in direct revenue and employed nearly 6,000 state residents, according to a report commissioned by the Combined Jewish Philanthropies of Greater Boston. Many of these firms specialize in information technology, security software storage, medical devices and biotech.

U.S. states are trying to capitalize on the fact that Israeli companies must globalize early to succeed, since their home market is so small. Plus, Israel doesn't have a stable regional market, since many of its Arab neighbors refuse to do business with it.

"We recognize that when businesses in Israel start up, they have to think beyond Israel from day one because the market here isn't big enough,” Delaware Gov. Jack Markell, a Democrat, said during a trip to Israel last month.

Markell, Delaware's first Jewish governor, said in a radio address after his trip that he traveled to Israel “to learn, to make connections, to make sure that we have additional Israeli companies coming to Delaware to incorporate and hopefully doing business here as well.”