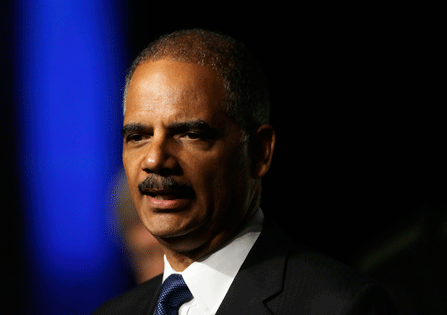 Attorney General Eric Holder speaks to the American Bar Association's annual meeting, calling for major changes to the nation's criminal justice system that would cut back the use of harsh sentences for certain drug-related crimes. (AP)

In a major policy change already in place in some states, Attorney General Eric Holder Monday announced that the federal government will move away from mandatory prison sentences for drug offenses and will release some nonviolent elderly prisoners who pose no public safety threat.

“With an outsized, unnecessarily large prison population, we need to ensure that incarceration is used to punish, deter and rehabilitate — not merely to warehouse and forget,” Holder told the annual meeting of the American Bar Association in San Francisco.

I have today mandated a modification of the Justice Department's charging policies so that certain low-level, nonviolent drug offenders, who have no ties to large-scale organizations, gangs, or cartels, will no longer be charged with offenses that impose draconian mandatory minimum sentences,” Holder said.

Beginning with the 1986 passage of the Anti-Drug Abuse Act targeting the crack cocaine epidemic sweeping American cities, Congress and state legislatures have mandated long-term prison sentences for almost all drug crimes to deter the spread of drug trafficking and addiction. Federal drug sentences begin at a minimum of five years in prison without parole, and judges have no discretion to issue lower sentences.

Nearly 30 years later, drug offenders make up 47 percent of the total population in federal prisons, about 89,909 prisoners as of June 29. And according to a new report from the Congressional Research Service, only about 20 percent of those inmates were charged with high-level drug trafficking. The rest of them were convicted of drug dealing or drug possession, according to the report.

His plan mirrors the approaches taken in many states to reserve prison resources for violent criminals and funnel drug offenders into treatment programs or community supervision. Holder praised efforts in 17 states to redirect criminal justice resources into community-based treatment and supervision, a plan known as Justice Reinvestment.

States have been relaxing mandatory minimum sentencing requirements over the last 10 years. For instance, in 2005 and 2009, New York made major changes to its 1973 Rockefeller drug laws, which imposed harsh mandatory sentences on anyone convicted of any drug offense from dealing and possession to serving as a lookout during a drug deal.

By June 2012, the number of drug offenders in state prisons decreased by more than 30 percent, according to the New York Division of Criminal Justice Services. Rhode Island and Delaware also repealed most of their mandatory minimum drug laws, according to Families Against Mandatory Minimums, which advocates for state and federal sentencing changes.

“Considering the applications of nonviolent (elderly) offenders — through a careful review process that ultimately allows judges to consider whether release is warranted — is the fair thing to do,” Holder said.  “And it is the smart thing to do as well, because it will enable us to use our limited resources to house those who pose the greatest threat.”

States have also enacted policies to release elderly prisoners who are no longer a public safety risk and whose health conditions present a huge expense to the prison system. According to a 2012 ACLU report, 246,600 inmates over age 50 were incarcerated across the country. The average cost per year for these inmates was $68,270 each.

Laws in Louisiana, Maryland and Virginia allow for the release of elderly inmates who pass a risk assessment showing they are no longer a danger to the public.