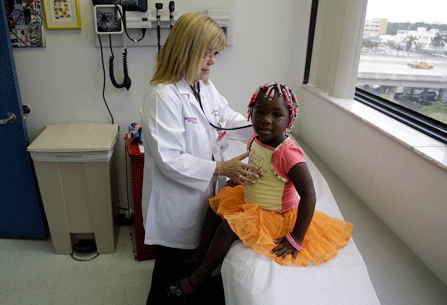 Dr. Ileana Fuentes examines Ashley Jeannithe, 3, at a health care center in Miami that primarily serves uninsured patients. Florida, a target of Enroll America's campaign to educate people about health insurance coverage under the Affordable Care Act, is not expanding Medicaid or running its own health insurance exchange. (AP)

Obamacare's new health insurance exchanges are scheduled to open for business Oct. 1. But a recent survey shows that nearly 80 percent of those who stand to benefit have no idea what an exchange is or how to get the health insurance subsidies they will offer.

That's where the private nonprofit Enroll America comes in. The group, which has strong ties to the Obama administration, has been using more than 100 staff and about 3,000 volunteers to go door-to-door and to stage community events this summer to inform people about the opportunities for health care coverage on the exchanges.

Its president, Anne Filipic, announced Monday that the group would focus most of its effort on 10 states with the largest number of uninsured and the lowest level of state-funded outreach: Arizona, Florida, Georgia, Illinois, Michigan, New Jersey, North Carolina, Ohio, Pennsylvania and Texas. All but Illinois have Republican governors.

California was left off of the list even though it has the most uninsured residents and among the highest percentage of uninsured population in the country at 20 percent. But with more than $600 million expected in state and nonprofit funding to support outreach efforts locally, Filipic said her group chose to support California's efforts rather than launch its own.

“Our focus,” she said, “is on states that do not have a robust infusion of resources.” In the remaining 40 states, the group's regional directors will be working without staff to support state-led and other local efforts.

When the exchanges open, anyone who does not already have employer-sponsored insurance will be able to comparison shop for coverage and find out whether they qualify for federal subsidies to help pay for their policies. Visitors to federally funded websites and call centers will also find out whether they qualify for Medicaid or the Children's Health Insurance Program, and they'll be able to sign up for that coverage immediately. Policies purchased on the exchange will take effect Jan. 1, 2014.

Enroll America stressed that it is not helping people sign up for insurance but informing them of their options. In the 10 target states, Filipic said the goal is to recruit and train volunteers and work with existing organizations, such as schools, churches, community health centers and other groups to build an infrastructure that will spread the word on Obamacare starting now.

The Obama administration is scheduled to announce Thursday how it will dole out $54 million in federal money to hire so-called “navigators” who will help people actually sign up.