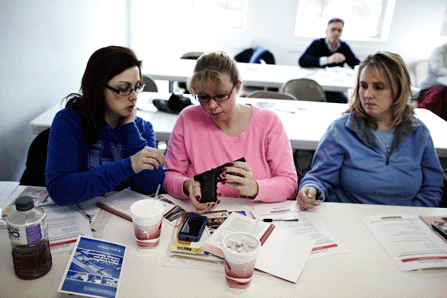 (UPDATED 08/14/2013: Ohio attorney general's office has corrected its training numbers in the final paragraph to 7,122 trained)

Back to school usually means new notebooks, new clothes and new teachers. But this year it also means more security, after the shooting deaths of 20 children and six adults at Sandy Hook Elementary School in Newtown, Conn.

“We would be remiss if we didn't take a lesson from the Sandy Hook shooting, as horrible as it was,” said North Carolina Republican Rep. Craig Horn. He co-sponsored the state's new plan to allow retired police officers or military veterans to serve as volunteer school security officers if they meet requirements set by local sheriffs and police chiefs.

More than 450 bills were introduced in statehouses this year on school security measures. After thousands of hours of debate, what emerged at the state level are relatively small-scale plans to pay for security upgrades like adding classroom-door locks that can be used from the inside and outside, fortifying school entrances, installing security cameras and allowing teachers or volunteers, in very limited circumstances, to carry guns on campus.

None of these are transformative solutions, said Ken Trump, a Cleveland-based school safety consultant who most recently worked with the Connecticut safety council to advise them on best practices in building safety. Trump noted that just a year ago, all the focus in school safety was on preventing bullying, which has moved to the back burner in favor of emergency drills and preparing for what to do if there's a shooter in a school.

“Schools are trying to reassure parents … but we haven't seen a substantial investment to restore the devastating cuts to school resource officers and restart coordination with local first responders,” Trump said. “It's really going to come down to parents to ask those questions if they want to sustain investment in their children's schools.”

In Ohio, South Dakota, Texas and North Carolina, state legislatures empowered local districts to decide if they want to allow a trained school employee or volunteer to be an armed guard at a local school.

In North Carolina, there will likely be few schools that participate, said Eddie Caldwell Jr., general counsel for the North Carolina Sheriffs' Association, since both the local sheriff and the school board have to agree, and many sheriffs are skeptical of having an armed non-law enforcement officer in a school.

However, the idea gained enough political traction to become law in four states and encourage teachers nationwide to sign up for gun training. The plan was also endorsed by Ohio Republican Attorney General Mike DeWine, both in response to the shooting in Newtown and a school shooting earlier in 2012 at a Chardon, Ohio, high school which left three students dead.

“If I was on a school board…I would seriously consider having someone in that school who may be an ex-police officer, someone who has significant training, who had access to a gun in a school,” DeWine said in December.

DeWine's office issued a report in June with recommendations for schools to develop school safety plans, including model directions to teachers to use any means necessary to stop a shooter, including throwing books, and assaulting or choking the shooter. All Ohio schools are required to file an updated school safety plan with the attorney general's office.

In Texas, if local school districts give the OK, schools will select one anonymous staff member per every 400 students to carry a gun on campus, to act only if they identify an imminent threat. Training for that program will likely begin in the spring of 2014, according to the attorney general's office.

South Dakota opens its program to school employees or community volunteers, who must pass a criminal background check, go through an interview with the school board and pass a basic law enforcement training course before they can serve as an armed guard at a school. South Dakota Republican Attorney General Marty Jackley just approved the training guidelines last week and while no one has signed up yet, the attorney general's office expects to begin offering training within the next month or two, according to a spokesperson.

“The sheriff's department has their own reputation on the line with this, so we feel confident they'll pick the right people,” said Horn. He said volunteers will go through a strict vetting process so that, for instance, a military veteran with post-traumatic stress disorder is not guarding an elementary school.

“We're not playing cowboys and Indians here,” Horn said.  “We have faith and confidence that the sheriff's department will only put their neck on the line for the right people.”

So far, no North Carolina district has expressed interest in the plan, so armed volunteers aren't likely to end up schools until the 2014-2015 school year.

While some lawmakers are on board with the idea of a trained volunteer carrying a gun in a school, others are saying no. After hearing about the Arkansas town of Clarksville's plan to give teachers free firearms training and a $1,100 stipend to purchase a handgun, Arkansas Attorney General Dustin McDaniel issued a quick opinion clarifying that guns are not allowed on school campuses. At least 12 other school districts also had begun training teachers to act as school security.

At the national level, the School Superintendents Association is firmly opposed to having teachers and administrators carry guns. Arming teachers has also been lambasted by teachers' unions and public health experts.

“Guns have no place in our schools. Period,” said the nation's two largest teachers' unions, the American Federation of Teachers and the National Education Association, in response to the National Rifle Association's proposal to post at least one armed teacher or administrator in every school in the country. And given the statistical reality of being a gun violence victim in school—which is about one in 1 million, according to a joint report from the U.S. Department of Education and the U.S. Secret Service—having a gun to reduce gun violence may actually do the opposite.

In Connecticut, teachers rejected the idea of carrying guns in the classroom and the state School Safety Infrastructure Council is looking at simple solutions like locks or communications systems.

During the 2010-2011 school year, there were 11 homicides of children ages 5-18 at school, which was less than 2 percent of the total number of homicides of school-age children for each year going back to the 1992-1993 school year, according to a report  from the Congressional Research Service.

In 2007, the most recent year for which a national count is available, there were just under 20,000 trained school resource officers in the nation's 98,000 public schools, according to the Department of Justice. Only about 25 percent of those officers were in elementary schools. That will likely increase this year, said Mo Canady, the executive director of the National Association of School Resource Officers.

Regardless of which state they live in, students heading back to school this month can expect to see more police officers, either designated school resource officers or regular police, said Canady.

Students and teachers will also have to participate in more drills to prepare not just for an active shooter, but for tornadoes, fires or other disasters. Since January, 7,122 Ohio teachers and staff have received specialized training on how to respond, without a gun, to a shooter in the building. There are 28 more scheduled trainings in school districts this year. This training is also happening in Indiana, Oregon and Michigan.

The Department of Homeland Security has an online course for the public to learn how to respond to an active shooter.