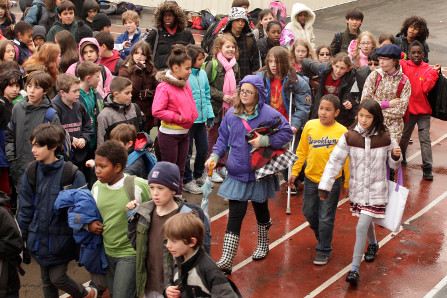 New York City fifth graders enter a Brooklyn elementary school. Many states say budget cuts have made it a challenge for them to implement the Common Core State Standards. (AP)

Cuts to state education budgets are hurting the ability of some states to implement the Common Core State Standards, according to a new survey.

The survey, by the Center on Education Policy (CEP) at The George Washington University's Graduate School of Education and Human Development, asked state education officials about implementation of the K-12 English and math standards that have been voluntarily adopted by 45 states and the District of Columbia, along with Minnesota for English only. Forty states responded to the survey, which was conducted from February through May of 2013.

The Common Core State Standards are intended to ensure that students who graduate from high school are prepared to begin careers or enter college without taking remedial courses.

Twenty states said their K-12 education budgets are either lower or the same as last year, and 28 states said funding for their state education agencies is either flat or lower than last year.   Of the states with flat or decreased funding in either category, 12 reported having to scale back their Common Core efforts.

Several states also reported having to cut back on technology purchases for the Common Core, such as computers or software.

Less than a quarter of the states that responded said they had adequate staff expertise, staffing levels and resources to implement the Common Core.

Despite the cuts, Maria Voles Ferguson, executive director of CEP, said states do not appear to be having second thoughts about the new national standards. All 40 states that responded to the survey agreed that the Common Core is more rigorous than what they use now.

“States deal with this all the time – they're always underfunded,” Ferguson said. “They're always behind the ball, always having to make cuts that they don't want to make so it's not like this is new for them.”

Ferguson said the states are also optimistic that sharing standards and assessments with other states will create economies of scale and eventually save money on things like curriculum guides. Thirty-seven states indicated they had already collaborated with at least one other state on implementation of the Common Core.