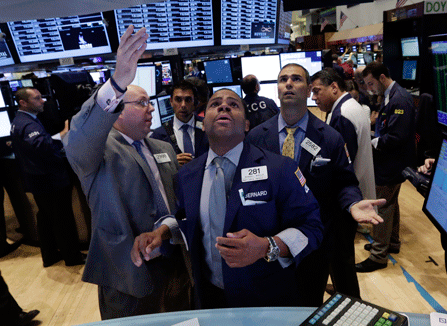 State tax collections in the first quarter of 2013 were up 8.6 percent, but much of the growth came from robust capital gains collections, the result of a rising stock market and fears of future tax hikes. (AP)

Still, the outlook for the rest of the year is uncertain. The report attributed much of the growth to an 18.4 percent rise in personal income tax collections, an increase driven largely by high-income taxpayers accelerating their capital gains realizations in 2012 to avoid a possible tax increase. This growth can't be expected to continue because it was caused in large part by taxpayer behavior, the report said.

“A lot of forecasters don't know what to expect because they don't know how much income was accelerated from 2013 to 2012,” said Lucy Dadayan, senior policy analyst at the Rockefeller Institute of Government and one of the report's authors. “It's an issue because it's really hard to base a forecast on taxpayer behavior.”

On the whole, state personal income, sales and corporate income taxes have been recovering far more slowly than in past recessions. Sales tax collections continue to be particularly sluggish. Overall sales tax collections are still down a half percent from five years ago after adjusting for inflation, according to the report.