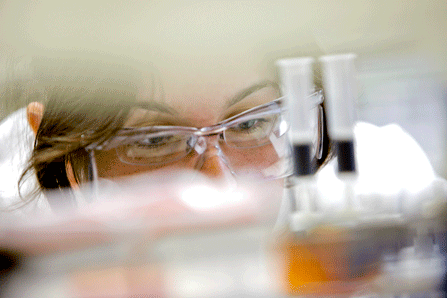 A researcher works in a lab at Momenta Pharmaceuticals in Cambridge, Mass., which makes generic versions of biologic drugs. In many state legislatures, manufacturers of brand-name biologics have clashed with companies that make generic copies. (Getty)

The year 2013 began with the promise of a state-by-state, coast-to-coast battle between the makers of brand-name medications derived from living organisms—known as biologics—and those who to make and sell copies of those drugs.

The battle has turned into a rout, at least for now. In state after state, the brand-name makers—led by the pharmaceutical giants Amgen and Genentech—have been unable to convince state legislatures to require pharmacists to notify doctors (and sometimes patients) when they substitute generics for brand-name biologic drugs. Manufacturers of copies fiercely opposed such a requirement, which they said would put them at a competitive disadvantage.

Oregon, Utah and Virginia all adopted notification requirements, but with sunsetting provisions that will take effect before any of the knock-offs reach the market. Only one state, North Dakota, passed the measure the brand-name manufacturers sought.

“State legislators accepted that there was absolutely no need to push this type of legislation” said Brynna Clark, senior director of state affairs for the Generic Pharmaceutical Association, which took the lead in organizing the effort against notification requirements. “Nobody's hair was on fire.”

Measures are still alive in California, where the prospects for passage look bright, and in Pennsylvania and Massachusetts.

Most believe it will be at least two years before any copies of biologics receive approval from the Food and Drug Administration (FDA). But the skirmishes in 18 states this year give a sense of the high stakes involved.

Biologics already account for roughly a quarter of the $320 billion spent annually on medications in the U.S., according to IMS Health, and biologic medicines are expected to command ever larger portions of the prescription drug marketplace. The Congressional Budget Office has estimated that substituting biologic doppelgangers for brand names would reduce federal Medicaid and Medicare spending by $25 billion over 10 years.  The CBO estimates that total federal spending on prescription drugs during the same period will total $500 billion.

The Affordable Care Act calls for an abbreviated approval process for the biologic copies, as a means to promote competition and reduce costs. While the federal government will determine whether particular biosimilars are interchangeable with the originals, it will be up to the states to determine the exact policies regarding substitutions.

Companies that make the copies say their products should be treated no differently than generic chemical drugs. By state law, pharmacists can (and in some cases, must) substitute cheaper generics for brand-name medications once the original patent has expired, unless otherwise directed by the doctor or, in some states, the patient.

But, there are big differences between copying chemical drugs and copying biologic drugs.

Until the 1970s, virtually all manufactured medicines were derived from chemicals. They are sometimes called “small molecule” drugs because they are composed of relatively few atoms and have stable, well-defined chemical structures, making it relatively easy to produce exact duplicates.

Biologics, which are used to treat patients with cancer, blood irregularities, psoriasis, and auto-immune and neurological disorders, are the result of complicated biological manufacturing and testing processes. They have as many as 20,000 atoms, and they interact with the body in different ways from chemically-derived medicines.

As a result, it is virtually impossible to make exact copies, but only something very similar. Hence, the generic versions are often referred to as “biosimilars,” “bioequivalences” “biocomparables,” “me-too biologics” or “biobetters.”

Although biosimilars are already on the market in Europe, none have yet been approved for the U.S. market (U.S. original patent periods are longer). The FDA has, however, issued draft rules for the approval process. Most expect the first biosimilars to gain FDA approval in 2015.

But battle lines have already been drawn. Amgen, which makes both biologics and biosimilars, and Genentech have led the efforts to promote passage of state notification laws. Together the two companies contributed about $650,000 to state legislative races in 2012.

Gino Grampp, director of research and development policy for Amgen, said that because biosimilars are not identical to the originals, it is important that physicians be alerted when there is a substitution. Otherwise, if a patient has an adverse reaction to a biosimilar, the doctor may not be able to identify the cause of the problem.

State Sen. Jerry Hill, the Democrat who sponsored the notification bill in California, was persuaded by that argument. “In California, there's real sensitivity to the patient's right to know and patients controlling their own bodies,” Hill said.

But the generic association argues the proposed legislation is a ruse by the brand-name manufacturers to cause anxiety about biosimilars. “It's going to raise trust issues and concerns about these medicines,” said Clark of the Generic Pharmaceutical Association. “Why does my doctor have to be specially notified if these drugs are really OK?”

Clark argues that if the FDA approves a biosimilar as interchangeable with the original product, there is no need to create obstacles at the state level. Biosimilars, she argues, should be treated no differently from generic chemical drugs.

Few doctors object to the substitution of generics for chemical medications, but “there's a real question whether there will be the same level of acceptance among doctors of biosimilars as there are with generics,” said Jack Hoadley, a research  professor at the Health Policy Institute at Georgetown University.

Any signal, such as a notification requirement, that suggests biosimilars are not the equal of the originals could diminish confidence in them among doctors and patients.

Meanwhile, the Generic Pharmaceutical Association has found a potent ally in pharmacists, who fear the notification requirement would be a burden. Their opposition was instrumental in the defeat of Maryland state Sen. Joan Carter Conway's notification bill this year.

“They said it was just too much work,” said Conway, a Democrat.