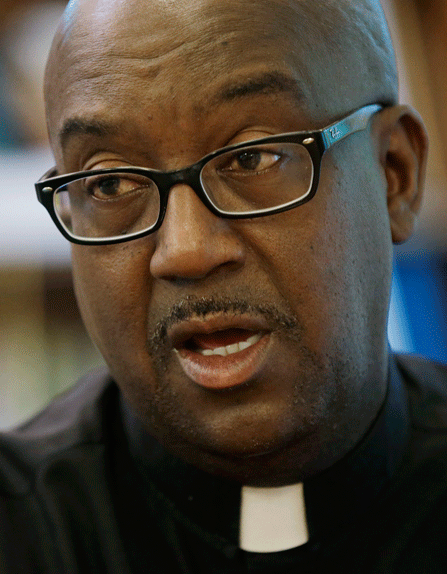 The Rev. Manuel Williams, director of Resurrection Catholic Ministries in Montgomery, Ala., says he has been flooded with calls from interested parents since Alabama launched its new tax credit program for private school tuition. (AP)

Opponents called it a “bombshell” and “sleaziness.”  Backers said it was “historic” and would free low-income students from failing public schools. Hyperbole aside, the Alabama Legislature's last-minute move to create a $3,500 state tax credit for private school tuition is emblematic of a growing movement in the states.

Thirteen states created or expanded tuition tax credits, private school scholarships or traditional vouchers in 2013, according to the National Conference of State Legislatures. Eight states did so in 2012 and seven states in 2011, according to the group.

Private school vouchers have been around for quite a while.  But some state supreme courts have questioned the constitutionality of giving parents public education dollars to send their children to parochial schools.

To get around that issue, states have turned to strategies that are less direct. Some have created tax credits for parents who pay private school tuition. Others are giving tax credits to those who donate to private scholarship funds that dole out money to families who need help paying for private school.

Purchasing power under private school choice programs ranges from a maximum of $250 in Iowa (personal tax credits), to 115 percent of per-pupil public school funding in Maine (for private school vouchers), according to Jeff Reed, communications director for the Friedman Foundation for Educational Choice, a pro-vouchers and tax credits group.

No matter the approach, the effect is the same, according to Josh Cunningham, an education policy analyst at NCSL.  “The state is saying we're going to forgo tax revenue for the purpose of encouraging students to transfer from the public school system into the private schools,” he said.

In Alabama's legislature this spring, a conference committee considering a much narrower piece of education legislation suddenly expanded it—with little debate—to include the scholarship tax credit and a personal tax credit for private school tuition, drawing howls of protest from Democrats and teacher groups.

It took until the middle of June for the state education department to come up with the list of 78 “failing” schools. It defines a “failing” school as one that lands in the bottom 6 percent of state standardized tests three or more times in six years, or one listed as “low performing” in the state's most recent school improvement grant application.

The Alabama Education Association, which represents the state's public school employees, filed a lawsuit to block the plan, but courts have allowed it to proceed. More legal action is pending, but for now the race is on for interested parents to pull their kids out of public schools, sign up for admission to private schools, and take advantage of the $3,500 tax credit program before school starts in a few weeks.  Lawmakers expect a bigger impact next year.

The effect on states' treasuries is up for debate. In a widely-cited 2008 study, Florida estimated it saved $1.49 in per-pupil costs for every $1 it lost in revenue due to the private school tax credits, for a total of $39 million. But other estimates say states lose money on the tax incentives.

Alabama, for example, put aside $40 million in its budget to absorb the anticipated loss from the tax credits, according to Norris Green, director of the Alabama Legislative Fiscal Office.  “Our sense is that $40 million is going to be enough but we don't know. It's a question of how many are going to opt for private schools,” he said. Some $25 million of that total represents lost revenue from the tax-exempt donations to the scholarship funds, and the tax credits to parents who send their kids to private schools account for the rest.

Alabama state Sen. Del Marsh, author of the tuition tax credit program, said his state is being “very responsible” in putting money aside to fund the credits, noting that with Republicans in charge of the legislature the time was ripe to pass the credits. The Anniston Republican also predicted that the program will generate some long-term savings.

“We have an extremely high dropout rate from high school. Many of those incarcerated in prison do not have a high school diploma. The more we can keep in school to get more education, the less likely they will be to end up in the prison system,” he said.  One in four Alabama high school students does not graduate.

But the Alabama Education Association, like the American Federation of Teachers and other teachers' groups across the country, opposes the private school tuition tax credit program, on both fiscal and ideological grounds.

“It's very disheartening, at a time when we are seeing revenue actually go up,” said Amy Marlowe of the association. “That's money we do have available to spend on (public) education and it's going to be funneled to private schools.”

Recovering state revenues are fueling the growth of such programs. For a decade, South Carolina failed to approve a tax credit scholarship program, but it succeeded this year. Wisconsin, which had a voucher program limited to the Racine area, expanded it this year statewide, with up to 500 more students eligible this year and 1,000 next year at a cost of $14 million.

North Carolina replaced its tax credit program with a voucher plan. The vouchers are worth up to $6,000 a year so that low-income families with no taxable income are eligible to participate. Iowa increased its cap on the total value of the tax credits it will grant to $12 million from $8.75 million, and Georgia increased its cap to $58 million from $50 million, according to the Friedman Foundation.

Reed, the Friedman spokesman, emphasized that many of the programs are income-limited or limited to families with special-needs kids. Some 23 states and the District of Columbia now have some kind of program to support private education with state dollars, according to the foundation.

The movement did suffer some defeats this year: In six states, tax credit or voucher programs were proposed but failed to become law. In Montana, a tax credit program was approved by the Republican-led legislature but was vetoed by Gov. Steve Bullock, a Democrat. Texas, too, was unable to get a required super-majority in the legislature to approve the programs.