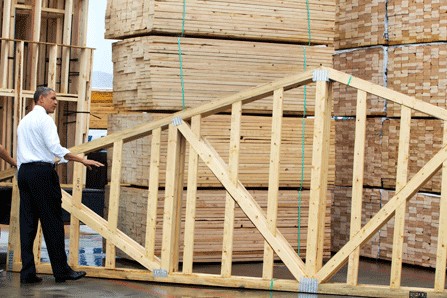 In another sign that the housing market is recovering, a new report shows that mortgage delinquencies dropped in every state and the District of Columbia from a year ago.

The biggest declines were in Arizona and California where the rates of homeowners who were at least 60 days behind in paying their mortgages decreased by more than 40 percent, according to the latest data from TransUnion, a consumer credit reporting company.

The news coincides with President Obama's trip to Phoenix where he called on Congress to replace the government-backed Fannie Mae and Freddie Mac with more private capital. He called the housing market “healing,” with new foreclosures down by nearly two-thirds.

“Millions of families have been able to come up for air, because they're no longer underwater on their mortgages,” the president said.

The two states with the highest mortgage delinquency rates in the nation — Florida and Nevada — also had encouraging yearly drops of 26.8 percent and 28.7 percent respectively, the TransUnion report said.

“Improving house prices and low interest rates have helped some homeowners across the country refinance or sell their way out of mortgage payments they were having difficulty affording," Tim Martin, group vice president of U.S. housing in TransUnion's financial services business unit, said in a statement.

While the new TransUnion numbers are encouraging, many of these same states also still have the most homeowners who owe more on their home loans than the current market value of their property, known as underwater mortgages.

Nevada had the highest percentage of mortgages underwater (45 percent), followed by Florida (38 percent), Michigan (32 percent), Arizona (31 percent) and Georgia (30 percent), according to a June report from CoreLogic, a company that provides information and analytics regarding residential property.

These five states make up for nearly 33 percent of all underwater mortgages, CoreLogic said. 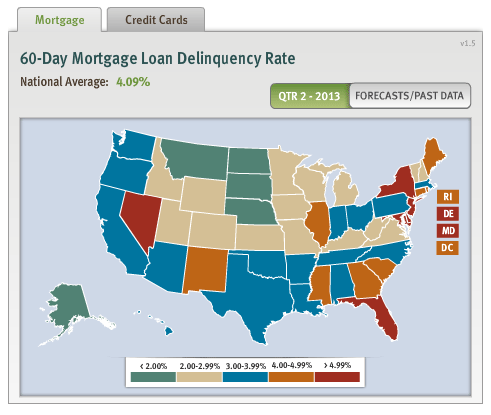