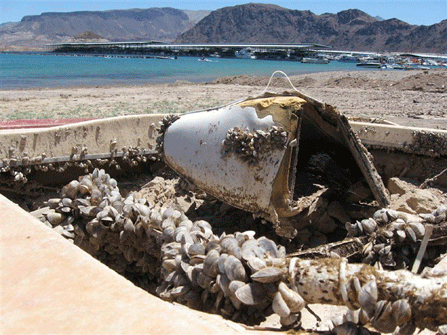 The officials say an infusion of federal dollars would give them the biggest boost, but few expect tightfisted Congress to deliver. In the meantime, they want Washington to tweak a 113-year-old federal law to give them more ammunition against people who help the invaders spread.

The tiny mollusks — the zebra mussel and its close cousin the quagga—have been spotted in more than 600 bodies of water in 27 states, according to the U.S. Fish and Wildlife Service. The animals ravage underwater food chains by sucking up resources fish depend on. They also cling to everything in their path, clogging pipes and the machinery of power plants and water-delivery systems. That has necessitated millions in repairs and, in a few cases, shutdowns.

The mussels, natives of Eastern Europe and Western Asia, were transported to the U.S. in the ballast water of trans-Atlantic cargo ships. They first appeared in the Great Lakes in the mid-1980s, and between 2000 and 2010, they cost that region's water users some $5 billion. The invaders have since crossed the Rocky Mountains, likely hitching a ride on a vacationer's boat (they can survive for weeks out of water).

Their rapid spread threatens water supplies and energy systems in the West, a region heavily dependent upon hydropower and often gripped by drought. In response, state officials have stepped up boat inspections and cleaning efforts in addition to calling for federal help.

“These little critters are a serious threat to the United States,” said Larry Dalton, who retired this year as Utah's invasive species coordinator. In that state, the mussels have hit two lakes and a reservoir and have cost taxpayers up to $15 million for repairs to water-delivery systems.

In 2007, researchers there discovered a quagga infestation in Lake Mead, formed by the Hoover Dam, a key source of water, energy and recreation for states along the Colorado River. They now blanket the lake's bottom and have traveled down canals into Southern California, adding costs to operating the Hoover and Davis dams.

In North Texas, the 2009 discovery of zebra mussels in Lake Texoma, one of the largest reservoirs in the U.S., has strained water supplies in an area that has suffered a years-long drought. The North Texas Municipal Water District is now building a $300 million pipeline that can filter out zebra mussels or other invasive species. Customers are picking up the tab, which has increased some water bills by as much as 15 percent. In the meantime, the district has stopped pumping water from the lake, giving up 28 percent of its normal water supply.

A bill in the U.S. House would add quaggas to a list of “injurious” species under the 1900 Lacey Act, which prohibits trade in wildlife, fish, and plants that have been illegally taken, transported or sold.  If quaggas are put on the list, the federal government could prosecute — criminally or civilly — people who import or transport the mussels across state lines.

Those convicted of felony trafficking under the act could face a fine of up to $20,000, or five years in prison, or both. A misdemeanor violation, a more likely scenario, carries a maximum fine of $10,000 and a year in prison.

“It's a very powerful tool in terms of deterrence,” said Holly Propst, policy director at the Western Governors' Association, which last week released a letter supporting the bill.

The zebra mussel is already on the injurious species list, which also includes certain mongooses and fruit bats, among a host of other creatures. The Fish and Wildlife Service could add the quagga without an act of Congress, but that route could take as long as 10 years.

“In many ways, this is somewhat of a milestone,” Leah Elwell, coordinator of the Western Regional Panel on Aquatic Nuisance Species, said of the proposal. Otherwise, “it basically takes an act of God to put something on the injurious wildlife list.”

Eleven western states already restrict the transport of quaggas, according to a recent Arizona Journal of Environmental Law and Policy article. Five of those states — Idaho, Washington, Oregon, Wyoming and Montana — have not yet found them in their states, but fear their impact.

But state rules vary, and some legal experts say the existing patchwork of regulations doesn't guarantee boaters will inspect their vessels, especially since the rules are enforced by agencies hit hard by cuts under Congress' sequestration.

Stephanie Showalter-Otts, director of the University of Mississippi's National Sea Grant Law Center, points to a case in Washington State as an example of the limits of state power. In October 2012, officials in Spokane stopped a truck carrying a boat that had been hauled from Lake Michigan. Some 100 live zebra and quagga mussels were clinging to the hull, and the truck driver admitted he had also been cited in another state. Two years earlier, Washington officials had cited the trucking firm for the same offense.

Adding quaggas to the Lacey Act would send a stronger message to commercial haulers and boaters, Showalter-Otts said.

But even if Congress changes the Lacey Act, it is unclear how vigorously federal officials would go after offenders: The U.S. Department of Justice tends to care more about drug and gun violations than zebra or quagga mussel incursions.

“It's pretty hard to get a quagga and zebra case in front of a federal magistrate,” said Dalton, the former Utah official. Even so, he said, the legal change would point the spotlight on invasive species across the U.S. — not just mussels, but hundreds of animals, including the Burmese python, Asian carp and several types of beetle.

Changing the Lacey Act also could complicate some interstate water transfers in a region peppered with towns whose survival depends on water found elsewhere. North Texas water officials found that out the hard way.

Once it finishes building its filtration system, the North Texas Municipal Water District plans to resume pumping water from Lake Texoma. But because the lake is on the Oklahoma side of the border and the zebra mussels still live there, Texas officials had to secure a Congressional exemption from the Lacey Act for the interstate transfer.

An “injurious” listing for quaggas could force those managing other infested waters — Lake Mead, for instance — to seek similar exemptions.

Western officials say they understand that issue, even as they push to include quaggas in the Lacey Act. “This is just a really thorny set of problems,” Propst said. 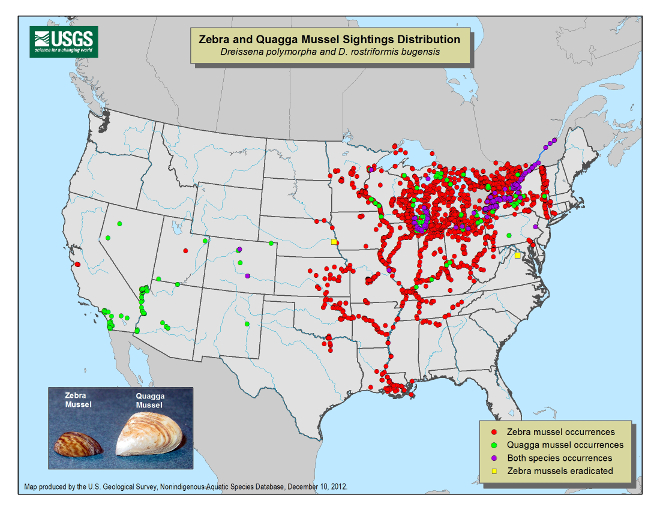