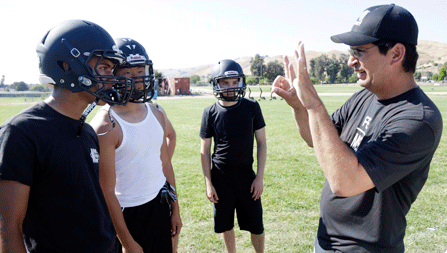 Kevin Bella, who is deaf, talks to members of the Mission San Jose High School football team in Fremont, Calif. The nation's governors are focusing on the role states can play in helping people with disabilities find jobs. (AP)

MILWAUKEE—The 54 million Americans who have disabilities can add an impressive reference to their resumes: the nation's governors.

Governors spent much of this year's summer meeting of the National Governors Association (NGA) talking about how states can help people with disabilities find jobs. Under the direction of outgoing chair Gov. Jack Markell of Delaware, the NGA has been studying the issue for the past year and has released a detailed blueprint  that includes dozens of policy recommendations.

"I believe if each of us focuses on implementing just one thing from this blueprint in our states, then together we can really move the needle on this very important issue," Markell told his fellow governors.

The goal in trying to integrate the disabled into the workforce is to improve their quality of life and boost businesses' bottom lines. Companies such as Walgreens that actively recruit people with disabilities say hiring them improves employee retention and productivity— in addition to being the right thing to do.

The issue has significant implications for federal and state budgets. Nationally, more than 30 percent of the adult population receiving income-based government assistance through programs such as Medicaid and Temporary Assistance for Needy Families has a disability, according to a February report from the Census Bureau. One in three disabled adults between the ages of 18 and 64 was employed in 2011, compared with three out of four adults without a disability.

“It's the change in mind-set away from an expectation of charity to the expectation that you the state want to be my business partner in helping me solve a business problem, and that is in helping me find people with the appropriate level of skills," Markell said of the NGA initiative.

Markell has helped connect Specialisterne, a Denmark-based firm that tries to find employment for people with autism, with Delaware employers.  Jobs in software testing, data quality assurance, programming, data mining and data entry may be especially well-suited for people with autism, many of whom have outstanding memories and an appreciation for detail. The international IT firm CAI, which employs about 700 people in Delaware, has committed to work with Specialisterne to hire people with autism for at least 3 percent of its workforce by 2015.

The NGA recommendations urge states to modify their hiring practices and make adjustments in workplaces to give people with disabilities a fairer shot at getting and keeping state jobs. The recommendations also focus on what states can do to promote private-sector hiring.

Among the report's recommendations:

Governors of both parties have embraced the year-long project. South Dakota Gov. Dennis Daugaard, a Republican who was raised by two deaf parents, said he was initially worried that the initiative was too “fluffy and feel-good” and would not lead to meaningful change.

But Daugaard said he was converted by Markell's pragmatic approach and passion for the subject. He has become deeply involved in the initiative and has assembled a task force of interested stakeholders to implement a comprehensive approach to the problem in South Dakota.

He said he is particularly excited about exposing disabled children and youth to the workplace and training and mentoring opportunities. People with disabilities can lead more fulfilling lives when they find jobs that brings them a sense of purpose and inclusion, and should not be told at a young age that their job will be to receive disability checks, he said.

“We want to start early with parents who have children with disabilities to make sure they don't cheat their children of the self-satisfaction that comes from work and achievement and self-reliance,” he said.

Disability advocates credit the initiative with giving long-neglected problems a needed boost in visibility and momentum. Governors in a number of states have vowed to begin working with disability advocates and business leaders in their states on the complex issues involved in the coming months.

Jennifer Mizrahi, president of the nonprofit RespectAbilityUSA, said the state momentum is particularly helpful, given the lack of movement at the federal level since the 1990 passage of the Americans with Disabilities Act.