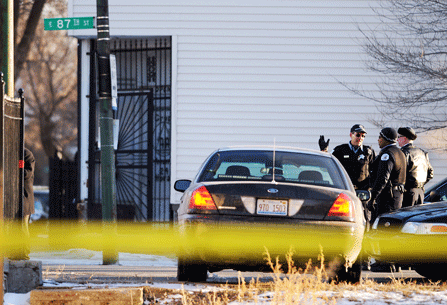 Police stand guard at the scene of a multiple shooting involving multiple teenagers on the south side of Chicago. The city's police superintendent advocated for new state laws to reduce urban gun violence. (AP)

CHICAGO—This city's overall crime rate has declined in the past year, but the police need help from the Illinois legislature to prevent crime from happening in the first place, Chicago Police Superintendent Garry McCarthy told the annual meeting of the National Criminal Justice Association.

“This year, 82 less people were murdered than last year in Chicago, and there are 400 less people with bullet holes this year than there were last year,” McCarthy said. “But Chicago has an unacceptable level of gun violence. We need legislation to fix this problem.”

Speaking to state and local criminal justice officials, McCarthy advocated for a state law requiring gun owners to report lost or stolen guns to police, which is the law in seven states. It's already the law in the city of Chicago, but not the state of Illinois.

In those seven states, a gun owner must go to police and fill out paperwork reporting a lost or stolen gun within a certain amount of time. The goal is to enable police to begin looking for a lost or stolen gun before it is used in a crime. Prompt reporting also helps police catch so-called “straw purchasers,” people who buy guns legally, and then sell them illegally to people who can't buy them on their own, such as people with felony records.

Last year, Americans reported about 190,000 lost or stolen guns to the police, according to a new report from the U.S. Bureau of Alcohol, Tobacco, Firearms and Explosives.  Texas led the nation with 18,874 firearms reported lost or stolen.

Untraceable guns are a big problem in Illinois, McCarthy said. Last year, Chicago Police Officer Del Pearson was nearly killed in a shooting in south Chicago. When officers recovered and traced the gun, they saw that there was only one purchaser listed on the gun—a now-dead woman who purchased the gun in Blue Island, Ill. in 1972 and died in Little Rock, Ark. in 2006.

“When we trace these guns back to legitimate purchaser, they say ‘Thank you for finding this gun, I lost this two years ago and I didn't have to report it stolen.'” McCarthy said.

McCarthy also advocated for a mandatory minimum sentence of three years in prison for possession of a loaded, unlawfully owned firearm, which now is a low-level felony on par with possession of untaxed cigarettes. This change was a major part of Chicago Mayor Rahm Emanuel's legislative agenda at the Illinois statehouse this year, but it met with opposition from legislators concerned about adding any more inmates to the state's overcrowded prisons.

"It's an unfunded mandate, and you know the state of Illinois has a budget problem, of course. We're trying to cut corners and do everything we can to balance the budget," Democratic state Sen. Gary Forby said in an interview earlier this year with Fox News.

This change in sentencing, McCarthy said Monday, would have prevented the murder of Hadiya Pendelton, the 15-year old Chicago girl who was murdered in a Chicago park just one week after playing in her school band during President Barack Obama's second inauguration.

“That crime did not have to happen because the alleged shooter, Michael Ward, was convicted of illegal possession of a loaded firearm just a few months before murder.  We have case after case of that happening,” McCarthy said.

Chicago police have identified 117 cases in 2013 in which someone convicted of illegal possession of a loaded firearm was later the victim or the perpetrator in a shooting, McCarthy said.