If every state expanded Medicaid under the Affordable Care Act, at least 85 percent of the residents in each one would have some form of health insurance, according to a new report by the Kaiser Family Foundation and the Urban Institute.

Current health coverage rates vary from more than 90 percent in Massachusetts, Hawaii and the District of Columbia, to less than 75 percent in Texas and Nevada.

Under the ACA, all Americans are required to have some sort of health coverage starting in January. The ACA envisioned realizing that goal through two mechanisms: expansion of Medicaid and the opening of state health insurance exchanges, where the uninsured who make too much to qualify for Medicaid will be able to buy individual health insurance policies.

But the Supreme Court ruled in June 2012 that states did not have to expand their Medicaid programs under the ACA. So far, 23 states and the District of Columbia have agreed to the expansion, 21 have declined it and six remain undecided.

In the participating states, the expansion will extend Medicaid eligibility to all adults between 19 and 64 earning under $14,856. If every state expanded its Medicaid program, enrollment nationwide would increase from 48.3 million to 66.4 million, according to the study.

An interactive graphic accompanying the report allows users to zoom in on individual states and local communities to see how many of the uninsured would gain access to health insurance once the ACA is implemented next January.

Rachel Garfield, a senior researcher at the Kaiser Commission on Medicaid and the Uninsured, says the interactive will help local communities plan their outreach efforts and also anticipate demands on local medical services.

The graphic also shows before and after portraits of the composition of the uninsured by race, age, gender and whether their primary language is English or Spanish.

In Nevada, for example, the number of uninsured will drop by 43.4 percent, or 266,000 people, but the percentage of the uninsured who are Hispanics would jump from 44.8 percent to 52 percent.

The graphic also allows users to focus on local data. It shows, for example that in the Carson City area of Nevada, the uninsured rate will drop by 48 percent. Men represent slightly more than half of the uninsured now, but they will be slightly less than half afterwards.

The graphic draws on data from the American Community Survey, which is an ongoing statistical survey conducted by the U.S Census Bureau that includes questions on health insurance coverage. The Urban Institute did simulation models to project the numbers of uninsured and Kaiser devised the interactive tool, Garfield said. 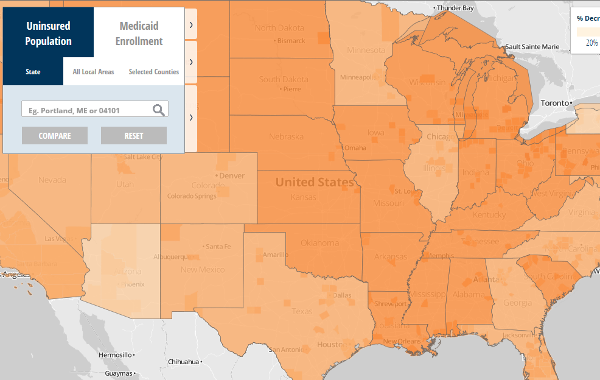